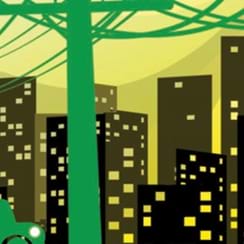 As concerns about climate change and U.S. dependence on imported oil mount, plug-in hybrid electric vehicles (PHEVs) are commanding increasing attention as a promising alternative to vehicles powered by fossil fuels. PHEVs draw power from a gasoline engine and a large-capacity battery that can plug into the grid.

At a January 21, 2009, meeting at the Academy, attendees heard about the benefits of these vehicles and about the engineering, infrastructure, and policy challenges that must be overcome to realize their potential. Mark Duvall of Electric Power Research Institute, Arthur Kressner of Con Edison and Richard Drake of NYSERDA explained that mass-market success for PHEVs will require, among other factors, better and cheaper batteries; a smart, interactive grid; and favorable public policies.

Autoblogreen
This comprehensive site offers a lengthy page on hybrids, a detailed article on China's BYD venture, and much else.

A123 Systems
In January 2009 this leading battery manufacturer announced its application for $1.84 billion in loans under a U.S. Department of Energy program, to build the first U.S plant for mass manufacture of lithium-ion batteries. Want to convert your hybrid to a plug-in? See A123's Hymotion converter kit.

Better Place
This company is pioneering the commercialization of infrastructure for electric vehicles, focusing on "charging spots, battery switching stations, and software that automates the experience."

California Cars Initiative
This nonprofit startup of entrepreneurs, engineers, environmentalists, and consumers is promoting 100+mpg PHEVs. It focuses on public policy and technology development, and on building buyer demand.

MIT Technology Review
The Review's free e-newsletter reports breaking news across many fields. See comprehensive Energy pages for an interactive primer on electric cars, stories on Toyota's plans for an optional Prius plug-in battery pack, GM's plans to build batteries for its electric cars ("battery manufacturing will be central to its business going forward"), a smart grid, and much more. And see its May–June 2008 cover story on "The Gas-Free Car of the Future."

NYSERDA
The New York State Energy Research and Development Authority fosters innovative technologies. See extensive information on power systems programs, a summary of work on PHEVs, and research into the impacts of PHEVs on the grid.

Plug-in Hybrids
A plain-English site by crusaders aiming to build understanding of and demand for PHEVs.

U.S. Department of Energy
DOE has invested in development and demonstration of plug-in hybrid electric vehicles. Argonne National Lab has the lead for simulation, validation, and laboratory evaluation of PHEVs; see its pages on hybrid electric vehicles, batteries, and other transportation subjects. The National Renewable Energy Lab is developing PHEV and advanced power electronics. See, too, DOE's work on the smart grid and its reports on the adequacy of electricity supplies, the smart grid, and energy storage.

Romm J. 2008. The car of the future is here. Salon.com (January 22).
Note Romm's incisive explanation of the challenge of developing adequate battery technology. And see his blog.

Vlasic B. 2009. Detroit goes for electric cars, but will drivers? The New York Times (January 10).
This story is accompanied by many links, a slideshow, and video.

Kressner served as Con Ed's chief chemical engineer and as plant manager of Arthur Kill and Ravenswood Power Generating Stations. He has played leadership roles in issues related to energy policy, energy efficiency, and customer end-use, and in national environmental and public health programs. He has participated in industry advisory groups, community boards, and regulatory panels.

Kressner recently coauthored a book on the application of lean management principles to the energy industry, and he has written extensively on energy efficiency, information technology, management, and computer modeling. An engineer, he holds a BA from Brooklyn Polytechnic and an MA from New York University.

Drake served as program manager of Energy Systems for Mechanical Technology Inc., where he managed technical and financial aspects of energy systems product development. Prior to that, he served as manager of energy engineering, Corporate Engineering, for Mohasco Corporation, where he led corporate energy policy development and managed energy-related capital expenditures.

Drake holds five patents. He earned a BSME from Clarkson College in Potsdam, NY, and an MBA from Union College, Schenectady, NY.