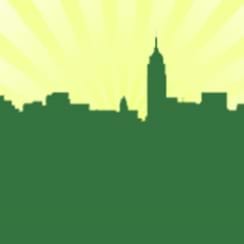 Spurred by concern for the environment and by city and state governments, many building industry players—developers, design firms, and engineers—are focusing on reducing buildings' energy use, among other sustainable, Earth-friendly strategies. But industry-wide change can be slow, and building owners may be reluctant to adopt green practices without some incentive. That leaves government— charged with advancing the public good—a key role to play.

ICLEI – Local Governments for Sustainability
An international association of local governments that provides technical consulting, training, and information to build capacity, share knowledge, and support local government in the implementation of sustainable development.

National Association of State Energy Officials' Database of State Incentives for Renewables and Energy Efficiency
A clickable map of the U.S. with information on energy law and policy for each state.

New York State Energy and Research Authority
NYSERDA's mission is to use innovation and technology to solve some of the state's most difficult energy and environmental problems while improving the state's economy.

U.S. Green Building Council
A nonprofit community of leaders working to make green buildings accessible to everyone within a generation.

Paul DeCotis is deputy secretary for energy for the State of New York and chair of the State Energy Planning Board. DeCotis previously served as director of energy analysis for the New York State Energy Research and Development Authority, where he oversaw state energy forecasting and planning, energy policy analysis and development, legislative analysis, and corporate strategic planning. In addition, DeCotis served in the New York State Energy Office for fifteen years. While there, he served in several capacities, including policy analysis chief. In that role, he supervised policy analysis and development in areas of energy efficiency, renewable energy, alternative energy technologies, and legislation.

DeCotis had previously served as president of Innovative Management Solutions. Since 1985, he has served as an adjunct faculty member at several colleges and universities including the Rochester Institute of Technology, Sage Colleges, Cornell University, Empire State College, and College of Saint Rose.

DeCotis received his MBA from the Sage Graduate School at Russell Sage College, MS in economics from the University at Albany, and BS in international business management from the State University College at Brockport.

John Krieble is a New York State registered architect who has worked for 26 years in the public and private sectors of New York City, and for the past six years has been director of sustainable design at the New York City Department of Design and Construction. This office, which is responsible for developing the agency's sustainable design program, facilitates the incorporation of sustainable strategies into DDC projects through procurement, contract requirements, research initiatives, grants, and training.

Krieble has also been active on a number of interagency working groups charged with improving the City's construction practices from the standpoint of sustainability. Most recently, he has advised the Mayor's office on the rules and reporting forms for the recently enacted Local Law 86/2005 that requires many city-funded projects to achieve a LEED rating.

Prior to joining the City in 1997, he worked in several private firms, including Robert Stern Architects; Ehrenkrantz and Eckstut, Architects; and Croxton Collaborative, Architects.

Craig Kneeland is a senior project manager at the New York State Energy Research and Development Authority (NYSERDA), where he created and manages its Green Building Program. Kneeland helped draft New York State's Green Building Tax Credit legislation, managed the development of the technical components of its draft regulations, and served as chair of the Green Building Tax Credit Advisory Committee. He is a LEED Accredited Professional who has been active in the U.S. Green Building Council since 1994. Kneeland has served on its Board of Directors, State and Local Government and LEED New Construction Core Committees, and the Program Planning Committee of the Upstate New York chapter of the USGBC.