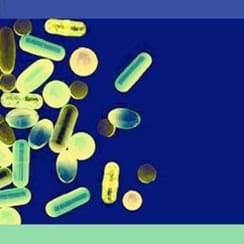 Many cellular signaling pathways are regulated by phosphorylation—the introduction or removal of the phosphate group—through the actions of kinases and phosphatases. With the recent advancement of kinase inhibitors into the clinic, increased drug discovery efforts are being focused on phosphatase inhibition as a therapeutic approach.

The Academy's Biochemical Pharmacology Discussion Group met on April 27, 2004, to review the potential for phosphatases as drug targets. The meeting covered two types of phosphatases and their potential therapeutic indications: dual-specificity phosphatases may offer targets for cancer treatment, and protein tyrosine phosphatase 1B (PTP1B) inhibition, which has a powerful effect on insulin sensitivity in mice, offers hope for diabetics.

Zhang Laboratory
From this eBriefing's fourth presenter, Zhong-Yin Zhang at the Albert Einstein College of Medicine. The site includes additional tools and links related to PTPs.

John S. Lazo, is professor and chairman of the department of pharmacology, University of Pittsburgh School of Medicine, and the co-director of the Experimental Therapeutics Drug Discovery Program, Pittsburgh Cancer Institute. In 1997 he was appointed director of the Fiske Drug Discovery Laboratory. Acclaimed for his work in cancer drug research, Lazo is the recipient of many awards and honors, including an NIH Research Career Development Award. He is currently on the board of directors of the American Association for Cancer Research and the board of publication trustees for the American Society for Pharmacology and Experimental Therapeutics.

Lazo earned his PhD in pharmacology from the University of Michigan. He received postdoctoral training at Yale University, where he later joined the pharmacology faculty. The author of 11 books, he has served as a corporate associate of Johnson & Johnson and chairs the Council for Extramural Grants of the American Cancer Society.

Andrée Olivier is research leader in the department of metabolic diseases at Hoffmann-La Roche. Olivier joined Roche Preclinical Research and Development as a research associate in 1994. She has been involved with the PTP inhibitor project during her whole tenure at Roche, first as a team member and since 1997 as project leader in biology.

Olivier obtained her PhD in biochemistry in 1989 from the Friedrich Miescher Institute of the University of Basel, Switzerland, under the direction of George Thomas. Her research focused on understanding the regulation of ribosomal protein S6 phosphorylation. From 1989 to 1993 she worked as a postdoctoral research fellow with Peter J. Parker at the Imperial Cancer Research Fund in London, studying the role of different PKC enzymes in cellular signaling, then briefly as a visiting scientist at the W. Alton Jones Cell Science Center before joining Hoffmann-La Roche.

His doctoral work at the University of Toronto, under the direction of Ronald Kluger, involved identifying specific factors that affect the hydrolysis rates and reactivity patterns of phosphorus esters and the application of these factors to enzyme-catalyzed phosphate ester hydrolysis and related carbon-carbon bond formation. After obtaining his PhD in 1991, he moved to the laboratory of Stephen Benkovic at the Pennsylvania State University as a Natural Sciences and Engineering Research Council of Canada (NSERC) postdoctoral fellow, working in the area of antibody catalysis. Taylor was awarded a Premiere's Research Excellence Award by the government of Ontario in 2000.

Nicholas K. Tonks is a professor at Cold Spring Harbor Laboratory. The holder of nine patents, he has been recognized by the 1993 Colworth Medal of the British Biochemical Society, awarded annually to the top British biochemist under the age of 35, and, in 2001, election as fellow of the Royal Society, the U.K. National Academy of Sciences. He is the scientific founder of CEPTYR and continues to work with the company as chair of the scientific advisory board and member of the board of directors.

Tonks received his PhD from Dundee University in 1985, working with Philip Cohen. He conducted postdoctoral research with Edmond Fischer, the 1992 Nobel laureate in physiology or medicine, at the University of Washington and was promoted to the research faculty of the department of biochemistry there in 1988. While working with Fischer, Tonks purified and characterized the first member of the protein tyrosine phosphatase family of enzymes, a series of studies that launched the PTP field.

Zhong-Yin Zhang is professor of molecular pharmacology and biochemistry at the Albert Einstein College. His research at Einstein spans the disciplines of chemistry and biology with an emphasis on studies of protein tyrosine phosphatases (PTPs) that serve as key regulatory components in signal transduction. He has employed a multidisciplinary approach to investigate PTP substrate recognition, regulation, and reaction mechanism. Zhang has also established a unique academic drug discovery program to carry out high-throughput screening, combinatory chemistry, and biological testing. He is developing PTP inhibitors that will serve not only as powerful tools to probe signaling mechanisms but also find use for therapeutic development.

Zhang received his PhD in biochemistry from Purdue University in 1990. After a brief stint at the Upjohn Company, he completed his postdoctoral training at the University of Michigan, sponsored by Jack Dixon. Among his awards and honors, Zhang has been named a Sinsheimer Scholar (1997) and an Irma T. Hirschl Career Scientist (1999).