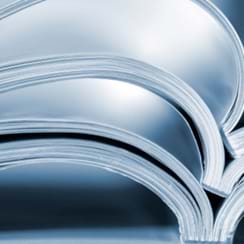 Science Alliance for Students and Postdocs

Striking fear into the hearts of many young scientists is the pressure-cooker adage, "Publish or perish." This is particularly the case concerning publication in the most exclusive journals. To help young scientists make the stellar grade, editors from four prestigious publications discuss what makes a top-tier journal article, how to write cover letters and abstracts, and how to present quality data and figures. They also give advice on how to choose referees, appeal negative decisions, and avoid glaring mistakes. Other topics range from the length of manuscript titles to community review of papers to how the editors themselves made the career shift from academia to publishing.

Science's Next Wave
A wealth of career information for young scientists with how-to articles about publishing in scientific journals, including:

Writing a Publishable Journal Article: A Perspective From the Other Side of the Desk

Academic Scientists at Work: Publishing at the Top of the Heap

The Thrill of the Paper, The Agony of the Review: Part One

The Thrill of the Paper, The Agony of the Review: Part Two

Bench to Page: An Editor's View of Science Publishing

Reviewers Can Help Get Your Paper Published

Brooke Grindlinger completed her PhD in microbiology at the School of Molecular and Microbial Biosciences at the University of Sydney, Australia. As a member of the laboratory that coined the term "proteome," Brooke utilized comparative proteomics to study the pathogenesis of Mycobacterium tuberculosis in the context of vaccine development. After further study in the field of protein chemistry with Norberto Guzman at Johnson & Johnson Pharmaceutical Research and Development in New Jersey, she participated in the development of popular science segments for television for the Australian national primetime program A Current Affair. Brooke joined the Journal of Clinical Investigation as a science editor in August 2002.

Evelyn Jabri completed her PhD with Andrew Karplus at Cornell University, where she determined the crystal structure of urease, a nickel metalloenzyme. As a postdoctoral fellow at the University of Colorado, Boulder in the laboratory of Thomas Cech, she studied hydrolytic mechanisms of catalytic RNA. She then joined the faculty at Indiana University in the Department of Chemistry were she used biochemical and biophysical tools to understand translation regulation during Drosophila germ cell development. Specifically, she examined protein-protein and protein-RNA interactions and their role in translation inhibition. In 2003, she joined the editorial team at Nature Structural & Molecular Biology where as senior editor she helped relaunch the journal with an expanded scope. She joined the ACS Chemical Biology team as the executive editor in November of 2005.

Juan Carlos López was born in Mexico in 1967. He started his scientific career in the mid-'80s at the Universidad Nacional Autónoma de México, looking for neurochemical correlates of memory formation. Juan Carlos obtained his PhD from Columbia University under the supervision of Eric Kandel, and carried out postdoctoral work at the Instituto Cajal in Madrid. He is the author of two scientific books, and before joining Nature Medicine was the editor of Nature Reviews Neuroscience in London.

John Spiro studied biology at Haverford College and then earned a PhD at the University of California at San Diego with the late Walter Heiligenberg. He then did a postdoctoral fellowship at Duke University Medical Center with Richard Mooney. His research interests were in cellular and systems neuroscience, and he was particularly interested in working on preparations where it was possible to forge links between cellular neurobiology and behavior. John joined Nature Publishing Group as an assistant editor at Nature Neuroscience in January 2000. In addition to handling manuscripts—deciding which ones to send out to review, choosing referees and making decisions after receiving reports—he commissioned and edited News and Views, commentaries, book reviews and reviews. John also wrote editorials, book reviews, and press releases. He moved to Nature in January of 2004 as a senior editor on the biology team. At Nature he is responsible for overseeing a small team of editors who are responsible for manuscripts in neuroscience. John regularly visits laboratories and attends scientific meetings in the United States and abroad.

Leslie Knowlton is a freelance writer based in New York City and on Deer Isle, Maine. With a master's degree in psychology, she spent more than a decade as a correspondent for the Los Angeles Times and a medical writer and contributing editor for the Psychiatric Times. Her work has also appeared in dozens of other newspapers and magazines including the Boston Globe, Chicago Tribune, New York Daily News, Cosmopolitan and Fitness.