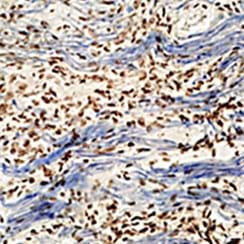 Regenerative Medicine: Transitioning Therapeutics from Cells to the Clinic

The field of regenerative medicine is burgeoning with cell-based therapies that aim to enhance or correct cell function. Preclinical and early-stage clinical trials have demonstrated that these therapies can provide local and systemic benefits by driving the production and secretion of biologically active mediators such as cytokines and growth factors to reverse disease progression and promote healing. Cell-based therapies are commercially available for cartilage and severe burn injuries, and clinical trials have shown promising results in diabetes, kidney disease, heart disease, stroke, cancer, spinal cord injury, neurodegeneration, graft-versus-host disease, and other areas. On February 22, 2016, representatives from academia and industry met at the Academy for a Biochemical Pharmacology Discussion Group symposium titled Regenerative Medicine: Transitioning Therapeutics from Cells to the Clinic. The symposium focused on efforts to make these new therapies routinely available in the clinic—requiring scaled manufacturing and formulation to meet distribution demands and regulatory guidelines, as well as adaptive clinical trial strategies, including novel outcome endpoints.

The New York Academy of Sciences. Regenerative Medicine: Transitioning Therapeutics from Cells to the Clinic. Academy eBriefings. 2016. Available at: www.nyas.org/RegMed-eB

Feigal EG, Tsokas K, Zhang J, et al. Perspective: communications with the Food and Drug Administration on the development pathway for a cell-based therapy: why, what, when, and how? Stem Cells Transl Med. 2012;1(11):825-32.

Jane Lebkowski is chief scientific officer and president of R&D at Asterias Biotherapeutics Inc., where she is responsible for preclinical product development. From 1998 to 2012, she was senior vice president of regenerative medicine and chief scientific officer at Geron Corporation, leading its human embryonic stem cell program. She was previously vice president of research and development at Applied Immune Sciences. Following the acquisition of Applied Immune Sciences by Rhone Poulenc Rorer (RPR, currently Sanofi), Lebkowski remained at RPR as vice president of discovery research. She received her PhD in biochemistry from Princeton University and completed a postdoctoral fellowship in the Department of Genetics at Stanford University. Lebkowski holds 13 U.S. patents and has served as co-chair of the Industrial Committee of the International Society for Stem Cell Research and on several scientific advisory boards and other professional committees.

John F. DiPersio is deputy director of the Alvin J. Siteman Cancer Center, chief of the Division of Oncology, and the Virginia E. and Samuel J. Golman Professor of Medicine at Washington University School of Medicine in St. Louis. His research focuses on fundamental and translational aspects of leukemia and stem cell biology. DiPersio is chair of the ASH Scientific Committee on Hematopoiesis and a member of the Board of Scientific Counselors (Clinical Science and Epidemiology) of the National Cancer Institute. He is the recipient of the Daniel P. Schuster Distinguished Translational Investigator Award from Washington University, the 19th Annual AACR Joseph H. Burchenal Memorial Award for Outstanding Achievement in Clinical Cancer Research, and the American Society of Hematology Mentor Award for Clinical Investigations. DiPersio holds MD and PhD degrees from the University of Rochester and completed an internship and residency at Parkland Memorial Hospital and the University of Texas Southwestern Medical Center. After serving as chief resident at Parkland Memorial Hospital, DiPersio completed a fellowship in the Division of Hematology/Oncology at the University of California, Los Angeles.

Jonathan D. Glass is professor of neurology and pathology and director of the ALS Center in the Department of Neurology at Emory University. He is known for his research on the pathogenesis and prevention of nerve degeneration in neurological diseases, and for his work in human and experimental neuropathology. Glass is the principle investigator for the clinical trial of intraspinal stem cell transplantation for ALS (Neuralstem). He is an active clinician who has been cited each year since 2001 as one of "America's Top Doctors" (Castle Connelly) and since 2005 as one of the few neurologists in "Atlanta's Top Doctors" (Atlanta Magazine). He is also a teacher and mentor to young physicians, and he served as the director of Emory's Neurology Residency Program from 2001 to 2006. Glass received his MD from the University of Vermont and trained in neurology and neuropathology at Johns Hopkins University, where he was a faculty member until moving to Emory in 1996.

Edward Lanphier is the founder of Sangamo BioSciences, where he has served as president, chief executive officer, and a member of the Board of Directors since the company’s inception in 1995. Sangamo BioSciences is a leader in therapeutic genome editing and gene regulation. Lanphier has over 35 years of experience in the pharmaceutical and biotechnology industry, including 25 years in gene therapy and modified-cell therapies. He is chairman of the Alliance for Regenerative Medicine, the principle industry advocacy organization in the area of gene and modified-cell therapy. He is also a member of the Industry Advisory Board for the California Institute for Regenerative Medicine and of the Dean’s Advisory Board at the University of Michigan School of Public Health. He is a director of the Biotechnology Institute and serves on the Board of Trustees of the Buck Institute for Research on Aging.

Racheli Ofir is the vice president of research and intellectual property at Pluristem Ltd. She holds a PhD from the Technion, Israel Institute of Technology, where she investigated telomeric position effects on gene expression and DNA replication in human cells. She completed a postdoctoral fellowship in molecular embryology at the Technion, investigating genes involved in early development of the vertebrate nervous system. She also holds a Master’s degree in law from Haifa University, Isreal. Ofir has a broad experience in the field of human cell therapy, leading the research team at Pluristem in elucidating the therapeutic effects as well as the mechanisms of action, immunogenicity, and in vivo safety of placenta-derived cell therapies. Ofir is a co-inventor on several patents and patent applications in the field.

Mahendra Rao received his MD from Bombay University in India and his PhD in developmental neurobiology from the California Institute of Technology. He is known for his research involving human embryonic stem cells, induced pluripotent stem cells, and other somatic stem cells. Rao has worked in the stem cell field for more than 20 years, with stints in academia, government, regulatory affairs, and industry. He is on the faculty at Wake Forest University and is the vice president of research in regenerative medicine at Q Therapeutics. He serves on the boards of CESCA, XCell, and Q Therapeutics and as a consultant for various stem cell companies, including the New York Stem Cell Foundation. His research focus is neural development and cell-based screening and therapy to treat disorders of the nervous system.

Tom Schulz is the director of embryonic stem cell technology and scale-up at ViaCyte. He holds a PhD in biochemistry and molecular biology from the University of Adelaide, Australia. Before joining ViaCyte he held postdoctoral appointments at Tottori University in Japan, at the U.S. National Institutes of Health, and at the University of Georgia. Schulz is holds several patents related to human embryonic stem cells and cellular therapy. He is a member of the International Society for Stem Cell Research.

John Sinden is chief scientific officer and founder of ReNeuron, where he served as director from 1998 to 2015. Before founding ReNeuron, Sinden was reader in neurobiology of behavior at the Institute of Psychiatry at King’s College London, UK. He holds a PhD in neuroscience from the University of Paris at the College de France and completed postdoctoral appointments at Oxford University and the Institute of Psychiatry before joining its tenured staff in 1987. Sinden is an honorary professor in the Faculty of Medical Sciences at University College London. He is a fellow of the UK’s Royal Society of Medicine and Royal Society of Biology. He is a member of the International Society for Stem Cell Research and of the Expert Working Group on Cell and Gene Therapies for the BioSafe Committee of the Biotechnology Innovation Organization.

Kathy Tsokas leads the Advanced Therapy Global Regulatory Affairs Group at Janssen Research & Development. She is also global regulatory lead for Janssen's Lead Cell Therapy Project. She has 25 years of global regulatory experience in small and large companies, working on products in various therapeutic areas and at all stages of development. Tsokas represents global regulatory affairs on the J&J First in Human Committee, chairs the Alliance for Regenerative Medicine (ARM) Regulatory Committee, and is a member of the ARM Government Affairs and Science and Technology Committees. She speaks frequently at advanced therapy conferences and is a collaborator on planning programs in advanced therapy. Tsokas holds a JD from Widener University Law School and is admitted to the practice of law in Pennsylvania and New Jersey.

Michael Burel is completing a PhD in stem cell biology at New York University School of Medicine. He holds a BS in cellular biology with a certificate in interdisciplinary writing from the University of Georgia. He is the founder and content director of Biocanvas, a contributing writer for Scizzle, and editor of The Sackler Messenger at NYU.

This program was supported in part by an educational grant from Merck and Co., Inc.