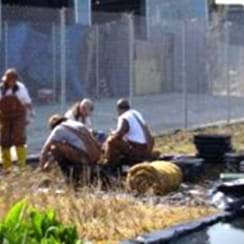 Science from the Street: Co-producing Knowledge from the Ground Level

The May 23, 2006, joint meeting of the Environmental Sciences and Anthropology sections broached the topic of community engagement in scientific studies. Among the findings discussed were three case studies in New York—two in Greenpoint/Williamsburg and one in the South Bronx—that illustrate the benefit of effective communication between local communities and scientific experts in the context of environmental projects. The speakers emphasized the value that local residents and social organizations add to gathering and evaluating data and to ensuring that professional science pays attention to social and cultural issues.

El Puente
El Puente is a local organization in North Brooklyn that organizes and encourages local residents to pursue health, arts, education, and scientific projects within their communities.

The Hunter College Center for Occupational and Environmental Health (COEH)
Founded in 1986, the COEH was one of the first organizations to partner with community groups in Greenpoint/Williamsburg to investigate environmental health hazards. Today, the COEH works with community-based organizations, schools, labor unions, private employers, and federal, municipal, and state agencies to promote better understanding, access to information, and improved skills in addressing workplace and environmental hazards.

National Institute of Environmental Health Science (NIEHS)
The NIEHS is a part of the National Institutes of Health (NIH), and is dedicated to studying the relationship between the environment and human health.

Jason Corburn is an assistant professor in the Urban Planning Program of the Graduate School of Architecture, Planning and Preservation, and the School of International and Public Affairs, at Columbia University. Before joining the faculty of Columbia in 2005, Coburn was a fellow in the Robert Wood Johnson Foundation's Health and Society Scholars program. He is also the former codirector of the Center for Occupational and Environmental Health at Hunter College, City University of New York and was a senior planner with the New York City Department of Environmental Protection.

Coburn's research and practice explores issues of urban environmental health disparities, and how community participation in science and technology policy can address social inequities. His book, Street Science: Community Knowledge and Environmental Health Justice (MIT Press, 2005), explores how local knowledge and professional science can improve research and decision-making to promote more technically sound and socially just urban health policy. Corburn is the recipient of the national Environmental Leadership Program award and a Harvard Law School, dissertation fellowship. He received his BA in politics from Brandeis University, and a Master's degree in city planning and a PhD in urban environmental planning from MIT.

Rob Crauderueff is Project Coordinator for the Green and Cool Roof Demonstration Project, which will provide the basis for Smart Roofs, Inc. He also coordinates brown-field redevelopment projects in the South Bronx.

Crauderueff attended Columbia University as an urban studies major. His senior thesis incorporated research performed for SSB as an intern for Columbia's Earth Institute, and a framework for understanding urban heat island mitigation strategies—especially cool roofs and green roofs—in the New York City context. Additionally, in 2004 Rob performed an ethnography detailing the success of the Ecuadoran "ecological city" of Loja, and then volunteered as a consultant to another Ecuadoran city that strove to become sustainable. He also worked with students and faculty at Columbia to begin a year-long seminar that studied sustainability in an international comparative perspective.

Marta Rodríguez has lived in Hunts Point since the age of 4 and learned about SSB at a celebration that honored South Bronx Environmental Justice Heroes in 2003. She is the mother of two children, Justin and Jaeleen. After that event, and encouraged by the memory of her mother, Toya, a community activist, Marta was inspired to commit herself to becoming active in the community. Marta became part of the Community Council at SSB and volunteered whenever she was needed. Marta was one of the founders of the Green the Ghetto Toxic Tours. Marta became the Community Outreach Coordinator at SSB in 2004; one of her main goals is to help SSB create a better, cleaner and healthier South Bronx.

Laura Buchholz is a science-educated writer and editor who has worked for the Hastings Center, Praxis.md, breastcancer.org, and Rockefeller University Press. In her other persona she writes comedy for the radio shows A Prairie Home Companion with Garrison Keillor and The Next Big Thing. She can be seen every Sunday in Saturday Night Rewritten, a live sketch show at Juvie Hall in New York City.