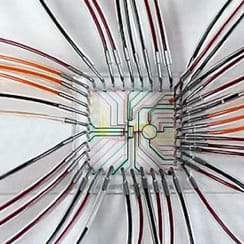 Science In Silico: How Desktop Supercomputing Is Revolutionizing Science

Frontiers of Science and Science Alliance

On February 16, 2007, the Academy's Frontiers of Science and Science Alliance programs collaborated to organize a special symposium for students and postdocs at the University of Miami. Researchers from a wide range of scientific disciplines—including computer science, protein folding, DNA folding, tornado prediction, and systems biology—spoke to students and postdocs about how vastly improved computational power is changing the way science is done.

Ralph Cavin of Semiconductor Research Corporation described new technologies that will enhance computer processing over the next 15 years and beyond. Harold Scheraga of Cornell University spoke about novel approaches to modeling protein folding. Tamar Schlick of the Department of Chemistry and Courant Institute of Mathematical Sciences at New York University discussed her work on dynamics simulations of DNA/chromatin folding. Sai Ravela of the Massachusetts Institute of Technology explained how to model hurricanes using laptop computers. And John Jeremy Rice of IBM described the promises and pitfalls of the systems approach to biology.

SRC (Semiconductor Research Corporation)
An industry-sponsored research consortium that aims to solve technical challenges facing the semiconductor development through support of basic and applied university research and the training of new scientists.

World Wide Protein Data Bank
A central location for the deposition, processing, and distribution of macromolecular structural data that is freely and publicly available to the global community.

Folding@Home
A distributed-computing project that uses personal computers connected via the Internet to simulate the folding of proteins.

7th Community Wide Experiment on the Critical Assessment of Techniques for Protein Structure Prediction
A multidisciplinary competition where research groups try to predict protein structure given an amino acid sequence.

Back to the Future of Systems Biology

Blue Brain
A collaboration between IBM and EPFL to create a biologically accurate, functional model of the brain using IBM's Blue Gene supercomputer.

DREAM Project
This project seeks to explore the ability to reverse engineer biological systems by presenting an opportunity to compare the strengths and weaknesses of algorithms and methods.

Khalili M, Liwo A, Rakowski F, et al. 2005. Molecular dynamics with the united-residue model of polypeptide chains. I. Lagrange equations of motion and tests of numerical stability in the microcanonical mode. J. Phys. Chem. B 109: 13785-13797.

Khalili M, Liwo A, Scheraga HA. 2006. Kinetic studies of folding of the B-domain of staphylococcal protein A with molecular dynamics and a united-residue (UNRES) model of polypeptide chains. J. Mol. Biol. 355: 536-547.

Models for Inference in the Ocean and Atmosphere

Back to the Future of Systems Biology

Cavin is a fellow of the Institute for Electrical and Electronics Engineers (IEEE). He has served as a consultant to a number of government, industrial, and academic institutions and is a member of the Board of Directors of the International Engineering Consortium and the IEEE Computer Advisory Board.

Harold Scheraga is the George W. and Grace L. Todd Professor of Chemistry, Emeritus at the Baker Laboratory of Chemistry and Chemical Biology at Cornell University. His laboratory is investigating the interactions that dictate the folding of a polypeptide chain in water into the three-dimensional structure of a native protein and that determine the reactivity of such a protein molecule (e.g., as an enzyme) with other small and large molecules.

Scheraga has won numerous honors and awards. He was a Guggenheim Fellow and a Fulbright Research Scholar. He is an elected member of the National Academy of Sciences and the American Academy of Arts and Sciences. He is also an honorary life member of the New York Academy of Sciences. Scheraga has won the ACS Mobil Award in Polymer Chemistry, the ACS Repligen Award for Chemistry of Biological Processes, and many others.

Tamar Schlick is professor of chemistry, mathematics, and computer sciences in the Department of Chemistry and the Courant Institute of Mathematical Sciences. She was the director of the new multidepartmental Computational Biology Doctoral Program at the Graduate School of Arts and Sciences and director of program development for the Department of Chemistry at NYU from 2003 to 2006. Schlick was an associate investigator of the Howard Hughes Medical Institute from 1994 to 2003. Schlick has received many honors, including being named 2005 Businesswoman of the Year, an American Physical Society Fellow, and an American Association for the Advancement of Science Fellow.

Tamar Schlick obtained her MS and PhD in applied mathematics at the Courant Institute of Mathematical Sciences at New York University.

Sai Ravela is a research scientist in Computational Earth Science at Massachusetts Institute of Technology. He studied computer vision and robotics at the University of Massachusetts at Amherst and received his PhD in 2002.

His enduring research interest is to design and use methods that can answer queries about the behavior of stochastic spatio-temporal processes. To do so, he studies estimation, control, decision, and information theories. Currently, he focuses on earth systems estimation, specifically to design algorithms that overcome the problems of nonlinearity, dimensionality and uncertainty that is characteristic of earth problems and a real barrier to effective predictability.

John Jeremy Rice is a research staff member of the Functional Genomics and Systems Biology Group at IBM's T. J. Watson Research Center. He is also an adjunct faculty member in the Department of Engineering at the Johns Hopkins University. Rice obtained his PhD from the Department of Biomedical Engineering at Johns Hopkins University. Prior to joining IBM Research, Rice was a computational modeler and research scientist at Physiome Sciences in Princeton, New Jersey.

Catherine Zandonella is a science writer based in New York City, covering such topics as environmental science, public health, and applied technology. She has a master's degree in public health from the University of California, Berkeley. Zandonella has written for a number of publications, including New Scientist, The Scientist, and Nature.