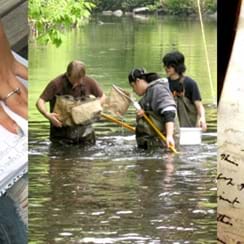 In a recent speech, President Barack Obama claimed that the key to meeting the nation's challenges—from "improving our health and well-being, to harnessing clean energy, to protecting our security, and succeeding in the global economy—will be reaffirming and strengthening America's role as the world's engine of scientific discovery and technological innovation." He went on to say, "Leadership tomorrow depends on how we educate our students today, especially in those fields that hold the promise of producing future innovations and innovators.  And that's why education in math and science is so important."

The reality is that STEM (Science, Technology, Engineering, and Mathematics) education in the United States has fallen behind that of other countries. An assessment by President Obama's Council of Advisors on Science and Technology showed American eighth graders ranking behind their peers in 8 countries in science and 31 countries in math.

So it's no surprise that STEM education is critical in today's schools. But important questions remain. How do you engage students? How do you capture their imaginations and inspire them to participate? Are there examples that can be shared from teachers who have had success in engaging students in these subjects?

On February 23, 2009, the inaugural meeting of the Academy's New York City Science Education Initiative explored ways to inspire students in science and math education. Five outstanding teachers, including 2009 Award Winners from the Fund for the City of New York Sloan Awards for Excellence in Teaching Science and Mathematics as well as a New York City Teaching Fellow, shared their best ideas about engaging middle school and high school students in science and math and provided working examples for educators to bring back to their own classrooms.

The Pamela B. and Thomas C. Jackson Fund

Science as an Everyday Experience

The Value in Wrong Answers: Helping Students Learn the Why, Not Just the What

When the Bronx River is in Your Backyard: Teaching Math and Science through Student Environment

Fernand Brunschwig is a professor of physics and science education at Empire State College SUNY. He earned a PhD from the University of California, Berkeley, in Science Education and three Masters degrees (MS, The City College of New York CUNY, computer science; MA, University of California, Berkeley, physics; and MAT, Harvard Graduate School of Education, science education). His undergraduate degree is in physics from Harvard College.

Dr. Brunschwig is one of Empire State College's founding faculty, hired in 1972, and has made a variety of contributions to the development of the College, including creation of the Student-Alumni Association, the initial Accreditation (for which he co-chaired the Self-Study), and the founding and development of both the ESC-Verizon Corporate/College Program and the Master of Arts in Teaching Program, in which he currently teaches. He is Chair of the NYC Science Education Initiative at the New York Academy of Sciences, which conducts a series of programs for teachers at the Academy's headquarters.

Three years ago, Ms. Dennison aspired to be a college-level professor and researcher after working on type 2 diabetes and cancer drugs at a San Diego biotech company. Her path was altered after reading Random Family: Love, Drugs, Trouble, and Coming of Age in the Bronx, which inspired her to apply for the NYC Fellows Program. Though science was not a subject that came naturally for her, her curiosity pushed her to find ways for ideas and concepts to make sense. She invests time getting to know her students as individual learners and tries to provide learning opportunities that are both applicable and accessible for them. "I have never had a job that requires so much strength, energy and time," she says of teaching, "and yet I have never been more motivated to do great work."

After graduating from North Carolina Central University, Mr. Holmes worked as a researcher before turning his attention—and making significant contributions—to teaching. Using innovative techniques, he empowers students to discover concepts on their own, and creates a sense of intrigue in the classroom that appeals to different learning styles. Students comment that Michael keeps after them "until they get it," and that he loves to illustrate how scientific thinking can be translated to other disciplines. Not surprisingly, one student who said she didn't like chemistry when she entered Mr. Holmes's class is now planning to be a pre-med major.

Mr. Nelson came to Wings Academy six years ago and immediately began imparting his vision: mathematics is a language, and to speak it makes understanding technology and successful careers possible. Famous for detailed, careful preparation, he always aims to help students realize that they can solve problems themselves. These "eureka moments" create confidence, empower students and build student-teacher loyalty—inspiring joy and engagement. Infectious enthusiasm and confidence-building, with careful attention to skill-development, continually affects Mr. Nelson's students. "He has a great way of helping us understand," said one student. "After taking his class, I want to be a math professor."

Despite being told that he couldn't be an educator because he was legally blind, "Mr. P." has been successfully teaching for the last 10 years. Known for creating a safe space where students can ask questions, he also excels at addressing obstacles that prevent learning. Students comment on his creativity in reaching every student, while colleagues note his popular "Bagels and Biology" tutoring program, "Out of 13 years of school, no teacher has done so much for me. I never thought an adult could care so much, and I wanted to perform well because of him," commented a former student.

Coming from a family of teachers, Mr. Vitale gravitated toward hands-on learning and applied mathematics due to a childhood learning disability. An educator at Banana Kelly for 10 years, Mr. Vitale is regarded as a teacher of teachers. He's frequently praised by peers for his ability to strip concepts to fundamental levels, foster creativity and curiosity and transform mathematical study from right and wrong to concepts and logic. Collaborating with Mr. Vitale on a mathematics literacy program for underserved populations, a City College professor noted the rarity of "teachers who combine Nic's knowledge of the subject, knowledge about students and commitment to teaching."

The Pamela B. and Thomas C. Jackson Fund