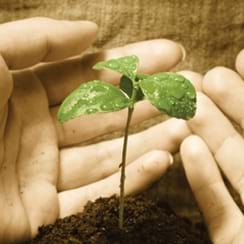 Shortening the Food Chain: Farming in the City

As more people move from rural to urban areas, cities have an ever-greater stake in securing adequate food supplies and in mitigating climate change. Together, all these factors point to a provocative question: Should food be grown on a commercial scale, using sustainable practices, in cities?

On May 27, 2009, three speakers explained the advantages of shifting agricultural practices toward more sustainable, city-based models, and described projects that could serve as models for more widespread strategies. Among projects discussed: a bioregion approach to mitigating climate change that would link NYC consumers and Hudson Valley farmers; sustainable vertical farming, in and on high-rise building; and “building integrated agriculture” that delivers substantial environmental, social, and commercial benefits.

Cornell Cooperative Extension – New York City
If you're growing crops in your backyard in an urban or suburban setting in New York, be sure to ask Cornell to test your soil for lead and other heavy metals.

New York Sun Works
Founded by Ted Caplow in 2004, this nonprofit promotes sustainability by building and testing integrated, ecologically responsible systems for the production of energy, clean water, and food, with a focus on the built environment. The Science Barge is a spin-off.

Urban Climate Change Research Network
This consortium analyzes climate change mitigation and adaptation and energy issues from an urban perspective. It is designed to advance research and promote knowledge-sharing among researchers, urban decision makers, and stakeholders.

U.S. Global Change Research Program
This federal interagency program integrates research on climate and global change. 0n June 16, 2009 it published a comprehensive, plain-English assessment of current and potential impacts of climate change on in different U.S. regions and on aspects of society and the economy such as energy, water, agriculture, and health.

Vertical Gardens
An exhibition staged at New York City art gallery Exit Art in March-June 2009. Dickson Despommier was a speaker at one of the public events.

The Economist. 2009. Whatever happened to the world food crisis? It crept back. (July 2.)

Cynthia Rosenzweig is a senior research scientist at the Goddard Institute for Space Studies, where she leads the Climate Impacts Group; it investigates the interactions of climate variability and change on systems and sectors important to human well being. She co-led the Metropolitan East Coast Regional Assessment of the U.S. National Assessment of the Potential Consequences of Climate Variability and Change, sponsored by the U.S. Global Change Research Program, and was lead scientist on the NYC Department of Environmental Protection Climate Change Task Force. She now co-chairs the New York City Panel on Climate Change.

For the Nobel Prize-winning Intergovernmental Panel on Climate Change, Rosenzweig was a coordinating lead author on the Assessment of Observed Changes and Responses in Natural and Managed Systems in the Fourth Assessment Report.

Recipient of a Guggenheim Fellowship and a fellow of the American Association for the Advancement of Science, Rosenzweig earned a PhD in plant, soil, and environmental sciences from the University of Massachusetts and an MS in soils and crops from Rutgers University. She has published extensively, authoring or coauthoring over 80 peer-reviewed scientific articles and authoring or editing eight books.

At Columbia University, Dickson Despommier is a professor of environmental health sciences in the Mailman School of Public Health and professor of microbiology in the College of Physicians and Surgeons. Trained as a microbiologist, Despommier has always been interested in the environment. His current focus is promoting the concept of vertical farming, so planners and developers around the world will incorporate it into their visions for the future city.

As an infectious disease ecologist with a strong interest in West Nile Virus epidemics in the United States, Despommier studies weather patterns to construct ecologically based models that describe the conditions under which an epidemic might be triggered. He tracks other infectious diseases to determine ecological conditions that favor their transmission.

Despommier is a member of the NYC Department of Health's Food Safety Committee. He earned a MS in medical parasitology from Columbia University and a PhD in biology from the University of Notre Dame. He pursued research into cell biology at Rockefeller University. He has received several teaching awards.

Ted Caplow is senior partner for technical design at BrightFarm Systems, a consultancy that designs hydroponic rooftop farms for commercial, public, and nonprofit clients in the United States and abroad. By training a mechanical and environmental engineer, Caplow has expertise in integrated system design, renewable energy, water contaminant dynamics, and technology assessment. After founding New York Sun Works in 2004, he developed the master plan for the Science Barge, a floating, sustainable urban farm. Its success led to the founding of BrightFarm Systems and Gotham Green.

Formerly a clean energy consultant for Capital-E, LLC, Caplow worked on energy efficiency and carbon-offset credits. Clients included the California Energy Commission and the U.S. Department of Energy. He has lectured on energy-efficient building design at Columbia University. He was a National Science Foundation Graduate Fellow, Columbia University Presidential Fellow, and Princeton University Guggenheim Fellow. He has published numerous scholarly articles. His sustainability work has been featured in many publications.