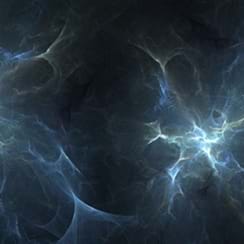 One of the more remarkable features of modern theoretical physics is the ability to link cosmology, the study of the universe at the very largest scales, with particle physics, which looks at the smallest. For example, the origin of protons and neutrons can be traced back to cosmological events that took place when the universe was only a fraction of a second old, while questions about the genesis and fate of spacetime itself take on a new character in the context of string theory.

Many connections of this sort were evident in the diverse talks at the Tenth Northeast String Cosmology Meeting, held at the Academy on December 12, 2007, in conjunction with the Institute for Strings, Cosmology, and Astroparticle Physics (ISCAP) at Columbia University.

Cosmic Variance
A blog focusing on topics in physics, among others, maintained by Sean Carroll and other colleagues. See Carroll's Arrow of Time FAQ.

BooNE (Booster Neutrino Experiment)
General and technical information about the Fermilab project to test for neutrino mass by searching for neutrino oscillations. Links to articles related to miniBooNE, the first phase of the BooNE project, are available here.

Institute for Strings, Cosmology, and Astroparticle Physics (ISCAP)
ISCAP was founded in 2000 at Columbia University founded to bring together theoretical physicists, astrophysicists, and observational astronomers to address key problems in particle physics and cosmology that require a broad confluence of expertise and perspective.

Sean Carroll is a senior research associate in physics at the California Institute of Technology. He received his PhD in 1993 from Harvard University, and has previously worked as a postdoctoral researcher at the Center for Theoretical Physics at MIT and at the Institute for Theoretical Physics at the University of California, Santa Barbara, as well as on the faculty at the University of Chicago. His research ranges over a number of topics in theoretical physics, focusing on cosmology, field theory, particle physics, and gravitation. He is currently studying the nature of dark matter and dark energy, connections between cosmology, quantum gravity, and string theory, and whether the early universe underwent a period of inflationary expansion. Carroll has written a graduate textbook, Spacetime and Geometry: An Introduction to General Relativity, published by Addison-Wesley, and recorded a set of introductory lectures on cosmology for the Teaching Company. He has been awarded fellowships from the Sloan and Packard foundations, as well as the MIT Graduate Student Council Teaching Award and the Villanova University Arts and Sciences Alumni Medallion. Carroll is a contributor to the blog Cosmic Variance.

Peter Hořava is an associate professor of physics at the University of California, Berkeley's Center for Theoretical Physics, and is a member of the theory group at Lawrence Livermore National Laboratory. He is exploring the theoretical structure of string theory, trying to clarify its underlying principles and implications for related areas of physics. Of particular interest are the structure of non-supersymmetric excitations in string theory and the question of how string theory relates to cosmology.

Lisa Randall is professor of physics at Harvard University. Her research concerns elementary particles and fundamental forces, and has involved the study of a wide variety of models, the most recent involving extra dimensions of space. She has also worked on supersymmetry, Standard Model observables, cosmological inflation, baryogenesis, grand unified theories, general relativity, and string theory. Randall earned her PhD from Harvard University and held professorships at MIT and Princeton University before returning to Harvard in 2001. She is a member of the American Academy of Arts and Sciences, a fellow of the American Physical Society, and is a past winner of an Alfred P. Sloan Foundation Research Fellowship, a National Science Foundation Young Investigator Award, a DOE Outstanding Junior Investigator Award, and the Westinghouse Science Talent Search, among many other honors. She is also the author of Warped Passages: Unraveling the Mysteries of the Universe's Hidden Dimensions

Jeff Harvey is a professor in the Physics Department, the Enrico Fermi Institute, and the College of the University of Chicago, as well as a member of the particle theory group. His research focuses on using ideas of string duality to study the structure of QCD, the theory of the strong interactions. He is also interested in other topics in particle physics, cosmology and string theory such as the structure of solitons such as magnetic monopoles, the development of techniques for better understanding M theory, the uses of anomalies in field theory and string theory, and the possibility of a non-commutative structure to spacetime at small distance scales. Harvey earned his PhD at CalTech and spent approximately 10 years in various positions at Princeton University before moving to the University of Chicago in 1990.

Simon Judes is a PhD candidate at Columbia University affiliated with the Institute for Strings, Cosmology, and Astroparticle Physics.