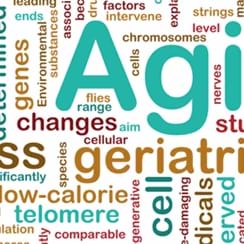 Presented by the Biochemical Pharmacology Discussion Group, the Sackler Institute for Nutrition Science, and the New York Chapter of the American Chemical Society

Over the last century, scientists have provided several hypotheses to explain how and why organisms age. Though at times seemingly unconnected, these hypotheses are beginning to be stitched together by newly uncovered biochemistry, much of which involves a class of enzymes known as sirtuins. Almost 80 years ago researchers Clive McCay and Mary Crowell at Cornell University found that caloric restriction extended the life span of rats. In the mid 1950s, Denham Harman of the University of California, Berkeley advanced the idea that aging was caused by oxygen free radical species within the body. Sirtuins entered the biochemical discussion of aging in 1995 with a publication by Leonard Guarente's group in Cell in which they indicated that SIRT4 extended the lifespan of yeast.

As of this meeting on February 22, 2011, nearly 1200 papers have been published about these enzymes compared with just a handful published by 2000. Organized by Anthony Sauve of Weill Cornell Medical College and Jennifer Henry of the New York Academy of Sciences, this session of the Biochemical Pharmacology Discussion Group brought together several of the leading researchers studying the biology and biochemistry of sirtuins and their role in aging and aging-related diseases such as diabetes, cancer, and neurogenerative disorders. Johan Auwerx of the Ecole Polytechnique Fédérale Lausanne described his laboratory's efforts to understand nicotinamide adenine dinucleotide (NAD+), a cofactor that facilitates protein deacetylation by sirtuins, in metabolism. Leonard Guarente of MIT discussed the involvement of sirtuins in reproduction, cancer, and neurodegenerative diseases. Eric Verdin of the Gladstone Institute at UCSF explored SIRT3's role in fat metabolism. David Sinclair of Harvard Medical School described work with resveratrol and other small molecules to modulate sirtuin activity. Anthony Sauve of Weill Cornell Medical College discussed work to uncover the details of the biochemistry of sirtuins to understand and visualize their function within cells.

Anthony Sauve was born in Los Angeles and grew up in Thousand Oaks California. He achieved a BA in Biochemistry from the University of California at Berkeley and was elected Phi Beta Kappa as a Junior. He attended graduate school at Princeton University and earned a PhD in Chemistry, working in the laboratory of John T. Groves, a world expert on the catalytic mechanism of heteroatom transfer reactions. He was an NIH postdoctoral fellow in the laboratory of Vern L. Schramm, an expert on the uses of isotopes to elucidate catalytic mechanism, and while there began work on the sirtuin enzymes. Sauve described the intricate mechanism of sirtuin deacetylation in 2001, and the mechanism of nicotinamide regulation in 2003. He joined the faculty of Weill Cornell Pharmacology in 2004, and is now Associate Professor of Pharmacology. Sauve's research interests include the enzymology of sirtuins, the development of chemical tools to study sirtuins in cells and the elucidation of enzyme mechanisms and pathways for NAD biosynthesis in microbial and mammalian cells.

Johan Auwerx received his MD in 1982 and his PhD in Molecular Endocrinology in 1989 at the Katholieke Universiteit in Leuven, Belgium. He is a certified clinical specialist in Endocrinology, Metabolism and Nutrition and is currently professor at the Ecole Polytechnique Fédérale in Lausanne, Switzerland, where he heads a research group together with Schoonjans. Johan Auwerx is internationally known as an expert in metabolic diseases, molecular biology, and mouse molecular genetics. Auwerx spearheaded a unique large mouse phenogenomics program and was the director of the Strasbourg Mouse Clinical Institute from 2006 to 2008. He was elected as a member of EMBO in 2003 and received a dozen of scientific prizes, including the prestigious Minkowski award (1998), the Morgagni Gold Medal (2004), the International Danone Nutrition Award (2009), and the Wiendaus prize (2010). In addition, he serves on the editorial board of prestigious scientific journals and as scientific advisor to several biopharmaceutical companies.

Leonard Guarente is the Novartis Professor and Director of the Paul F. Glenn Lab for the Science of Aging at MIT. He discovered that a group of related proteins termed sirtuins slow aging in model organisms and mitigate aging and diseases in mammals. Critically, he showed that sirtuins are NAD-dependent protein deacetylases. This finding links protein acetylation, metabolism, and aging. It also indicates that sirtuins mediate the benefit of calorie restriction on health and longevity. More recently, the Guarente lab has shown that genetic activation of the mammalian sirtuin SIRT1 mitigates major diseases, such as Alzheimer's Disease, in appropriate murine models.

Professor David Sinclair is a Professor at Harvard Medical School in the Departments of Pathology and Genetics, co-Director of the Paul F. Glenn Laboratories for the Biological Mechanisms of Aging, and a Senior Scholar of the Ellison Medical Foundation. At MIT he worked with Lenny Guarente and codiscovered a cause of aging for yeast and the role of Sir2 in epigenetic changes driven by genome instability. In 1999, he moved to Harvard Medical School where his lab works primarily on understanding the role of sirtuins in disease and aging, with a particular interest in chromatin, energy metabolism, mitochondria, learning and memory, neurodegeneration, and cancer. He has also contributed to the understanding of how sirtuins are modulated by endogenous molecules such as nicotinamide and NAD+, and pharmacological agents such as resveratrol. He has co-founded two companies that develop medicines for diseases of aging (Sirtris) and vaccines for infectious diseases (Genocea). Sinclair is co-chief editor of the journal Aging and has received awards including The Australian Commonwealth Prize, a Helen Hay Whitney Postdoctoral Award, a Leukemia Society Fellowship, a Ludwig Scholarship, a Harvard–Armenise Fellowship, an American Association for Aging Research Fellowship, The Nathan Shock Award from NIH, Scholarships from The Ellison Medical Foundation, The Merck Prize, the Genzyme Outstanding Achievement in Biomedical Science Award, a "Bio-Innovator award", the David Murdock-Dole Lectureship, the Fisher Honorary Lectureship at UCLA.

Eric Verdin received his MD degree from the University of Liege, Liege, Belgium. He trained as a diabetologist/endocrinologist and has held positions at the Joslin Diabetes Center and Harvard Medical School, the University of Brussels, the NIH, and the Picower Institute for Medical Research. He joined the Gladstone Institute of Virology and Immunology in 1997 and became its Associate Director in 2004. He is also Professor of Medicine, University of California, San Francisco. Verdin is a fellow of the American Association for the Advancement of Science, and member of the American Society of Microbiology, the American Society for Biochemistry and Molecular Biology, the American Society for Clinical Investigation and the American Association of Physicians. He has served as reviewer on study sections for the National Institute of Health, as the organizer of international meetings and as the editor of several books and reviews. He has published more than 140 international papers and is associated with 10 published patents. Verdin's laboratory studies the role of reversible protein acetylation in aging and focuses on a family of protein deacetylases, called sirtuins, and their role in aging.

Before hanging up her labcoat, Sarah Webb earned a PhD in bioorganic chemistry from Indiana University in Bloomington. Based in Brooklyn, NY, she writes about science, health, and technology for many publications including Scientific American, Discover, Science Careers, Science News, Nature Biotechnology, and ACS Chemical Biology.