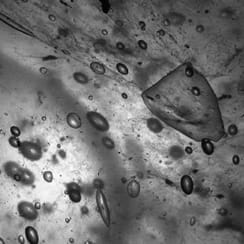 When powerful new technologies are introduced, progress is almost invariably coupled with new risks. Nanotechnology has the potential to confer incredible benefits for human health and the environment. This emerging area of research holds the promise of transforming medicines, advancing computer technologies, and enhancing consumer products. Nanomaterials—a relatively new class of materials defined by their tiny size and ability to be manipulated at the atomic level—may also introduce a variety of risks to the environment and to human health. Government agencies and industrial researchers alike are working to consider such implications while minimally hampering their scientific potential.

Carefully assessing both the applications and implications of nanotechnology is the responsibility of scientists and government agencies aimed at informing and protecting the public. An open dialog about the benefits and risks of this technology may serve to mitigate a possible public backlash. On September 18, 2006, the Environmental Sciences Section of the New York Academy of Sciences gathered to discuss the applications of nanotechnology and the implications these would have on the environment.

National Nanotechnology Initiative
The NNI is a federal research and development program that sets priorities and coordinates multiagency efforts in nanoscale science, engineering, and technology.

Nanotechnology: Small Science, Big Deal
This Web site, based on an exhibition held at the Science Museum in London, offers general information about nanotechnology and examples of the ways in which it is being used today.

Project on Emerging Nanotechnologies
Led by David Rejewski, this partnership between the Woodrow Wilson Center for Scholars and the Pew Charitable Trusts works to reduce possible risks that nanotechnology poses, to maintain public and consumer understanding of and engagement with nanotechnologies, and to ensure that the potential benefits of these new technologies are realized. The Project has recently published Michael R. Taylor's report, Regulating the Products of Nanotechnology: Does FDA Have the Tools It Needs?

U.S. EPA Draft Nanotechnology White Paper
The draft white paper on nanotechnology is the product of a December 2004 workgroup within the EPA's Science Policy Council workgroup to identify and describe the issues EPA must address to ensure protection of human health and the environment.

Woodrow Wilson International Center for Scholars
Visit the Wilson Center's page on the Project on Emerging Nanotechnologies for video of nanotech-related events, and other news.

Rebecca Cool is chief of the New Chemicals Notice Management Branch in the Chemical Control Division of the Office of Pollution Prevention and Toxics (OPPT) at the U.S. Environmental Protection Agency. This branch is responsible for reviewing new chemical premanufacture notifications, including notifications for new chemical nanoscale materials, and coordinating scientific input into decisionmaking at the EPA. Prior to coming to OPPT in 1997, Cool held a variety of positions in the EPA's Office of Pesticide Programs, including chief of the Emergency Response and Minor Use Section.

Barbara Karn has led the EPA's research grants program for nanotechnologies in the agency's Office of Research and Development since the program's establishment in 2001, and represented the EPA on the interagency Nanoscale Science, Engineering, and Technology subcommittee (NSET) of the White House Office of Science and Technology Policy, National Science and Technology Council. She also recently completed an appointment at the Woodrow Wilson International Center for Scholars. Her professional background ranges from electroplating to polymers, from environmental consulting to small business owner, and from academic administrator to water quality management planner. Karn is the lead editor of the book, Nanotechnology and the Environment: Applications and Implications, published by Oxford University Press in June 2005.

David Rejeski directs the Project on Emerging Nanotechnologies at the Woodrow Wilson International Center for Scholars in Washington, DC, a project supported by the Pew Charitable Trusts. He was a visiting fellow at Yale University's School of Forestry and Environmental Studies and an agency representative (from EPA) to the White House Council on Environmental Quality (CEQ). Before moving to CEQ, he worked at the White House Office of Science and Technology (OSTP) on a variety of technology and R&D issues, including the development and implementation of the National Environmental Technology Initiative. His most recent book, coauthored with Bob Olson, is Environmentalism and the Technologies of Tomorrow: Shaping the Next Industrial Revolution, published by Island Press in 2004.

Lee Paddock is director of environmental law programs at Pace Law School. Before joining Pace he worked in the Minnesota Attorney General's Office from 1978–1999, serving under Hubert H. Humphrey, III. He was also senior environmental counsel to the National Association of Attorneys General from 1985-1986. When a new attorney general was elected, Lee became an environmental consultant working as a visiting scholar with the Environmental Law Institute, as a senior consultant to the National Academy of Public Administration, and of counsel to the Minnesota Center for Environmental Advocacy. Paddock has also taught as an adjunct professor at the University of Minnesota and the William Mitchell College of Law.

Kiryn Haslinger is a science writer and editor with a masters in theoretical chemistry. Since working with James D. Watson on his book DNA: The Secret of Life as a research and editorial assistant, she has written freelance articles on science and scientific history.