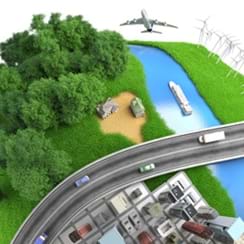 The New York Metropolitan Area is expected to experience significant growth in the next couple of decades: an additional million people will call New York City their home by 2035. Further afield, in Upstate New York, the reverse is true: population size will decline, but these populations will still require the provision of services. Policy-makers are faced with complex task of optimizing investments and the location of public infrastructure development, including advances in transportation services, as they rely on a smaller tax base. The panel on Smart Growth Around Transportation Hubs, held at the New York Academy of Sciences on June 7, 2011, explored the concept of "Smart Growth" and its principles' capacity to guide decision-making by providing a framework for prioritizing ultimate planning goals as well as for parsing the challenges of project selection.

David King of Columbia University provided an overview of 'smart growth'—in particular its applicability to the transportation sector and to emission reduction goals. King revealed some surprising and welcome trends in the growth of the American city. Urban sprawl cannot be blamed entirely on the advent of the era of the automobile because American cities have been becoming less dense since the early 1900s, before the dramatic rise in automobile use. Fortunately, according to King's data, U.S. travelers are demonstrating automobile fatigue that cannot be accounted for by the state of the economy or by the price of oil. Another positive trend is the repopulation of downtown cores as people move from the suburbs back into city centers.

Furthermore, in spite of sprawl, commute times in the U.S. are some of the lowest in the world. This reflects the fact that people living in the outskirts of the city probably do not work in the central business district, suggesting that where people work is a more important factor than where they live to consider in transportation planning.

Gerry Bogacz from the New York Metropolitan Transportation Council gave a talk centered on regional transportation planning for the New York City metropolitan region. The region faces the prospect of significant growth in population and employment over the next two decades. Although important to the region's economic vitality, this growth, if realized, will present real mobility challenges, given current levels of transportation congestion throughout the region.

In response to these challenges, the members of the New York Metropolitan Transportation Council, a regional council of governments that includes New York City, New York State, the Metropolitan Transportation Authority and the Port Authority, and suburban counties on Long Island and in the lower Hudson Valley, has adopted a long-range Shared Vision for a more sustainable pattern of growth through the identification of areas ideal for growth, related strategic transportation improvements, and maintenance of the existing infrastructure.

Peter Fleischer, Executive Director of Empire State Future, expanded the discussion state-wide, demonstrating that smart growth principles are also applicable to regions that might be considered low-density. Fleischer described areas upstate that are experiencing increased sprawl without a significant increase in the population, also known as "sprawl without growth" (SWOG). The result of SWOG is that government has to absorb the cost of maintaining old infrastructure as well as of developing new infrastructure without the increased revenue that often comes with population growth. Furthermore, there are areas that exhibit levels of urban blight and decay similar to Brooklyn and the Bronx in the late 1970s and early 1980s. Another problem that is particular to the upstate region is that, relative to the NYMTC area, upstate counties experience significant gaps in transportation equity: Those who cannot drive are significantly under served by public transportation, which has broader implications for their quality of life. While the population of New York City is set to increase, 42 of the 49 counties will see their populations decline in the next 20 years. This demographic shift has implications on the state tax base revenues and on the location of infrastructure development.

David King is an Assistant Professor of Urban Planning. His research explores transportation planning and finance, social equity, land use regulations, and the political economy of policy innovation. As part of this research he has written about the phenomenon of cruising for parking, has used spatial regression techniques to analyze travel behavior, and has explored the co-development of transit systems and land development. He also studies how public policy influences the adoption of new technologies to address congestion, energy, and environmental concerns. These issues are the focus of Professor King's teaching through his courses covering planning techniques and methods, transportation and land use planning, and transport policy. King holds a PhD in Urban Planning from UCLA and a Masters of Urban and Regional Planning from the Humphrey School of Public Affairs. He joined the faculty of the Graduate School of Architecture, Planning and Preservation at Columbia University in 2008.

Gerry Bogacz has been the Planning Director for the New York Metropolitan Transportation Council (NYMTC) since 1997. NYMTC is a regional council of governments which is the metropolitan planning organization for New York City, Long Island, and the lower Hudson Valley. NYMTC is responsible for planning for the use of Federal transportation funding in its planning area. Prior to his work at NYMTC, Bogacz spent ten years as the Director of Planning for the Westchester County Department of Transportation. He holds a Master's degree in Urban Planning from NYU and a Master's degree in Public Affairs from Fordham University.

Peter Fleischer is the first Executive Director of the statewide, 44-member Empire State Future coalition. He started in this role in February 2008. Empire State Future seeks the economic revitalization of New York's main streets, town centers, and urban areas by advancing the principles of smart growth in land use and development decision-making. Fleischer holds an BA from Harvard and an MBA from the Yale School of Management. From 2003–2007, he was the Senior Vice President at the Empire State Development Corporation's Governors Island subsidiary. Before this Fleischer was a Transportation and Environmental policy advisor to the New York City Mayor's Office. He also served as Assistant Commissioner for Policy at the NYC Department of Transportation. Prior to his government service, Fleischer worked in strategic planning and private banking at Shearson Lehman American Express. A long-time resident of Manhattan's West Village, he now lives in downtown Albany.