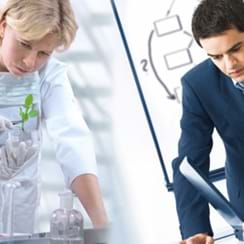 Start Me Up: Building a Business from Academic Research

Science Alliance for Students and Postdocs

Bioentrepreneurs, a venture capitalist, and a university technology licensing officer spoke to a gathering of University of California graduate students and postdocs about the rewards and challenges of moving from academia to founding a biotech company. Speakers told stories from their own experiences, described the personal traits that can be valuable at a startup, and offered advice for the young researcher looking to translate a discovery into a company. Talks also focused on issues related to technology transfer and attracting venture capital.

Alternative Careers via MIT
The MIT careers office has created this page of links and suggested reading for scientists considering alternative careers.

Careers Beyond the Academy
UC Berkeley page for scientists looking to change direction.

Myers-Briggs Personality Test
Background information on this test for identifying your personality type.

PhDs.org
These links to science, math, and engineering career resources—from specifics of employers to the "big picture"—are sorted by user rating.

Science Careers
Published by the American Association for the Advancement of Science and Science magazine, this site has "recruit" in its URL for good reason. Look to Science Next Wave for additional news.

The Scientist Careers
Features an online job search, as well as articles for job seekers and employers, employer profiles, and diversity listings.

Feibelman PJ. 1994. A Ph.D. Is Not Enough: A Guide to Survival in Science. Perseus Books, New York.

Peter Fiske is a scientist, entrepreneur, and author who has lectured and written extensively on career development for scientists and engineers. He is the vice president for business development for RAPT Industries, Inc., a technology company he cofounded in 2001. Prior to starting RAPT, Fiske led a research group in the Physics and Advanced Technologies Directorate of Lawrence Livermore National Laboratory. Fiske received his PhD in geochemistry and materials science from Stanford University where he was a National Science Foundation Fellowship recipient from 1988 to 1991.

Fiske has written and lectured on science policy and career development for scientists since 1993. He is the author of To Boldly Go: A Practical Career Guide for Scientists and Put Your Science to Work as well as nearly 50 articles, most for the online career Web site ScienceCareers.org. He has given his workshop "Put Your Career to Work" to over 7000 early-career scientists and engineers in more than 50 leading research institutions in the United States.

Corey Goodman has served as president and CEO and a director of Renovis, Inc., since September 2001. He cofounded Renovis in 2000, and previously cofounded Exelixis in 1994. Goodman was a professor at Stanford for eight years and then at the University of California, Berkeley for 18 years. Today, he is an adjunct professor of neurobiology at UC Berkeley. At Berkeley, Goodman was the Evan Rauch Professor of Neuroscience, director and cofounder of the Wills Neuroscience Institute, and an investigator with the Howard Hughes Medical Institute. Goodman was elected a member of the National Academy of Sciences, the American Academy of Arts and Sciences, and the American Philosophical Society. Goodman was chair of the National Research Council's Board of Life Sciences, and is vice president of the McKnight Endowment Fund for Neuroscience and a member of the BayBio board and the Biotechnology Industry Organization's ECS board. Goodman received a BS in biology from Stanford University and a PhD in neurobiology from UC Berkeley.

Avi Spier was educated in biological sciences at Oxford University, and obtained his PhD in molecular neuroscience from Cambridge University, UK, at the MRC-Laboratory of Molecular Biology. Spier trained as a postdoc at the Scripps Research Institute (TSRI) where he worked on the neuropharmacology of two novel neuropeptides: cortistatin and hypocretin. Following the identification of a promising family of neuroprotective neuropeptides, in 2001 Spier cofounded Allon Therapeutics, Inc., in La Jolla, to develop these peptides into therapeutic products for treating neurodegenerative conditions including Alzheimer's disease, Parkinson's disease, and stroke. Following two rounds of financing, in September 2004, the company joined the Toronto Stock Exchange with two products entering clinical trials. In November 2004, Spier joined the Genomics Institute of the Novartis Research Foundation as director of business development, where he is responsible for developing commercial opportunities and alliances stemming from the Institute's leading position in genomics, proteomics, and research technologies.

Irwin Mettler has a distinguished career with a research science background and business experience in licensing and patenting biotechnology. He completed undergraduate and graduate studies at the University of California, Davis in plant science and plant physiology, received a PhD from UC Riverside in plant physiology, and conducted postdoctoral research studies at UC Santa Cruz. He then began his career as an industrial research scientist at Stauffer Chemical Company, Sandoz Agro, and Northurgup King Seed Company, working on the development of transformation methods for genetic engineering of insect and disease resistant crops. His work resulted in the development of patented, genetically engineered, Bt-corn materials that are major products in the U.S. and world markets today. After working as a consultant on a series of patent litigations regarding such Bt-corn products, he served as a manager for technology acquisition and director of biotechnology for Seminis Vegetable Seeds. Currently, he is a senior licensing officer for UC Berkeley's Office of Technology Licensing, where he evaluates patent disclosures, negotiates licenses, and manages patent prosecutions in the general area of biotechnology for the UC Berkeley campus.

Karl Handelsman joined CMEA Ventures in February 1999. Handelsman has been involved with numerous CMEA investments such as Ambrx, Ensemble Discovery, Ilypsa, Kalysys, Maxygen, Phenomix, Rigel, Syrrx, and Xenoport. Prior to joining CMEA, Handelsman was one of the first employees of Tularik, Inc., a drug discovery company, where his business development role spanned corporate partnering, technology licensing, and operations. Handelsman was also one of the first employees of the Whitehead Institute, a premier research organization within Massachusetts Institute of Technology, and he worked in business development at Millennium Pharmaceuticals. He holds graduate degrees from both MIT and Harvard Medical School.

Michael D. O'Neill is a science writer based in San Francisco, California. He holds a master's degree in immunology from Duke University and has written for Wired News, The Scientist, and Genetic Engineering News, among other publications.