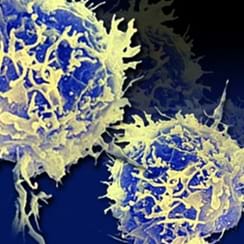 Th1 or Th17 Cells: What are the Pathogenic T cells in CNS Autoimmunity?

For years, immunologists thought that Th1 cells were primarily responsible for autoimmune conditions such as multiple sclerosis and inflammatory bowel disease. But when mouse geneticists knocked out the gene encoding interferon-γ, which is required for Th1 cell development, they discovered that mice lacking Th1 cells could still develop autoimmune disease. Subsequent work uncovered a previously unknown helper T cell lineage, dubbed Th17 cells, which researchers now hypothesize may be responsible for autoimmunity.

A March 22, 2007, meeting of the Academy's Neuroimmunology Discussion Group addressed the resulting question: Is autoimmunity caused by Th1 cells or Th17 cells? Researchers looked at the role of various cytokine signaling pathways—including TGF-β, IL-6, IL-23, interferon-γ, and IL-17—in defining the fates of T cells, and how pushing the cells to one T-cell type or another affected the appearance of disease in mouse models. Speakers also discussed evidence that the nuclear hormone receptor RORγt may sit at the base of both the Th17 and Treg pathways, serving as the decision point between inflammation and suppression.

Crohn's Disease
This Web site, by the National Digestive Diseases Information Clearinghouse, details the symptoms of the disease, treatment, and current research.

Multiple Sclerosis: National Institute of Neurological Disorders and Stroke
This Web site contains information about the disease, current clinical trials, and links to other organizations for people with multiple sclerosis.

Regulation of Th1 and Th17 Cells

Vijay Kuchroo is a professor of neurology at Harvard and an associate immunologist at the Brigham and Women's Hospital in Boston. Born in Kashmir, India, Vijay Kuchroo initially trained as a veterinarian before pursuing basic research. After receiving a PhD in pathology from the University of Queensland, Australia in 1985, he came to the U.S. National Institutes of Health as a Fogarty International Fellow, then joined the faculty at Harvard Medical School.

An author on more than 100 original research papers and numerous review articles, Kuchroo also sits on several editorial and grant-review boards. He has also received numerous honors, including the Fred Z. Eager Research Prize for his work at the University of Queensland, and the Javits Neuroscience Award from the National Institutes of Health in 2002. Kuchroo's current work focuses on the genetics and molecular biology of autoimmune diseases, especially type 1 diabetes and multiple sclerosis.

Daniel Cua has been with DNAX Research Institute, a division of Schering-Plough Research Institute, since 2000. As senior principal scientist of discovery research, his responsibilities include in vivo target validation of novel cytokines for regulating immune-mediated inflammatory disorders. His research papers have appeared in journals such as Cell, Immunity, Nature Immunology, Annual Review of Immunology, Journal of Experimental Medicine, and Journal of Clinical Investigation. In 2003, his work appearing in the journal Nature provided definitive proof that IL-23 is a critical cytokine that promotes autoimmune inflammatory disorders. This seminal finding led to the development of the IL-23/Th17 immune axis hypothesis. His team has filed several invention disclosures and he is principal inventor or co-inventor for five patent applications.

Cua completed his doctorate in 1997 with the Department of Molecular and Cellular Immunology at University of Southern California School of Medicine.

Though still at an early stage of her career, Harrington has already established an impressive record in her field, including 15 research publications and a score of presentations and abstracts at international meetings. She has also received several awards, including an AAI-Huang Foundation Trainee Achievement Award in 2005, and appointment as a FOCIS Trainee Satellite Symposium representative in 2006. Her work focuses on the regulation of T cell maturation and the development of autoimmunity, especially in Crohn's disease and inflammatory bowel disease.

Littman's research interests are in the areas of T lymphocyte development, lymphoid organogenesis, and HIV pathogenesis. He has applied mouse genetic approaches towards gaining insights into each of these areas. His contributions have led to new therapeutic approaches for AIDS and autoimmune diseases. Littman is a Fellow of the American Academy of Arts and Sciences and is a Member of the National Academy of Sciences. He was awarded the 2004 New York City Mayor's Award for Excellence in Science and Technology.