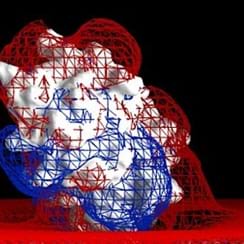 The Big Impact of Small Differences

The central mantra of basic biology is that form dictates function. Flippers are for swimming, wings for flying. Structure, in turn, is guided by genes through their protein workforce.

Small differences writ large were the theme of the night as three structural chemists discussed their work at a gathering at the New York Academy of Sciences Chemical Biology Discussion Group on February 7, 2005. Although they work on entirely different molecular systems, the researchers arrived at the same bottom line: It doesn't take much change in a molecule's structure to make an outsized difference in its function. The chemical biology symposium was sponsored in part by Wyeth. Topics discussed included how small differences in cadherin composition cause big changes in function, maximizing the binding efficiencies of synthetic α-helices to their target proteins, and efforts to create a drug that would target the estrogen β receptor.

Cadherins
An excellent breakdown of cadherins is provided by the University of Toronto.

Barry Honig is professor of biochemistry and molecular biophysics at Columbia University and an investigator for the Howard Hughes Medical Institute. He uses computational approaches, based on biophysics and bioinformatics, to study the structure and function of biological macromolecules. His laboratory currently focuses on a number of areas related to protein structure, function, and genetics.

Honig received his MS in chemistry from the Johns Hopkins University and his PhD in chemical physics from the Weizmann Institute of Science in 1968. He served postdoctoral fellowships at Harvard and Columbia universities, and previously was on the faculty at Hebrew University and the University of Illinois at Urbana-Champlain. Among Honig's honors and awards are the 2002 Founder's Award from the Biophysical Society and a 1995 Merit Award from the National Institutes of Health. He is member of the National Academy of Sciences and a fellow and former president of the Biophysical Society.

Paramjit Arora is assistant professor in New York University's department of chemistry. He is interested in bioorganic chemistry and molecular recognition, with a focus on the design and synthesis of molecules that allow control over protein-protein and protein-nucleic acid interactions. In 2002, Arora was one of 10 New York State researchers to receive the first annual James D. Watson Investigator Award and research grant.

Arora received his PhD in organic chemistry from the University of California at Irvine in 1999. Before coming to NYU in 2002, he conducted postdoctoral research at the California Institute of Technology with a fellowship from the American Cancer Society.

Eric Manas obtained his PhD in theoretical chemical physics from the Temple University department of chemistry in 1998, studying the effects of energy and charge transfer on the electronic structure and optical properties of molecular aggregates. He also did several years of experimental work on synthesis and characterization of high-T c superconductors.

Manas went on to do postdoctoral research at the University of Pennsylvania School of Medicine, in the department of biochemistry and biophysics. This research combined Poisson-Boltzmann electrostatics, quantum mechanics, and spectroscopic methods to study how spectra can be used to probe the environments of solvated proteins and their prosthetic groups. Manas joined Wyeth Research in October 1999 as a computational chemist, where his work has involved various aspects of molecular modeling and structural biology in the women's health & bone and neuroscience research areas. Research topics of particular interest include the incorporation of solvation effects and internal coordinate entropy in protein-ligand binding energy calculations and virtual screening, as well as the application of quantum chemical methods to understand protein-ligand interactions.

Adam Marcus is a science writer based in New York City. His work has appeared in a variety of publications, including Science, New Scientist, the New York Daily News, the Christian Science Monitor, and others. He lives in Washington Heights with his wife and two daughters.