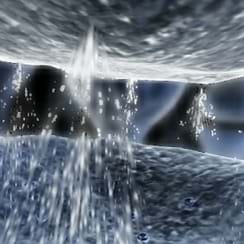 The Ions Have It: Targeting the Ion Channels for Drug Discovery

Ion channels, the highly selective transmembrane proteins fundamental to cellular electrogenesis and a vast number of signaling functions, constitute promising grounds for targeted therapeutics to treat a host of disorders. At a symposium at the Academy on September 26, 2006, researchers discussed efforts to develop such therapeutics.

Terry Snutch discussed an N-type calcium channel that may be an excellent target for therapeutics to control chronic pain and the prospects of designing a pharmacophore that can generate drug candidates with genuine selectivity.

Alan D. Wickenden covered the history of the vanilloid receptor, its operation, and a potential candidate antagonist.

Mark Bowlby discussed the sodium channels as targets for drugs to treat chronic pain and provided a glimpse of the way the new high- and medium-throughput assays can be employed to develop novel compounds with improved selectivity.

John Wemmie described current research around the acid-sensing ion channels (ASICs), the role they might play in fear and anxiety, and the prospect of developing an improved drug for treating related psychiatric disorders.

Ion Channel, Patch Clamp, and Electrophysiology Portal
This Web site contains links to recent high impact publications about ion channels, job listings for ion channel researchers, links to tutorials about the subject, and many other resources.

Targeting Calcium Channels for the Treatment of Pain

John Dunlop is director of neuropharmacology and neurophysiology in the Neuroscience Discovery Research Division of Wyeth Research. He joined the UK division of Wyeth Research in 1992 and relocated to the Princeton, NJ, facility in 1995. Dunlop oversees a multidisciplinary technology group interfacing with the psychiatric and neurological disease therapeutic areas within neuroscience. Specifically, his group leverages enabling technologies such as electrophysiology, high-throughput pharmacology, and high content cell-based imaging in support of neuroscience programs.

Dunlop completed his undergraduate studies in biochemistry at the University of Glasgow and obtained a PhD in neurochemistry from the University of St. Andrews, both in Scotland, UK. Upon completion of his PhD studies, Dunlop joined Wyeth Research UK. Dunlop is a member of the Society for Neuroscience, the American Society of Pharmacology and Experimental Therapeutics, and the Society for Biomolecular Sciences, at which he sits on the education committee.

Terrance Snutch is a professor in the Michael Smith Laboratories at the University of British Columbia, Vancouver. Snutch specializes in the molecular and functional characterization of the family of voltage-gated calcium channels. In 1998 Snutch founded a biopharmaceutical company, NeuroMed Pharmaceuticals, Inc. He has been a Howard Hughes Medical Institute International Research Scholar, a Medical Research Council of Canada Scientist, a Canadian Institutes for Health Research Senior Investigator, and is presently a Canada Research Chair. Some of his other accolades include the Alfred P. Sloan Research Foundation Fellowship in Neuroscience, the Killam Research Prize, and the International Albrecht Fleckenstein Award from Bayer AG for his groundbreaking research in calcium channel biology. In 2000 Snutch received the Steacie Prize, awarded to Canada's top young scientist or engineer. In 2001 Snutch was inducted as a Fellow of the Royal Society of Canada, the highest achievement for a Canadian scientist.

Snutch earned his PhD from Simon Fraser University and carried out postdoctoral work at the California Institute of Technology under the guidance of Norman Davidson and Henry Lester.

Alan Wickenden has almost 20 years of experience in the field of ion channels and drug discovery. He received his PhD from the University of Birmingham, UK, and postdoctoral training in the laboratory of Peter Backx at the University of Toronto. Wickenden has held positions of increasing responsibility in drug discovery at Zeneca Pharmaceuticals, Icagen Inc., and Johnson & Johnson PRD. He is currently a research fellow in the Pain and Related Disorders team at Johnson & Johnson in San Diego, CA.

Mark Bowlby is a research scientist in the Discovery Neuroscience department at Wyeth Research, in Princeton, NJ. The department seeks to discover and develop novel pharmacological agents for the treatment of neurological, psychiatric, and chronic pain diseases. Bowlby's group specializes in ion channels as therapeutic targets, and they use electrophysiology, fluorescence, and brain slice assays to discover and optimize compounds targeting ion channels. His specific research interests include mechanisms of neuronal hyperexcitability, degeneration and plasticity, and pharmacology and structure-function relationships of ion channels.

Bowlby obtained his BS from the State University of New York at Stony Brook and his PhD from the University of California, Santa Barbara. He subsequently completed two postdoctoral fellowships, the first at Harvard Medical School, where he studied steroid hormone modulation of glutamate currents, and the second at Brandeis University with Irwin Levitan, studying modulation of cloned potassium channels.

John Wemmie is an assistant professor in the Psychiatry Department at the University of Iowa and has held that position since 2002. Prior to that he completed his MD, PhD, and psychiatry residency at the University of Iowa. He completed a postdoctoral fellowship with Michael Welsh, where he began his studies on acid-sensing ion channels (ASICs) in brain function. This work is beginning to reveal an important role for ASICs in animal models of anxiety. Wemmie is a board-certified psychiatrist and treats patients with PTSD and other anxiety disorders at the VA hospital.

John Galbraith Simmons is a nonfiction author, novelist, and journalist who writes about the history of science and medicine for popular and professional audiences. He is the author of The Scientific 100, which profiles one hundred of the most influential scientists in history, and Doctors and Discoveries: Lives that Created Today's Medicine.