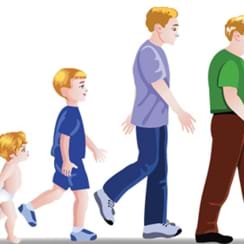 The Systems Biology of Aging and Neurodegenerative Diseases

The symposium The Systems Biology of Aging and Neurodegenerative Diseases held at The New York Academy of Sciences on March 7, 2011, brought together researchers actively involved in the development and application of systems biology methodologies to examine aging and related diseases, covering the link between heart disease and diabetes, the genetic basis of normal mammalian aging using a mouse model system and the development and application of new technologies, particularly whole-genome sequencing. The ultimate aim of the systems approach is to increase our understanding of these complex biological networks, in both experiment and theory.

The first speaker, Domenico Accili of Columbia University described his use of a systems biology approach to understand the link between heart disease and diabetes. Heart disease is the leading cause of death in diabetic patients, accounting for 40% of all diabetes-related deaths. A major player in the development of heart disease, atherosclerosis, can be targeted to three main sites: the liver, which produces atherogenic lipoproteins; the vasculature in which atherosclerotic plaques form; and the adipocytes, which contribute to lipid turnover and inflammation.

Interestingly in the liver of people with type 2 diabetes, insulin no longer suppresses glucose production, yet it continues to stimulate the production of atherogenic lipoproteins. This observation implies that treatment of type 2 diabetes with insulin can have the unwanted effect of worsening the progression of atherosclerosis.

Thus, Accili's group was interested in determining how the differential response to insulin in the liver arises. The team identified the transcription factor FoxO1 as a key link between insulin regulation of glucose and lipid metabolism. They used genetic manipulation of FoxO in mice to determine the role of the protein in the synthesis of bile acids, triglycerides, glucose, and cholesterol. By observing these indicators of metabolism in the transgenic mice Accili's team found that the mice modeled the metabolic features of humans with type 2 diabetes. This result allowed the group to employ RNA and metabolite profiling in the mice to identify the mechanism whereby FoxO1 controls susceptibility to atherosclerosis in diabetes. With their findings they hope to provide a new therapeutic approach to prevention and treatment of the disease in diabetics.

David Burke of the Institute of Gerontology at the University of Michigan discussed the use of the laboratory mouse in the genetic study of complex systems biology and aging. He explained that because genome-wide association studies in humans identify a large number of candidate loci each of which has a very small effect on the phenotype of interest, such approaches are not likely to be effective for the study of age-dependent, high-variance phenotypes and diseases. As an alternative Burke's group devised a strategy in which mice are cross-bred to generate a reproducible, mixed-genotype population that can be used in genome scans for effector loci for a large number of phenotypes. This approach has a number of benefits including that the loci identified have a larger effect on phenotype than typically seen in human populations, that the researchers are able to replicate experiments, and that the mouse populations can be used to identify genes that influence the rate of change over time.

David Galas of the Institute for Systems Biology discussed how the field of human genetics is enjoying a transformative era, as whole genome sequencing and new computational approaches give scientists the ability to examine the relationship between genotype and phenotype in much greater detail than ever before.

Demonstrating the power of these new tools, Galas described a whole genome sequencing approach he and his colleagues recently took to identify candidate genes for two disorders whose genetic underpinnings were unknown. The team identified a family in which both children were affected by the two disorders but their parents were unaffected. By sequencing the entire genome of each family member the group identified four candidate genes for the diseases and ultimately they narrowed that down to one gene per disease.

In general, with the family sequencing approach, the researchers are able to generate a full recombination map of a genome with a median resolution of 2500 base pairs. The approach also makes it relatively easy to detect when sequencing errors and de novo mutations occur. Follow-on studies with more complex disorders in this field continue.

Andrea Califano is professor of biomedical informatics at Columbia University, where he leads several cross-campus activities in computational and system biology. Califano is also codirector of the Center for Computational Biology and Bioinformatics, director of the Center for the Multiscale Analysis of Genetic Networks, and associate director for bioinformatics at the Irving Cancer Research Center.

Califano completed his doctoral thesis in physics at the University of Florence and studied the behavior of high-dimensional dynamical systems. From 1986 to 1990, he was on the research staff in the Exploratory Computer Vision Group at the IBM Thomas J. Watson Research Center, where he worked on several algorithms for machine learning, including the interpretation of two- and three-dimensional visual scenes. In 1997 he became the program director of the IBM Computational Biology Center, and in 2000 he cofounded First Genetic Trust, Inc., to pursue translational genomics research and infrastructure related activities in the context of large-scale patient studies with a genetic components.

Aris N. Economides joined Regeneron Pharmaceuticals Inc in 1992 and he currently holds the position of Sr. Director, leading two groups: Genome Engineering Technologies, and Skeletal Diseases TFA. Economides is a co-inventor of the Cytokine Trap technology that led to the development of the IL-1 trap, a currently approved biologic drug (ARCALYST™). He is also a co-inventor of the VelociGene® technology, which has led to the development of VelocImmune®, a method for the generation of all-human antibodies in mice. More recently, he has been spearheading the development of new methods for the generation of transgenic mice using BAC as transgene vectors, and has also pioneered a new method for generating conditional alleles.

Stolovitzky received his PhD in mechanical engineering from Yale University and worked at The Rockefeller University and at the NEC Research Institute before coming to IBM. He has served as Joliot Invited Professor at Laboratoire de Mecanique de Fluides in Paris and as visiting scholar at the physics department of The Chinese University of Hong Kong. Stolovitzky is a member of the steering committee at the Systems Biology Discussion Group of the New York Academy of Sciences.

Accili's research has delved into the pathogenesis of diabetes, the integrated physiology of insulin action and mechanisms of pancreatic beta dysfunction. He has served on several editorial boards, including the Journal of Clinical Investigation and Diabetes. He is a member of many advisory panels for academia, government and industry, and he is an elected member of the Association of American Physicians and the American Society for Clinical Investigation.

David Galas is Professor and Senior Vice President at the Institute for Systems Biology where he conducts his research and leads multi-investigator projects. Formerly he was Chief Science Officer for Life Sciences of the Battelle Memorial Institute. He was previously Chancellor, Chief Scientific Officer and Norris Professor of Applied Life Science at the Keck Graduate Institute of Applied Life Sciences (KGI), in Claremont, CA, a research and educational institution in the applied life sciences, which he co-founded. Galas has also served as Director for Health and Environmental Research at the U.S. Department of Energy's Office of Science, where he headed the DOE's Human Genome Project from 1990 to 1993.

Galas's PhD training was in physics at the University of California. He has also held research positions at the University of Geneva, Switzerland, and the University of California's Lawrence Livermore National Laboratory. He has served on many federal, university and corporate boards, including several biotechnology companies he has co-founded, and on various advisory and National Research Council committees, including the Board on Life Science, and the National Cancer Policy Board. He chairs the Board of Directors of the Fannie and John Hertz Foundation. He is a lifetime National Associate of the National Academy of Sciences.