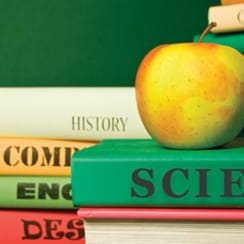 Thinking About Teaching: Myths and Realities of Becoming an Educator

On February 24, 2011 the New York Academy of Sciences hosted young scientists and mathematicians for a panel discussion titled Thinking about Teaching: Myths and Realities of Becoming an Educator. The panel included Hilleary Osheroff, Program Manager for the Science Research Mentoring Program at the American Museum of Natural History, Ellen Cohn, biology teacher at Bronx Science, Heather Cook, Assistant Professor in the Department of Biological Sciences at Wagner College, Nicole Gillespie, Associate Director of Teaching Fellowships at the Knowles Science Teaching Foundation, and Gabriel Rosenberg, master teacher in the Math for America Program at Bard College Early High School. The panel was introduced by Monica Kerr, Director of the Science Alliance and moderated by Meghan Groome, Director of K-12 Education Initiatives at the Academy.

The purpose of the panel was two-fold: to demonstrate a variety of teaching-focused jobs and to share the insight of people who have transitioned into these careers from a research background. Panelists gave their impressions of what it is like to hold these positions after doing research. The panel included a faculty member at a small, teaching-focused, liberal arts college, two high school teachers, an educator who both teaches and coordinates research for students at a museum, and the director of a program that recruits and supports math and science teachers.

Regardless of the speakers' job titles, one idea was universally confirmed in their comments: teaching is a dynamic and difficult profession that does not mirror the teaching experience of most PhDs, namely as a teaching assistant. The panelists were candid about their initial naïvetè about the difference between being a content expert and being able to teach a subject to students. All of them identified a steep learning curve that leveled off after two to three years.

In order to survive this initial "awkward phase," new teachers need, as the panelists noted based on their own experience, key support resources that focus on helping teachers find a professional learning community that includes other teachers in the same general content area as well as master teachers who can help solve problems, offer teaching resources, and simply provide moral support on a bad day. For the panelists, balancing those bad days were the positive attributes of teaching, including building relationships with the students, watching them succeed, the designing creative lesson plans, and being a professional learner.

During the Q & A audience members were curious about the balance between research and teaching in the panelists’ education positions, but most of the panel members responded that they have not been engaged in research at a high level since they moved from academia to teaching. Some panelists, however, did articulate the efforts they have made to incorporate research into their current work. Cook spoke about finding the right project for a given set of resources, working with undergrads, and her current scientific interests. Rosenberg discussed choosing to do research during the summer and taking on additional paid teaching responsibilities. Cohn, who coordinates two classes of students doing research, admitted that she missed doing research herself but that she was happy to live vicariously though her students.

The panelists also offered advice to the audience:

Meghan Groome is the Director of K12 Science Education Initiatives which includes the STEM Afterschool Mentoring Program, NYC Science Teacher Initiative, and the Academy's education web portal.  Groome joined the Academy in July of 2010 after spending almost three years as a consultant to the American Museum of Natural History.  Prior to her work at AMNH, Groome was a Senior Policy Analyst with the National Governors Association and worked on Governor Janet Napolitano's Innovation America initiative and co-authored Building a STEM Agenda, a framework for state's and large organizations to improve their science education pipelines from birth through graduate school.

Groome completed her PhD at Teachers College Columbia University in Science Education with a focus on urban science education and reform and conducted field research with Ann Rivet and Angela Calabrese-Barton at middle schools across NYC. During graduate school, Groome co-founded uPublic, an education consulting company focused on local, national, and international education reforms including large-scale policy reforms in developing countries and school design.  In addition, Groome was an Education Policy Fellow for the Institute for Educational Leadership. Groome graduated from The Colorado College in 2000 with a major in biology and theater and is a certified science teacher with experience teaching PreK through Graduate school. She has taught chemistry, physics, and biology.

Monica Kerr earned her PhD in cell and developmental biology from the Biological and Biomedical Sciences Program at Harvard Medical School. She studied signal transduction in the cancer biology laboratory of National Academy of Sciences member Lewis Cantley. During this time, she identified a new protein in the PI 3-kinase pathway and studied its role in Drosophila development.

Following graduation, Kerr left the bench to focus on science education as an instructor and curriculum fellow in the Biological Chemistry and Molecular Pharmacology Department at Harvard Medical School. She taught and developed science-based curricula for undergraduate, graduate, and medical school science courses as well as career advancement initiatives for science PhDs. Throughout her tenure at Harvard, Monica founded a new professional development series for life scientists, received two teaching awards, and was selected to participate in the Harvard Macy Institute’s Program for Educators in Health Professions.

Monica joined the New York Academy of Sciences in February 2010 as the director of Science Alliance, an international career development program for graduate students and postdocs.

Ellen Cohn is in her second year as a teacher in NYC. She is a high school biology teacher at the Bronx High School of Science and currently teaches 9th grade biology and 10th grade Science Research projects. She received her PhD from Weill Cornell Medical College in immunology and also studied breast cancer in a post-doctoral fellowship. She is part of the New York City Teaching Fellows, a program to allow career changers to enter the teaching profession and bring their experiences to NYC students. At the end of this school year, she will have completed her Master's degree in education.

Heather Cook received a BS in Biology from Trenton State College (now called the College of New Jersey) in Hillside, NJ. She earned a PhD in molecular microbiology from the Tufts University Sackler School of Biomedical Research in Boston. She did postdoctoral research with Bill Theurkauf in the Program of Molecular Medicine at the University of Massachusetts School of Medicine where she started studying early development in the fruit fly Drosophila melanogaster. Cook is currently an assistant professor in the Department of Biological Sciences at Wagner College on Staten Island. Her teaching responsibilities include an introductory biology course for the biology major, a writing intensive freshman seminar course, and intermediate and upper level molecular cell biology courses. Her research is currently focused on analyzing the effects of endocrine disrupting chemicals on Drosophila development.

Nicole Gillespie directs the KSTF Teaching Fellowships program which includes Teaching Fellows in the fields of biology, physical science and mathematics education nationwide. Gillespie received a BS in mechanical engineering with a minor in Russian from the United States Naval Academy in Annapolis, MD in 1990 and served five years as an active duty naval officer after graduation. She earned an MS in physics from the University of Washington in 1999 and a PhD in science education from the University of California at Berkeley in 2004. Nicole taught science and mathematics at Menachem Mendel Seattle Cheder High School in Washington and worked with the Seattle Public Schools to introduce inquiry-based science curriculum in elementary grades. While at the University of California, she worked on a study of students' intuitive understanding of force, the results of which were published in Cognitive Science. From 2000 to 2003 she was a science teacher with the Upward Bound Program at Napa Valley College and in the summer of 2004 she worked as a mentor to science teachers in the Summerbridge program at San Francisco's University High School.

Hilleary Osheroff received her PhD in developmental neurobiology from the Rockefeller University in 2008. After leaving the lab, she came to the American Museum of Natural History to manage the NSF-funded Science Research Mentoring Program, a two-year research internship program for high school students. She teaches informal science education courses on genetics and biomedical research.

Gabriel Rosenberg received his BA in mathematics from Rice University and his PhD in mathematics from Columbia University. After a three year postdoctoral instructorship at Yale University he joined the faculty of Bard High School Early College (BHSEC) in 2004 and has been teaching there since. BHSEC is a joint venture between Bard College and the New York City Department of Education which seeks to bring a rigorous college education into the high school classroom. For the past four years he also been a master teacher in the Math for America program, an organization which seeks to recruit, train, and retain outstanding mathematics teachers.