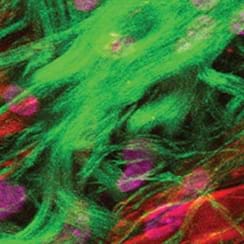 The year-end meeting of the Chemical Biology Discussion Group, held June 1, 2009, highlighted the diverse spokes of chemical biology around a central theme: biomolecular recognition. In his keynote talk, Adrian Whitty described an effort to find small molecules that disrupt protein–protein interactions. Shorter student and postdoc talks covered attempts to diversify the palette of small molecules available for drug discovery, new biomolecular switches, a new antibiotic target, chemical analogs for studying DNA damage, sorting cellular proteins, and a synthetic motor built from and fueled by strands of DNA. While very different in scope, all linked back to the central issue: harnessing the chemistry of biology for new applications.

Please use the tabs above to find a meeting report and multimedia from this event.

Adrian Whitty is associate professor in the Department of Chemistry, Boston University, where he has worked since 2008. He spent the previous 14 years at Biogen Idec, most recently as director of Physical Biochemistry leading a group responsible for the structural, biophysical, and mechanistic study of drug targets and of protein and small molecule drug candidates. Adrian obtained a BSc in chemistry at King's College, University of London and a PhD in organic chemistry at the University of Illinois at Chicago, after which he did postdoctoral work with Biogen (now Biogen Idec) in 1993.

Whitty's research has included elucidation of enzyme mechanisms and enzyme-inhibitor interactions, as well as mechanistic investigations of integrins, immune cell co-stimulatory molecules, and a number of cytokine and growth factor receptors. The unifying theme of his work has been to understand how binding energy is generated through protein–protein or protein-small molecule interactions and how it is used to achieve biological function and specificity. A major focus of his current research is exploration of how the interactions between receptor components in the two-dimensional environment of the cell membrane govern the ability of cells to sense and respond to their extracellular environment. A second area of focus is the development of small molecule inhibitors that block protein–protein interactions.

Renato Bauer is a graduate student in the Tri-Institutional Training Program in Chemical Biology (TPCB) at Cornell University. A native of Pepperell, Massachusetts, Bauer received his BS in biochemistry with honors from Stonehill College in 2005. He is currently conducting his doctoral work in the laboratory of Derek Tan at Memorial Sloan–Kettering Cancer Institute in the areas of reaction discovery and method development for the purposes of diversity-oriented synthesis.

Angelo Guainazzi completed his undergraduate and master's studies at the Swiss Federal Institute of Technology (ETH) in Zurich in 2003. His master's thesis was completed in Donald Hilvert's lab, where he worked on enzyme engineering. In 2004 Guainazzi joined Orlando Schärer's group at the University of Zurich and moved with the whole group to Stony Brook University one year later, where he has worked on DNA damage and repair as a PhD student ever since.

Tosan Omabegho is a doctoral candidate in the School of Engineering and Applied Science at Harvard University. In 2005 he moved to New York City to work with Nadrian Seeman at NYU as a visiting scholar. In the Seeman lab, Tosan completed his doctoral research on a synthetic molecular motor constructed from DNA. He graduated in the spring of 2009.

Scott Lefurgy is a postdoctoral fellow at the Albert Einstein College of Medicine in the laboratory of Tom Leyh. He received his PhD from Columbia University, where he studied protein function using in vivo screening and selection methods in the laboratory of Virginia Cornish. Scott holds Bachelor of Science (biochemistry) and Music (voice performance) degrees from the University of Michigan. An accomplished classical singer, he made his Carnegie Hall debut in 2003 and been reviewed by the international magazine Opera.

Mark Blenner is a 5th year graduate student in the Department of Chemical Engineering at Columbia University. He works in the Protein and Metabolic Engineering Laboratory headed by Scott Banta. Blenner defended his dissertation, "Design of Stimulus Responsive Peptide and Engineering Biomolecular Recognition into Stimulus Responsive Proteins" at the end of July. He began a postdoctoral fellowship at the Immune Disease Institute working with Timothy Springer this September.

Guillaume Charron received his MSc in chemistry from Université de Montréal where he studied the structure-activity relationships of conformationally constrained drugs under the guidance of Stephen Hanessian. Charron is now pursuing a PhD in biological sciences at the Rockefeller University in the Hang Laboratory of Chemical Biology and Microbial Pathogenesis.

Before hanging up her labcoat, Sarah Webb earned a PhD in bioorganic chemistry from Indiana University. Based in Brooklyn, NY, she writes about science, health, and technology for many publications including Scientific American, Discover, Nature Reports Stem Cells, and ACS Chemical Biology.