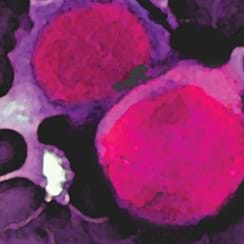 Trouble at the Checkpoint: DNA Damage and Cancer Treatment

Before allowing a cell to proceed to the next phase of the cell cycle, checkpoints ensure that everything that was supposed to happen in the previous phase happened without error. Cell cycle checkpoint failure is a major feature of tumor growth, causing cells to divide when they shouldn't. On March 13, 2008, researchers met at the Academy to ponder this phenomenon, and talk about new therapeutic strategies that try to restore checkpoint control when it goes awry.

Among their findings are that tumor cells commonly mutate their checkpoint genes, allowing them to reproduce even with damaged DNA and other defects, and that treating cancer by activating the DNA damage response/checkpoint pathways in tumor cells appears to be a viable strategy for chemotherapy. Several new drugs in development could help circumvent tumor cells' resistance to current treatments.

Peter Sicinski is a professor of pathology at Harvard Medical School and the Dana Farber Cancer Institute. Sicinski received his MD and PhD from the Warsaw Medical School in Poland. He spent two years as a visiting scientist at the Medical Research Council in Cambridge, England, before becoming a postdoctoral fellow with Robert A. Weinberg at Massachusetts Institute of Technology. In 1997, Sicinski joined the faculty of Harvard and Dana Farber Cancer Institute, where his research focuses on genes in the cell cycle machinery involved in normal cell development and cancer.

Sicinski has received several awards for his work, including an Abbott Bioresearch Center Award, an AACR–Gertrude B. Elion Cancer Research Award, and was named a Scholar of the Leukemia and Lymphoma Society.

David Glover is chief scientist at Cyclacel. Glover discovered and named the Aurora, Polo, and other mitotic kinases, enzymes that play key roles in the regulation of cell division. He is the Arthur Balfour Professor of Genetics and chair of the Department of Genetics at the University of Cambridge and director of the Cancer Research UK Cell Cycle Genetics Research Group. He has authored over 200 publications and patents.

Rachael Hawtin is associate director of biology at Sunesis Pharmaceuticals, Inc., a clinical-stage biopharmaceutical company located in South San Francisco, California, focused on the development of small molecule therapeutics for cancer therapy. Rachael obtained her undergraduate degree at the University of Edinburgh, Scotland, and postgraduate degree in molecular biology at the Institute for Virology and Environmental Microbiology in Oxford, England. Her drug development experience encompasses seven years at Sugen, Inc., followed by two years at Chiron Pharmaceuticals (now Novartis), where she focused primarily on the development of small molecule kinase inhibitors for cancer therapy.

Rachael moved to Sunesis Pharmaceuticals, Inc., in August, 2006, where she has been involved in the establishment of translational science research to support Sunesis' drug development pipeline. Her work has focused in particular on the clinical stage compounds SNS-032 and SNS-595.

René H. Medema is head of the Laboratory of Experimental Oncology, part of the Genomics Center Utrecht. Medema obtained his PhD from the University of Utrecht in 1993. Following his PhD he joined the laboratory of Robert A. Weinberg at the Whitehead Institute for Biomedical Research. In July 1995, he was appointed as assistant professor in the group of G. Rijksen at the Department of Hematology, headed by J. J. Sixma and A. Hagenbeek. In 2001, his group moved to the Netherlands Cancer Institute, headed by A. Berns. In 2005, he became professor of Experimental Oncology in the Department of Medical Oncology, at the University of Utrecht.

Medema's work has focused on transcriptional regulation of the cell cycle, the function of cell cycle checkpoints, and spindle assembly.

Chiang Li is chairman, CEO, and CSO of Boston Biomedical in Norwood, MA. Prior to founding that company, Li was the CSO & EVP of ArQule Inc., where his management responsibility included drug discovery, preclinical development, clinical trials, pharmaceutical development, and intellectual property. He currently serves as the chairman of ArQule's Scientific Advisory Board, and is a founder and a board director of Cequent Pharmaceuticals, Inc.