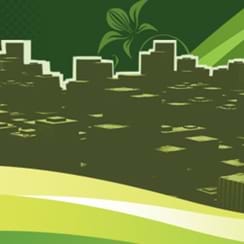 U.S. energy consumption in buildings outpaces usage in transportation and by industry. Reducing energy consumption by buildings, or replacing it with non-emitting, renewably generated energy, has therefore been identified as a critical step in managing climate change. "Zero net energy buildings" are one proposed approach to the problem. The strategy entails pushing the tradeoffs between energy efficiency and renewable energy generation to the level of individual buildings, where it can be evaluated during design, construction, and operation. Since some energy use cannot be eliminated, these designs use local generation, often by photovoltaics, to bring the net energy usage to zero.

To help build consensus on how to evaluate and promote low- and zero-energy construction, the Academy's Green Buildings Discussion Group presented a four-part series on zero net energy building, including case studies, a review of global efforts, and a discussion of the role financial incentives and valuations.

Use the tabs above to find a meeting report and multimedia on these events.

Thank you to our sponsor for their support of this series.

Architecture 2030
Sponsor of the 2030 Challenge, an initiative to encourage the global architecture community to reduce greenhouse gas emissions of the Building Sector through better design of buildings and communities.

BREEAM
BREEAM, the Building Research Establishment Environmental Assessment Method, is the U.K. standard that is similar to LEED in the United States.

DOE Office of Energy Efficiency and Renewable Energy
See this page at the U.S. Department of Energy for information about how zero energy buildings are defined, along with other resources. They also host a database of low-impact buildings.

The Merton Rule
Web site for the Merton rule, a requirement that new buildings get at least 10% of their energy from renewable sources, which has been universally adopted in the United Kingdom.

The ZEROprize
This Web site describes the $1 million Z-prize for demonstrating new concepts in building re-skinning.

Paul A. Torcellini is section supervisor for commercial buildings research at the National Renewable Energy Laboratory, a U.S. Department of Energy National Laboratory. He has a Master's and PhD in mechanical engineering from Purdue University. Paul is on the adjunct faculty at Colorado School of Mines.

Paul Schwer is president of PAE Consulting Engineers in Portland, Oregon. PAE is a mechanical/electrical design firm that specializes in integrated sustainable design for buildings. He holds a BS in Mechanical Engineering from Bucknell University, and is a registered Professional Engineer in four states. Over the last 20 years, Paul has designed mechanical systems for a number of public and private buildings both nationally and internationally.

Schwer spent two years as an adjunct faculty member of New York University and is currently an adjunct faculty member of the University Of Oregon Department Of Architecture. He is a LEED Accredited Professional currently working on over two dozen projects pursuing USGBC LEED certification. Several of these projects are pursuing LEED Platinum ratings. Paul is also actively involved with The Natural Step (TNS).

Clark Brockman is director of SERA Architects' sustainability resource team. He is the chair of the Cascadia Region Green Building Council board of directors and serves on the Oregon Natural Step's advisory board. He has served in a green building advisory capacity to Portland's Office of Sustainable Development and Sustainable Development Commission, City Commissioner Dan Saltzman, the Portland Development Commission, Multnomah County, Clackamas County, the Oregon Business Council, the Governor of Oregon, and Oregon Congressman David Wu's office. He is also a frequent lecturer and panel participant on sustainable design, green building policy change, and the impact of the built environment on climate change.

Brockman completed a Bachelor of Environmental Design at the University of Colorado, and is a registered architect in Colorado and Washington.

Roger Frechette is the director in charge of Building Services and Sustainable Engineering for the design firm of Skidmore, Owings & Merrill LLP. He is a registered professional and mechanical engineer with over 20 years of experience. Frechette is currently leading the engineering team for Burj Dubai, which is planned as the world's tallest building and man-made structure, as well as the "low-energy," high-performance concept Pearl River Tower under construction in Guangzhou, China. His work also includes a diverse group of projects, ranging from laboratories, airports, hospitals, academic buildings and corporate offices to government buildings and museums.

In 2002, Frechette coauthored a document known as the Nantucket Principals, which focuses on the trends and issues that will influence green building and sustainable design in the future. In 2004, Frechette received United States Congressional recognition for his work in building sustainability.

Luke McKneally is a registered architect at Solar Design Associates, Inc. with 15 years of diverse design experience. A U.S. Green Building Council LEED accredited design professional, he specializes in energy-efficient, environmentally responsive design and the use of renewable energy in buildings. He is involved in all aspects of the firm's practice including client relations, architectural programming, design and production, project management and LEED certification.

During his first decade of practice, Luke became increasingly involved in sustainability and environmental issues and took a sabbatical to expand his knowledge of living systems. He earned his MS in biology from Harvard, performing his graduate research at the Organismic and Evolutionary Biology Laboratories while also providing weekly presentations at Boston's Museum of Science to broaden public understanding and appreciation of science.

Edward Brzezowski is a nationally recognized professional mechanical engineer with 30 years of experience. He is currently the director of engineering for the Ferreira Group and president and founder of Noveda Technologies in Branchburg, NJ, where he engineered the first Net Zero Electric Commercial Building in the United States. He is the lead commissioning authority engineer on the new World Trade Center Transportation Hub project in New York City.

Brzezowski is a graduate of the New Jersey Institute of Technology and holds professional engineering licenses in New York and New Jersey. He is also a LEED® accredited professional, a New Jersey Department of Energy technical analyst, and a member of the American Society for Heating, Refrigerating and Air Conditioning Engineers (ASHRAE) and Building Commissioning Association (BCxA).

Report from the World Business Council for Sustainable Development

William Sisson is presently the director of sustainability and since 2006 the co-chair for United Technologies Corporation in the World Business Council for Sustainable Development Energy Efficiency in Buildings Project. Since 1985, he has worked for UTC in a variety of technical and business leadership positions. Most recently, he was director of Carrier R&D Programs, at UTC's central corporate research center, where he was responsible for Carrier's longer range innovation portfolio, with emphasis on energy and environment.

Sisson is an MIT Sloan Fellow since 1999, where he developed a thesis entitled "Fueling Innovation and Growth Strategies using Corporate Venturing". He completed his undergraduate studies at Virginia Tech in Engineering Science and Mechanics, received his MS in Mechanical Engineering from Rensselaer Polytechnic Institute and was awarded an MBA from the Sloan School at Massachusetts Institute of Technology.

Guy Battle is an environmental consulting engineer. He is passionate the design and delivery of sustainable solutions within the built environment and is one of the founding partners of consulting engineers BattleMcCarthy.  More recently Battle founded a new carbon management group, dcarbon8 which specializes in the delivery of low carbon solutions for business and buildings.

Battle has worked with many of the world's most renowned architects including Fosters, Richard Rogers, and Frank Gehry. Battle has worked on a number of buildings within the U.S. including the Freedom Tower with SOM, Hudson Yards Masterplan (Cooper Roberston), and the Federal Courthouse, Los Angeles.

Battle is a member of the World Economic Forum where he is part of the Sustainable Buildings Group and has contributed to a number of publications including Sustainable eco-Systems and The Endless City. He also lectures widely having been a visiting professor at IIT, Chicago and a master speaker at the USGBC Annual conference on two occasions.

Scott Muldavin is executive director of the Green Building Finance Consortium, a group he formed in 2006 to enable an assessment of sustainable property investment from a fiduciary/financial perspective. The Consortium is supported by the real estate industry independent of green building product or trade groups. Trade group members and collaborators include the Mortgage Bankers Association, BOMA International, the Pension Real Estate Association, the Urban Land Institute, the National Association of Realtors, the Appraisal Institute, the Royal Institute of Chartered Surveyors, and CoreNet Global. Muldavin has been an advisor for over 25 years to many of the nation's leading real estate companies including CalPERS, UBS, RREEF, and Bank of America. Muldavin has led the Muldavin Company for 10 years, been a lead real estate partner at Deloitte & Touché, co-founded the $4+ billion Guggenheim Real Estate investment fund, and served on the Advisory Board of Global Real Analytics, an advisor on nearly $2 billion of REIT and CMBS funds. Muldavin is a counselor of real estate, a fellow of the Royal Institute of Chartered Surveyors, and author of over 200 articles on real estate finance, investment, valuation, and sustainability.

Ron Dembo is the founder & CEO of Zerofootprint. Recently nominated for a "Crunchie Award" as most likely to change the world and named "Toronto's Best Green Organization" by blogTO, Zerofootprint's goal is to mobilize and empower large groups of individuals and organizations worldwide to reduce their collective carbon and ecological footprint. Targeting businesses, cities, communities, and schools, Zerofootprint's software helps clients measure and manage their environmental impact and can be accessed easily through the web. Prior to that, Dembo was the founder, CEO, and president of Algorithmics Incorporated. He had a distinguished 10 year academic career at Yale University, authored 3 books, published over 60 technical papers on finance and mathematical optimization, and holds a number of patents in computational finance. A sought-after speaker, he was one of the few individuals to present at the David Suzuki's Foundation Conference last year.

Thank you to our sponsor for their support of this series.