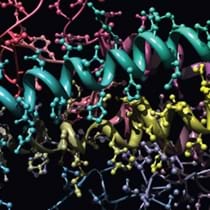 The New York Academy of Sciences' Physical Sciences and Engineering Program, in conjunction with Polytechnic Institute of New York University and The City College of New York/CUNY, will host a day-long symposium focusing on protein design, a subject that lies at the interface of chemistry, biology, engineering and computer science.

The 3rd Advances in Biomolecular Engineering Symposium will highlight the recent advances in proteins, specifically focusing on innovative approaches to tailor proteins with unique functions and architectures. This symposium is highly interdisciplinary and will bring together recognized scientists and engineers who are performing cutting-edge research with core knowledge in physical sciences and engineering. An important goal of this symposium is to highlight the research advances in protein design from academic, government, and industrial institutions by convening and promoting the exchange of ideas. Thus, there will be a poster session at the symposium. This session will provide individuals the opportunity to present their research and interact with meeting attendees.

The City College of New York/CUNY

Jeffrey Hartgerink earned his PhD at the Scripps Research Institute in 1999, completed his post-doctoral training in 2002 at Northwestern University and started his independent research career at Rice University in 2002 in the departments of chemistry and bioengineering. He is a Searle Scholar and Camile-Dreyfus Teacher-Scholar award winner. His group is focused on understanding and applying supramolecular chemistry, particularly peptide self-assembly. He has many publications which describe the design, synthesis, characterization and biomedical application of peptides which form micelle, alpha-helix, beta-sheet and collagen architectures.

Amy E. Keating is an associate professor of biology at MIT, where she has been on the faculty since 2002. She received her AB from Harvard in physics (1992), her PhD from UCLA in organic chemistry, working with Kendall N. Houk and Miguel Garcia-Garibay (1998), and she carried out postdoctoral studies with Peter S. Kim and Bruce Tidor at the Whitehead Institute and MIT from 1998-2002. Her lab is pursuing computational and experimental studies of protein-interaction specificity, including the design of protein-protein interactions.

David G. Lynn is recognized for contributions in the general areas of molecular recognition, synthetic biology and chemical evolution, the development of chemical and physical methods for the analysis of supramolecular self-assemblies; signal transduction in cellular development and pathogenesis; molecular skeletons for storing and reading information; and the origins of the evolution of biological order. After a fellowship at Columbia University and teaching briefly at the University of Virginia and Cornell University, he served as Professor of Chemistry at the University of Chicago. He moved to accept the Asa Griggs Candler Professorship in Chemistry and Biology at Emory University in 2000. In 2002, Lynn was appointed as one of 20 inaugural Howard Hughes Medical Institute Professors to discover research approaches that better integrate graduate and undergraduate educational opportunities. In 2006, he was appointed Chair of the Department of Chemistry.

Anne Skaja Robinson is professor and associate chair for biochemical engineering, Department of Chemical Engineering, University of Delaware, Newark. She received her BS (1988) and MS (1989) from The Johns Hopkins University and her PhD (1994) from the University of Illinois at Urbana-Champaign. Following a Post Doctoral Fellowship (1994-1997) at the Massachusetts Institute of Technology, Robinson joined the faculty at the University of Delaware, Assistant Professor (1997-2003), Associate Professor (2003-2008), Full Professor and Associate Chair (2008-Present). The Robinson laboratory is interested in understanding the fundamental interactions between molecules, both in isolation and in the complex environment of the cell. Her honors include a DuPont Young Professor Award, and a National Science Foundation Presidential Early Career Award for Science and Engineering (PECASE) Award, given to the top 5% of NSF Career award winners. Robinson has been actively involved in the American Chemical Society, serves on the editorial board of Biotechnology and Bioengineering and Biotechnology Journal, and was chosen to serve on the Advisory Committee for Pharmaceutical Sciences of the Food and Drug Administration. She has also been an ad hoc reviewer for many NIH and NSF study sections.

Mark Young is professor of plant sciences, Montana State University, Bozeman. Young’s research interests lie with viruses which span a broad diversity, ranging from fundamental questions of virus structure/function relationships, virus ecology and evolution, to their use of in nanotechnology. His undergraduate training at UC Berkeley was in Biochemistry (BS; 1980) and Soils & Plant Nutrition (BS; 1980). He completed his PhD at UC Davis (1987) where his research focused on the characterization of the dsDNA virus CaMV and satellite RNAs with Bob Shepherd and George Bruening. Dr. Young traveled to Canberra Australia for a post doc at CSIRO where he worked on Barley yellow dwarf virus and catalytic RNAs (1987-1990). In 1990, he accepted a faculty position in the structural biology group within the Department of Biological Sciences at Purdue University (1990-1994). At Purdue University his research focused on the structural and chemical basis of virus assembly and disassembly. In 1994, Dr. Young joined the faculty at Montana State University moving through the ranks to Professor of Plant Sciences and Microbiology. His research at MSU has two major components; (i) the isolation and molecular characterization of unusual archaeal viruses from high temperature environments (>80C) and (ii) the understanding and application of viruses and other protein cage architectures as biotemplates for materials synthesis. His research program is supported by grants from NIH, NSF, NASA, DoD, and DOE. Young also served as the founder and Director of the MSU Thermal Biology Institute (1997-2005) and as Director of the Montana NSF EPSCoR Program (1997-current).

As the structures and functions of natural genomes are unveiled, it becomes increasingly possible to extend the chemical principles most central to living systems beyond the realm of present-day organisms and evolve new functions. We will argue that amyloid, best known for its association with degenerative maladies including diabetes, prion disorders, including mad cow cross-species infectious particles, and Alzheimer’s diseases (AD), represents a uniquely “functional” scaffold for this evolution. Control of the self-assembly of these supramolecular ordered protein assemblies, seemingly accessible to all α-amino acid polypeptide sequences, may be critical for disease intervention, but even more relevant for the origins of chemical evolution. Here we report that diverse morphologies evolve from peptide solutions of the Alzheimer's disease related AΒ peptides. A tight interplay between predictive methods and experimental interrogation has revealed that these assemblies, ranging from fibrils, sheets, helical ribbons, hollow vesicles, twisted ribbons, and nanotubes, emerge from nucleating clusters whose propagation is fed by free peptide. Physical stabilization of a nucleus with pH, metal ions, or small molecules can dictate successful selection of a specific morphology. Nucleation can also drive bond formation, stabilizing and further increasing the half-life of a selected structure and the final structures themselves can be remarkable catalysts. These findings we view as initial steps towards a synthetic biology where a rich diversity of approaches is emerging for the construction of supra-molecular self-assemblies that can be selected for desired functional properties.

Nature utilizes heterotrimers in many of the most abundant collagens in humans including types I, IV, V, VI, VIII, IX and XI. Recently we introduced a method of controlling the self-assembly of peptides into collagen-like heterotrimeric helices utilizing electrostatic interactions to gain specificity. These mimetic peptides more closely resemble natural heterotrimeric collagens and may give us better insight into their structure and function. In this talk I will discuss our most recent results on the types of electrostatic interactions found in our systems and how these interactions effect the structure and thermodynamics of the assemblies.

A main challenge in the development and production of protein therapeutic agents is the tendency of many proteins to aggregate. This undesirable self-association reaction generally leads to the disruption of the protein’s biological function, and results in significant losses of time and money in industrial processes. Typically viewed as irreversible, protein aggregation is also at the heart of numerous human diseases, including most neurodegenerative disorders, such as Alzheimer’s and BSE. Our goals are to improve understanding of the molecular and cellular interactions that lead to protein aggregation, and to develop novel methods to combat aggregation and increase the efficiency of protein expression and production, both in vivo and in vitro. In this talk, I will present several examples of our approach, highlighting the importance of integrating cellular and molecular strategies.

In this talk, we will discuss ongoing efforts aimed at extending and customizing our previously developed protein design framework (i.e., IPRO) fir a variety of protein engineering challenges. Specifically, we will highlight progress on three separate projects aimed at (i) introducing novel binding sites onto existing protein structures; (ii) redesigning enzymes for altered cofactor specificities; and (iii) selecting for domains and mutations that enrich antibody libraries with variants that selectively bind a given ligand.

We are using experimental and computational analysis to probe how coiled-coil-mediated interaction specificity is established in vitro, using peptides derived from the human bZIP transcription factors as a model. Beginning with comprehensive experimental measurements of native interactions, we have developed computational methods for predicting bZIP-like associations from sequence. Using these models, and a new computational design framework, we have designed synthetic peptides that bind to native human bZIP coiled-coil targets selectively.

Functional genomics tools have given rise to new strategies to identify and ultimately characterize novel proteins produced by hyperthermophilic microorganisms (Topt ≥ 80°C). Discussed here will be several examples of how transcriptional response analysis has been used to complement biochemical and biophysical characterization of novel proteins in model hyperthermophiles, such as Pyrococcus furiosus, Sulfolobus solfataricus, and Thermotoga maritima, in efforts aimed at determining their physiological functions.

We have developed viruses and other protein cage nanoparticels as constrained reaction vessels for materials synthesis. We have demonstrated that we can impart function by design to the protein cage nanopartices by directing both chemical and genetic modifications to the interior and exterior surfaces of the cage architectures. This has allowed us to create multifunctional materials with applications in medicine, electronics and chemical catalysis.