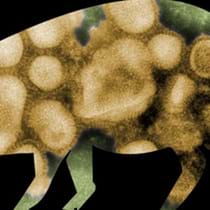 Presented by the Emerging Infectious Diseases and Microbiology Discussion Group

On May 28th, 2009, The New York Academy of Sciences (NYAS) is hosting a timely landmark afternoon symposium on the 2009 swine influenza (H1N1) outbreak. Influenza viruses continue to pose a major global public health problem. Understanding their pathogenicity and transmission is of the utmost importance in order to develop improved methods of prevention and control. This symposium will explore this latest outbreak with talks on the new recombinant virus, epidemiology, treatment, vaccine development and the public health implications of a worldwide pandemic.

This program will also be webcast as a live Webinar, providing an opportunity for non-local delegates to participate in this exciting and timely discussion.

The University of Rochester School of Medicine and Dentistry

The Great Non-pandemic of 1976

Early in 1976, just after the winter holidays, army recruits at Ft Dix, NJ were struck simultaneously by two epidemics of influenza, the larger epidemic caused by the H3N2 virus prevalent in the civilian community, and the smaller caused by an initially untypable virus. When the untypable virus was transmitted rapidly from person to person and was identified as a swine (H1N1) influenza virus, this was cause for alarm. Was this the beginning of a pandemic with a virus related to the notorious virus of 1918? If so, was this an opportunity for the first time in history to contain what seemed to be an isolated epidemic before it reached pandemic proportions? Within a relatively short period of time a National Immunization Program was begun. But no cases of "swine flu" were subsequently seen outside of Ft Dix and neurological disease in some vaccine recipients led to cessation of vaccination in early December of 1976. During and after the program, it was labeled a "Fiasco" and a "Debacle". It was also viewed as a "noble effort in public health" by some.

CDC Response to the Novel swH1N1 Outbreak: Putting Pandemic Preparedness to the Test

From just over one month ago when CDC laboratorians first identified the novel influenza strain that is now responsible for outbreaks on multiple continents, CDC has been adapting and responding to a continually changing situation. This has required rapid scale-up of activities ranging from basic laboratory testing and diagnostics development to field investigations and policy recommendations. The rapid spread of this new epidemic strain has required an unprecedented real-time sharing of information and expertise as countries adjust their response measures as new data becomes available. What was initially an outbreak response at the US-Mexico border has become an international cooperative effort aimed at mitigating an unexpected pandemic threat.

Since the first recorded outbreak of H5N1 in humans occurred in Hong Kong in 1997, there have been reports of limited human infections by avian influenza viruses. The recent cases of a novel (swine) H1N1 influenza virus have raised concerns regarding pandemic preparedness. " Pending the availability of vaccines, antiviral drugs will be the principle medical intervention for reducing morbidity and mortality" (WHO, Jan 2005). Although annual vaccination is the primary strategy for preventing complications of influenza virus infections, antiviral medications with activity against influenza viruses are useful adjuncts in the prevention of influenza, and are effective when used early in the course of illness for treatment. Four influenza antiviral agents are licensed in the United States: amantadine, rimantadine, zanamivir, and oseltamivir. Influenza A virus resistance to amantadine and rimantadine can emerge rapidly during treatment. Neuraminidase inhibitors (NAIs) are the newest class of antiviral agents for influenza. Currently there are two NAIs available: one is Tamilfu (oseltamivir) available orally and in suspension; the other is Relenza (zanamivir), available as an inhaled powder. The activity of both NAIs is specific for Type A and Type B influenza viruses and involves an interference with the reproductive cycle of the virus.

Active and Passive Immunization for Influenza

Antigenic shift is a rare but epidemiologically highly significant event in which a virus bearing a novel HA, with or without an accompanying novel NA, is introduced into the human population. A virus bearing a novel HA or NA has the potential to cause a pandemic if a large proportion of the population lacks immunity to the novel HA and NA and if the virus has the ability to spread efficiently from person to person. Highly pathogenic avian influenza A H5N1 viruses have been circulating in avian species since 1997 and have caused more than 420 human infections and more than 250 deaths since 2003 and the novel H1N1 virus that emerged in 2009 has caused more than 8000 cases in 40 countries. The outbreaks of human infection by the novel swine-origin H1N1 virus and H5 subtype avian influenza viruses along with sporadic reports of infections by H7 and H9 subtype avian influenza viruses underscore an urgent need to develop novel prophylactic and therapeutic interventions to protect humans in the event of a pandemic. Vaccination is the key strategy to prevent severe illness and death from pandemic influenza. We have also evaluated the efficacy of neutralizing human monoclonal antibodies for prophylaxis and treatment of H5N1 infection in BALB/c mice. The impact of the pandemic can be mitigated by preparations to control its spread. Promising findings of efficacy suggest that active and passive immunization approaches may be useful for prophylaxis and/or adjunctive treatment of human infections by novel influenza viruses.

Preparing for an Influenza Pandemic: Towards a Pre-Pandemic Vaccination Approach

After a quiet period of nearly thirty years, new influenza strains that have never been in humans before started to jump from birds or pigs to man, raising the risk of a new influenza pandemic. Unlike all the other influenza pandemics that happened in the 20th century and before, in the 21st century we have sophisticated technologies for diagnosis, therapy and prevention. Modeling of the spread of the pandemic suggests that vaccination is by far the best way to eliminate the risk of a new pandemic. The development of new vaccines against H5N1 and H1N1 viruses is under way: indeed effective vaccines adjuvanted with oil in water emulsions such as MF59 are licensed in Europe and under consideration in USA. Available data show that vaccination with these adjuvanted vaccines induces broad responses against H5N1 influenza strains belonging to various clades. The findings suggest that it is possible to vaccinate against the influenza pandemic before its start in order to prevent, for the first time in the history, its high toll of morbidity and mortality.

John Treanor, University of Rochester School of Medicine and Dentistry

The observation of person-to-person transmission of novel H1N1 viruses with genetically divergent HA has raised concern regarding the need for vaccination to control a potential pandemic. There are multiple options for vaccine development, including use of a monovalent supplemental vaccine, or incorporation of a novel H1 component into the trivalent, seasonal vaccine. In addition, new options are also available, including the use of adjuvants to improve responses and stretch vaccine supplies, and new substrates for vaccine production such as cell culture. Clinical studies must be conducted rapidly to gain information regarding the optimal dose and schedule of vaccination, and the effects of adjuvants on the specific H1 vaccine. Ultimately, intensive surveillance of trends in the epidemiology of the virus will drive the decision to deploy vaccines.

Upon recognition of the introduction of novel influenza A (H1N1) into humans in April of 2009, the multifaceted public health response at local, state, national, and international levels included building systems for diagnosis, outbreak response, clinical guidance, data collection and analysis, information exchange, and engagement of the public, press, and elected political officials. The ongoing response was informed by years of influenza pandemic planning and was facilitated by lessons learned from major public health emergencies in the recent past, including experience with SARS, the anthrax attacks of 2001, and ongoing recognition and response to cases of avian influenza occurring in humans in many countries. The presentation will include details on ongoing response efforts at all levels of public health and will focus on details specific to the response in New York City.