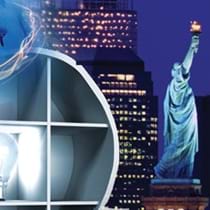 Presented by The New York Academy of Sciences, The LEVIN Institute, and the Alfred P. Sloan Foundation

There is hardly a more globally diverse city than New York. Since before Ellis Island welcomed immigrants to the United States, New York has been a melting pot of extraordinary life and vitality. In an era of dynamic globalization, how can New York reap expanding economic rewards for its diverse population through the active process of global entrepreneurship? Are there steps that can be taken to build upon the power of New York's diversity? Join the discussion of these questions and more with the expert panel.

Innovate New York:
This is the first event in the Innovate New York series of panel discussions that will explore why New York is not widely known as a hub of innovation, despite its acknowledged leadership in many fields. Examining the role of innovation across fields from finance to arts and culture, this series will convene leaders in science, technology, finance, and business with the public to discuss New York's strengths, opportunities and challenges.

Join us for all the Innovate New York events:

Amar Bhidé is the author of The Venturesome Economy: How Innovation Sustains Prosperity in a More Connected World, (Princeton University Press 2008) and The Origin and Evolution of New Businesses (Oxford 2000), Bhidé been studying entrepreneurship for about twenty years.
Bhidé is a Member of the Center on Capitalism and Society and spearheaded the launch of its eponymous journal, Capitalism and Society (published by the Berkeley Electronic Press) which he now edits (with Prof. Edmund Phelps). He is also a member of the Council on Foreign Relations and a Fellow of the Royal Society of Arts (RSA).

Bhidé served on the faculties of Harvard Business School (from 1988 to 2000) and the University of Chicago's Graduate School of Business. A former Senior Engagement Manager at McKinsey & Company and Vice President at E.F. Hutton, Bhidé served on the staff of the Brady Commission which investigated the stock market crash. Bhidé earned a DBA (1988) and an MBA with high distinction as a Baker Scholar (1979) from Harvard. He received a B.Tech from the Indian Institute of Technology in 1977.

Bhidé has several publications in the areas of entrepreneurship, strategy, financial markets and firm governance. His eight Harvard Business Review articles include "Efficient Markets, Deficient Governance," "How entrepreneurs craft strategies that work," "Bootstrap Finance: the Art of Start-ups," and "Hustle as Strategy." His work on financial markets and governance includes "The Hidden Costs of Stock Market Liquidity" in the Journal of Financial Economics and articles in the Journal of Applied Corporate Finance. Other publications include Of Politics and Economic Reality (Basic Books: 1984) and numerous articles in the Wall Street Journal, The New York Times, and The LA Times.

Center for an Urban Future

Jonathan Bowles is director of the Center for an Urban Future, an independent think tank in New York City that publishes studies about economic and workforce development issues affecting New York and other cities. During his nine years at the Center, he has written extensively about key economic trends facing New York and its five boroughs, the importance of diversifying New York's economy, the value of small businesses to cities and the economic challenges facing the middle class, the working poor and those on the city's margins.

The reports and commentaries he has authored, from a widely acclaimed 2007 study about the impact immigrant entrepreneurs are having on cities' economies to a report about what Staten Island should do to grow and diversify its economy, have been covered in publications ranging from USA Today to The Economist. In November 2008, the New York Times' City Room blog featured him in their "Ask the Expert" column, in which he fielded questions from readers for one week about the challenges facing immigrant entrepreneurs.

In 2008 he also served on Manhattan Borough President Scott Stringer's Small Business Task Force to examine the threats facing mom and pop retailers in the borough. In 2006, City Hall News named him one of 35 "Rising Stars" Under 40. In 2005, Time Out New York named him "New York's Finest Troublemaker." Before joining the Center, he worked as research director for former New York State Senator Franz Leichter and spent time as a freelance journalist. He lives in Queens with his wife and 1 year old son.

Mr. Nimetz is the Chief Operating Officer of General Atlantic, a leading global growth equity firm. Prior to joining General Atlantic in January 2000, Mr. Nimetz was a partner (and former chair) of the law firm of Paul, Weiss, Rifkind, Wharton & Garrison in New York City, where he concentrated on corporate and international law from December 1980 through January 2000. He previously practiced law as an associate, and partner, of Simpson Thacher & Bartlett between 1969 and 1977.

Mr. Nimetz served as Under Secretary of State for Security Assistance, Science and Technology from February through December 1980 and as Counselor of the Department of State (1977-1980). In those capacities, he supervised United States security assistance programs and the Department's international scientific and technological programs, including scientific and technical cooperation, nuclear nonproliferation issues, and international environmental and communications policies of the U.S. Government. He also supervised, among other things, U.S. policy on the Eastern Mediterranean (Greece, Turkey, Cyprus) and relationships with Eastern European countries.

From March 1994 through September 1995, Mr. Nimetz served as President Clinton's Special Envoy in the mediation of a dispute between Greece and the Former Yugoslav Republic of Macedonia. In 1999 he was appointed the Special Representative of the Secretary General of the United Nations in connection with the continuing negotiations between those two parties and continues to serve in that capacity.

His previous federal government positions include service as a Staff Assistant to President Lyndon Johnson from July 1967 to January 1969; and as a law clerk to Justice John M. Harlan of the Supreme Court of the United States from 1965 to 1967. In addition, Mr. Nimetz served as a Commissioner of the Port Authority of New York and New Jersey (1975 to 1977), and as Chairman of the United Nations Development Corporation (a New York City public corporation) as an appointee of Mayors Koch and Dinkins (1986-1994). He served in 1974 as executive director of NY Governor-elect Hugh Carey's transition.

Mr. Nimetz serves as a member of the Council on Foreign Relations, member and former chair of the Center for Democracy and Reconciliation in Southeast Europe, a trustee of Central European University, Budapest, and a trustee of the Levin Institute of the State University of New York. He served previously as founding chair of World Resources Institute, a trustee of Williams College, a director of The Revson Foundation and a director of The Nature Conservancy of New York. Mr. Nimetz has a daughter, Alexandra, and a son, Lloyd.

Vivek Wadhwa is a fellow with the Labor and Worklife Program at Harvard Law School and executive in residence/adjunct professor at the Pratt School of Engineering at Duke University. He helps students better prepare for the real world, lectures in classes and leads groundbreaking research into globalization and the U.S. competitive advantage. He is also an advisor to several start-up companies and a regular columnist for BusinessWeek.com.

Wadhwa has long been a pioneer of change and innovation in the technology industry, and has founded 2 software companies. He started his career as a software developer and gained a deep understanding of the challenges in building computer systems.

His quest to help solve some of IT's most daunting problems began at New York based investment banking powerhouse CS First Boston, where he was Vice President of Information Services. There he spearheaded the development of technology for creating computer systems which was so successful that CSFB decided to spin off this business unit into its own company, Seer Technologies. As Executive Vice President and Chief Technology Officer, Wadhwa helped grow the nascent startup into a $118 million publicly traded company.

With the explosion of the Internet, Wadhwa saw an even greater opportunity to help businesses adapt to new and fast changing technologies, and started Relativity Technologies. As a result of his vision, Wadhwa was named a "Leader of Tomorrow" by Forbes.com. Relativity was named as one of the 25 "coolest" companies in the world by Fortune Magazine.

Wadhwa's research at Duke University has focused on the impact of globalization on the engineering profession, the competitive threat from India and China, and one of America's greatest advantages – its skilled immigrants. This research has received worldwide attention and acclaim.

Mr. Wadhwa holds an MBA from New York University and a B.A. in Computing Studies from the Canberra University in Australia. He is founding president of the Carolinas chapter of The IndUS Entrepreneurs (TIE), a non-profit global network intended to foster entrepreneurship. He has been featured in thousands of articles in worldwide publications including The Wall Street Journal, Forbes Magazine, Washington Post, New York Times, U.S. News and World Report and Science Magazine. He has also made many appearances on U.S. and international TV stations including CNN, ABC, NBC, CNBC and the BBC.