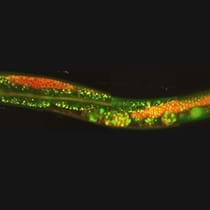 The New York Area C.elegans Discussion Group meetings will be held in the evenings from 6:30-8:30 PM and will be followed by a reception to which all participants are welcome. Each meeting will include four presentations by graduate students, post-docs, or by laboratory heads. Talks are selected from area laboratories by the program committee with an emphasis on new and emerging data.

Quiescence alters the regulation of developmental timing by lin-4 and let-7-family microRNAs in C. elegans

In many animals, the developmental progression of some progenitor cells can be interrupted by a quiescent, non-proliferative period. However, little is known about mechanisms that maintain developmental potential during quiescence. Dauer diapause in C. elegans is an example of an optional quiescent period that can interrupt development between the second and third larval stages in response to environmental cues (1). Because the pattern and sequence of cell divisions occur normally following dauer diapause, developmental pathways that specify cell fate must accommodate this variable and potentially lengthy interruption (2, 3). The existence of developmental pathways that operate specifically in larvae whose development is interrupted by dauer diapause is suggested by the finding that some heterochronic genes required for the specification of stage-specific cell fates during continuous development are dispensable post-dauer (3). Heterochronic genes have been studied primarily in the lateral hypodermal seam cells. Seam cells undergo an asymmetric, self-renewing division once per larval stage, with a symmetric, proliferative division inserted specifically at the beginning of the L2 stage. The Hunchback-like(HBL-1) transcription factor promotes L2 fate, and must be down-regulated to allow L3 fate to occur. Several factors are important for this down-regulation, including three let 7-family microRNAs (let-7-Fam miRNAs). Loss of these factors causes reiteration of L2 fates in the L3 stage, leading to the sustained expression of larval fates in the hypodermis of adult animals (4). We find that HBL-1 is down-regulated normally during dauer diapause in wild-type larvae. However, we find that let-7-Fam miRNAs are dispensable for post-dauer L3 cell fate, establishing that the developmental pathway that promotes L3 fate during continuous development is altered by dauer diapause. We provide evidence that this alteration is caused by a potentiation of miRNA activity during or post-dauer. First, we find that the lin-4 miRNA is sufficient to specify L3 cell fates in post-dauer larvae, but not in continuously developing larvae. Second, we find that the miRISC(microRNA-induced silencing complex) component NHL-2 is required for the proper expression of adult fates in post-dauer adult hermaphrodites that lack the three let-7-Fam miRNAs. Third, we find that the levels of mature lin-4 and let-7-Fam miRNAs are not elevated during or post-dauer, consistent with a potentiation of miRNA activity involving nhl-2. We propose that potentiation of miRNA activity during or post-dauer diapause is one mechanism that preserves developmental potential during quiescence.
*This study was done in Victor Ambros lab

The controlled turnover of proteins is essential for the majority of cellular processes, including cell proliferation and cell death. The majority of protein turnover in the cell is governed by the 26S proteasome, a highly conserved multi-subunit protease complex with essential roles in regulating proteins levels in the cytoplasm and nucleus of all eukaryotes. In addition to the well studied roles of 26S in cell cycle regulation and removal of misfolded proteins, proteasome activity has also been implicated stress response, gene expression, DNA repair, immune regulation, and carcinogenesis. The central role of the 26S proteasome in the selective degradation of intracellular proteins involved in the cell cycle has made it a target of considerable interest in the development of novel anti-cancer therapeutics. We have developed a screening protocol to identify compounds with characteristics of small molecule proteasome inhibitors using Caeonarhabditis elegans germ line. This screen is able to identify compounds that induce germ line phenotypes characteristic of a reduction in proteasome function such as changes in polarity, aberrant nuclear morphology, and stimulation of apoptosis. This basic protocol is amenable to a high throughput (96-well) format and has been used successfully to identify multiple compounds for further analysis.

After endocytosis, most cargo enters the pleiomorphic early endosomes in which sorting occurs. As endosomes mature, transmembrane cargo can be sequestered into inwardly budding vesicles for degradation, or can exit the endosome in membrane tubules for recycling to the plasma membrane, the recycling endosome, or the Golgi apparatus. Endosome to Golgi transport requires the retromer complex. Without retromer, recycling cargo such as the MIG 14/Wntless protein aberrantly enters the degradative pathway and is depleted from the Golgi. Endosome-associated clathrin also affects the recycling of retrograde cargo and has been shown to function in the formation of endosomal subdomains. Here, we find that the Caemorhabditis elegans endosomal J-domain protein RME-8 associates with the retromer component SNX-1. Loss of SNX-1, RME-8, or the clathrin chaperone Hsc70/HSP-1 leads to over-accumulation of endosomal clathrin, reduced clathrin dynamics, and missorting of MIG-14 to the lysosome. Our results indicate a mechanism, whereby retromer can regulate endosomal clathrin dynamics through RME-8 and Hsc70, promoting the sorting of recycling cargo into the retrograde pathway.

The neuromusculature that drives the reproductive behavior of the C. elegans hermaphrodite, egg laying, is anatomically simple but is regulated by multiple neurotransmitter systems. We have identified a neuropeptide signaling pathway that inhibit motor neurons of the egg-laying neuromusculature. These neuropeptides are FMRFamide-related peptides that activate a Go-coupled receptor encoded by the gene egl-6. One source of inhibitory peptides is a pair of anterior sensory neurons that are carbon dioxide-sensing neurons. This simple circuit comprising only sensory neurons and motor neurons promises to be a useful model for molecular genetic studies of peptidergic signaling in the nervous system.