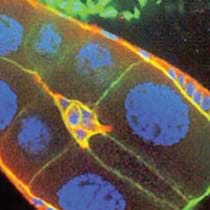 This is a free event. Advance registration is encouraged.

Individual sensory neurons generally express single sensory receptors from a repertoire that can run into the thousands. This is accomplished by a cell's choice to express only one receptor while excluding expression of the rest. Studies of olfaction in mice raised an intriguing possibility that a feedback signal from the sensory receptor protein itself plays a role in directing repressed state of genes encoding alternative receptors. Photoreceptor cells (PR) in the adult Drosophila eye express five different rhodopsins, the G-coupled seven trans-membrane proteins that detect light. In particular, R8 PRs express either Rh5 (in pR8 subset) or Rh6 (in yR8 subset), but never both. Most R7 PRs express either, Rh3 or Rh4. This rhodopsin expression is established by the end of pupation through stochastic and deterministic developmental mechanisms. We asked whether feedback signals from rhodopsin proteins participate in repressing the expression of other rhodopsin genes. We tested mutants of rhodopsins 3, 4, 5 and 6 for inappropriate expression of alternative members of the family. In young flies that lack Rh6, yR8s are empty of rhodopsin proteins. However, in older adults, these cells start to express Rh5, which normally is present exclusively in pR8s. A rh6-lacZ reporter correctly marks yR8 cells in mutants, suggesting that the absence of Rh6 leads to de-repression of Rh5 in the context of proper specification of yR8. Thus, Rh6 signal does not participate in the initial rhodopsin choice, but rather acts to maintain normal yR8 function by repressing Rh5 expression in the adult. Loss of function of other rhodopsin genes does not lead to inappropriate expression of alternative members of the family in their own PRs, yet they can substitute for Rh6 and repress Rh5 in yR8s. Thus, rhodopsin proteins, in addition to their main function as light receptors that initiate phototransduction cascade, can also direct transcriptional repression and maintain functional identity of yR8 PR throughout the life of the fly.

Specialized stem cells are required in a number of organs, such as the gut and skin to replenish tissues with new cells and maintain homeostasis, as well as to establish different cell types during organogenesis. Although a number of studies have examined the mechanisms by which stem cells regulate homeostasis, not much is known about how they are established during development, and the mechanisms by which they generate other differentiated cell types during this period. The recent identification of intestinal stem cells (ISCs) in the Drosophila midgut provides a highly tractable genetic system for investigating their role in intestinal organogenesis. Here we use lineage-tracing experiments to investigate the progenitors of these stem cells in the Drosophila larval midgut, and examine the molecular cues they employ to establish different cell types during development. We have identified a mechanism that allows these progenitors to proliferate in an undifferentiated state during larval development, and eventually generate ISCs, as well as the differentiated cell types present in the adult midgut.

Role of the Exon Junction Complex in EGFR Signaling

The exon junction complex (EJC) plays a major role in posttranscriptional regulation of mRNAs. It is loaded onto mRNAs upstream of exon-exon junctions as a consequence of splicing, and is transported with them to the cytoplasm, where it can regulate translation, nonsense-mediated decay, or mRNA localization. In a screen for genes required for normal photoreceptor differentiation in Drosophila, we isolated three alleles of mago nashi (mago), which encodes a core subunit of the EJC. We found that mago mutants are defective in signaling by the epidermal growth factor receptor (EGFR) due to a dramatic decrease in Mitogen-activated protein kinase (MAPK) mRNA levels. MAPK mRNA produced from the genomic locus, but not from a cDNA, is also decreased when Mago is depleted from cultured cells. Two of the other EJC core subunits, Y14 and the RNA binding protein eIF4AIII, are also necessary to maintain normal MAPK mRNA levels, but the fourth core component, Barentsz, which is recruited to the complex following the completion of splicing, does not affect MAPK. Knocking down RNPS1 and SRM160, two splicing factors that interact transiently with the core EJC, also reduces MAPK mRNA levels. MAPK is a large gene. Although MAPK is the primary target of Mago in eye development, Mago depletion also reduces the levels of mRNAs transcribed from several other large genes. Together, our data suggest that the EJC may specifically facilitate the splicing of large introns in Drosophila.