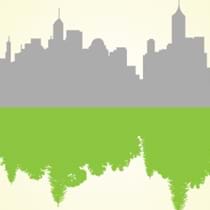 Join Dr. Eric W. Sanderson of the Wildlife Conservation Society and author of "Mannahatta: A Natural History of New York City" and Charles C. Mann, author of "1491: New Revelations of the Americas Before Columbus" for a moderated discussion of the landscape of New York City prior to European settlement.

This program, jointly developed by Urban Green Council and The New York Academy of Sciences, will include short presentations by the authors and a broad ranging discussion of the human and environmental history of our region, including the import of this knowledge on the sustainable use of our region’s resources.

Both "Mannahatta: A Natural History of New York City" and "1491: New Revelations of the Americas Before Columbus" will be available for sale.

CHARLES C. MANN’s most recent book, 1491, won the U.S. National Academy of Sciences’ Keck award for the best book of the year. A Correspondent for The Atlantic Monthly, Science, and Wired, he has covered the intersection of science, technology, and commerce for many newspapers and magazines here and abroad, including BioScience, The Boston Globe, Fortune, Geo (Germany), The New York Times (magazine, op-ed, book review), Panorama (Italy), Paris-Match (France), Quark (Japan), Smithsonian, Der Stern (Germany), Technology Review, Vanity Fair and The Washington Post (magazine, op-ed, book review). In addition to 1491, he has co-written four other books: The Second Creation: Makers of the Revolution in 20th-Century Physics (1986; rev. ed., 1995); The Aspirin Wars: Money, Medicine, and 100 Years of Rampant Competition (1991), Noah’s Choice: The Future of Endangered Species (1995), and @ Large: The Strange Case of the Internet’s Biggest Invasion (1998). He has also written for CD-ROMs, HBO, and the television show Law and Order, and was the text editorial coordinator for the internationally best-selling photographic projects Material World (1994), Women in the Material World (1996), and Hungry Planet (2005). A three-time National Magazine Award finalist, he has received writing awards from the American Bar Association, the American Institute of Physics, the Alfred P. Sloan Foundation, the Margaret Sanger Foundation and the Lannan Foundation (a 2006 Literary Fellowship). He is now working on a companion volume to 1491; an early excerpt appeared in National Geographic in May 2007.

Eric W. Sanderson is a Senior Conservation Ecologist at the Wildlife Conservation Society in New York City. He is interested in creating sustainable relationships between people and the rest of nature at all scales. He received his Ph.D. in ecosystem and landscape ecology from the University of California, Davis, in 1998, and the same year founded the "Landscape Ecology and Geographic Analysis" program at the Wildlife Conservation Society. Dr. Sanderson and colleagues created the Human Footprint map, the first look at human influence globally at less than 1 square mile resolution, and generated a map of the "Last of the Wild" areas representing the largest remaining wildernesses on Earth. He is also an expert on species conservation planning and has organized planning efforts to save lions, jaguars, bears, gazelles and bison, among other species. Recently he directed the Mannahatta Project, an effort to reconstruct the original ecology of Manhattan Island at the time of European discovery in 1609. Four hundred years later, in 2009, Abrams published his book, “Mannahatta: A Natural History of New York City,” illustrated by Markley Boyer; he also curated an exhibition at the Museum of the City of New York in 2009. He also led the team which created themannahattaproject.org, a website which allows New Yorkers to explore the environment of 1609 in terms of the blocks of the city today. In 2009 he was the New York Prize Fellow in Sustainable Cities and Social Science Research at the Van Alen Institute, in collaboration with the Social Science Research Council, exploring possibilities for the next 400 years of Manhattan’s ecological development. His work has been featured in the New York Times, National Geographic Magazine (cover story in September 2009), CNN, NPR, The New Yorker (profile in 2007) and other outlets.

Peter Marcotullio is Associate Professor in the Department of Geography at Hunter College, City University of New York and Senior Fellow at the CUNY Institute for Sustainable Cities. Prior to coming to CUNY, Dr. Marcotullio was Adjunct Senior Fellow at the United Nations University, Institute of Advanced Studies (UNU-IAS), working from the UNU’s Office at the UN, New York. From 2006-2008 he was Visiting Associate Professor, Urban Planning Program, Columbia University. Between 1999 and 2006, Dr. Marcotullio was also teaching full time, first as a Lecturer and then Professor, in the International Urban and Regional Planning lab, Department of Urban Engineering, University of Tokyo. Dr. Marcotullio’s research interests include urban environmental transition theory, globalization and urban change, ecosystem approaches to urban and regional environmental planning and management and the impacts of urbanization on the environment. He has published over 40 articles in peer-reviewed journals and books. His edited volumes include Scaling Urban Environmental Challenges: From Local to Global and Back (2007), Earthscan, James & James, Pub, with Gordon McGranahan, Towards Sustainable Cities: East Asian, North American, and European Perspectives on Managing Urban Regions (2004), Ashgate Publishing Limited, with Andre Sorenson and Jill Grant, and Globalization and the Sustainability of Cities in the Asia Pacific Region (2001) UNU Press, with Fu-chen Lo.

On September 12, 1609, Henry Hudson first set eyes on the land that would become Manhattan. It's difficult for us to imagine what he saw, but for more than a decade, landscape ecologist Eric Sanderson has been working to do just that. Mannahatta: A Natural History of New York City is the astounding result of those efforts, reconstructing, in words and images, the wild island that millions of New Yorkers now call home. By geographically matching an 18th-century map of Manhattan's landscape to the modern cityscape, combing through historical and archaeological records, and applying modern principles of ecology and computer modeling, Sanderson is able to re-create the forests of Times Square, the meadows of Harlem, and the wetlands of downtown. Filled with breathtaking illustrations that show what Manhattan looked like 400 years ago, Mannahatta is a groundbreaking work that gives readers not only a window into the past, but inspiration for green cities and wild places of the future.

1491: New Revelations of the Americas Before Columbus

A groundbreaking study that radically alters our understanding of the Americas before the arrival of the Europeans in 1492. Traditionally, Americans learned in school that the ancestors of the people who inhabited the Western Hemisphere at the time of Columbus’s landing had crossed the Bering Strait twelve thousand years ago; existed mainly in small, nomadic bands; and lived so lightly on the land that the Americas was, for all practical purposes, still a vast wilderness. But as Charles C. Mann now makes clear, archaeologists and anthropologists have spent the last thirty years proving these and many other long-held assumptions wrong. In a book that startles and persuades, Mann reveals how a new generation of researchers equipped with novel scientific techniques came to previously unheard-of conclusions.

Among them:
- In 1491 there were probably more people living in the Americas than in Europe.
- Certain cities -- such as Tenochtitlán, the Aztec capital -- were far greater in population than any contemporary European city. Furthermore, Tenochtitlán, unlike any capital in Europe at that time, had running water, beautiful botanical gardens, and immaculately clean streets.
- The earliest cities in the Western Hemisphere were thriving before the Egyptians built the great pyramids.
- Pre-Columbian Indians in Mexico developed corn by a breeding process so sophisticated that the journal Science recently described it as “man’s first, and perhaps the greatest, feat of genetic engineering.”
- Amazonian Indians learned how to farm the rain forest without destroying it -- a process scientists are studying today in the hope of regaining this lost knowledge.
- Native Americans transformed their land so completely that Europeans arrived in a hemisphere already massively “landscaped” by human beings.

Mann sheds clarifying light on the methods used to arrive at these new visions of the pre-Columbian Americas and how they have affected our understanding of our history and our thinking about the environment. His book is an exciting and learned account of scientific inquiry and revelation.

Located in the center of historical New York, Club Quarters, at 52 William Street (between Pine & Wall Streets), is just a short walk to our location.

The New York Academy of Sciences is a part of the Club Quarters network. Please feel free to make accommodations on-line to save significantly on hotel costs.