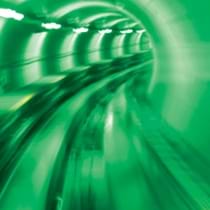 On a dry day, the MTA pumps 8 million gallons of groundwater to keep subway tunnels dry, and up to 13 million gallons during a storm. Currently, this water is treated as a nuisance and is pumped directly into the city sewers. One of the Transformational Recommendations made by the Blue Ribbon Commission on Sustainability and the MTA is to turn this groundwater into an asset by finding beneficial uses for it. This panel discussion will explore possible uses of the groundwater pumped from subway tunnels.

For more information on the MTA's sustainability plans, see the report "Greening Transportation and Infrastructure Discussion Group". This group seeks to regularly convene researchers and stakeholders -- including engineers, planners, and policy makers -- in the area of transportation and infrastructure planning. Symposia will be held to explore how to apply recent developments in technology to pursue two complementary goals simultaneously: solving pressing transportation and urban planning issues, and reducing the transportation sector's environmental impact and adverse effects on human health.

A print journalist by training and a New Yorker by choice, Ernest Tollerson joined the Metropolitan Transportation Authority in January 2007 as the MTA’s Director, Policy & Media Relations. Prior to joining the MTA, he handled research projects for the Partnership for New York City, a business-led NGO that conducted a lot of the early research on the feasibility of a congestion-pricing zone covering Manhattan’s two central business districts.

During his nine-year stint at NY Newsday from the mid-1980s to the mid-1990s, he served as the deputy op-ed editor and an editorial writer. In May 1990, he was named editor of the editorial pages and served in that post until Times Mirror folded NY Newsday in July of 1995. That October, he joined the New York Times as a national correspondent covering the 1996 presidential election. He later served as the political editor on the metro desk and then returned to editorial writing as a member of the Times’s editorial board.

Tom was both a Principal Engineer and Construction Manager and has experience with all areas of the Environmental discipline including the National Environmental Policy Act, Waste Management, Air & Water Pollution Prevention, and Green Design. Tom is directly responsible for CPM’s ISO 14001 certified Environmental Management System which includes commitments to prevent pollution, minimize waste, save natural resources and continual improve NYCT’s environmental performance.

Past president of the Torrey Botanical Society & board member of the NYC Soil & Water Conservation District, Dr. Mankiewicz has worked to incorporate ecology to treat water, capture carbon, and lower energy costs in urban centers. A number of working models have been constructed, including the first green roof in the Bronx, the first industrial-scale stormwater treatment facility on a six-acre, truck-to-barge material handling site on the Bronx River, and the first process water/greywater treatment green roof on the Linda Tool Corporation in Red Hook, Brooklyn.

John Rhyner is a licensed Professional Geologist and Senior Project Manager with P.W. Grosser Consulting in Bohemia, New York. Mr. Rhyner has 24 years of diverse consulting experience, over the past 10 years working on geothermal projects in New York City and Long Island. Mr. Rhyner has consulted on over 100 geothermal projects, currently on the anticipated LEED Gold New Education Building at Weeksville Heritage Center, Staten Island Museum geothermal retrofit at Snug Harbor Cultural Center, the General Theological Seminary, and update of NYC Department of Design and Construction’s Geothermal Heat Pump Manual. John is presently collaborating with NYCEDC and Columbia University on assessing the viability of geothermal throughout the city, including use of the technology for district heating and cooling. Mr. Rhyner received a BA in Geology from Dartmouth College and is working towards his MS in Hydrogeology from SUNY, Stony Brook. Mr. Rhyner is a LEED accredited professional and active member of the U. S. Green Building Council and National Ground Water Association’s Geothermal Interest Group.

NYCT’s Department of Capital Program Management (CPM) has incorporated sustainability elements in all of its design and construction projects. CPM Department includes sustainability initiatives in order to maximize energy efficiency, to improve indoor environment, to achieve waste reduction by usage of recycled and reusable materials, and to prevent pollution and conserve water and natural resources. CPM Department organized its efforts under the structure of ISO 14001 certified Environmental Management System (EMS).

One new Sustainability Initiative (SI) underway is a study with water and energy conservation is a natural progression in NYCT’s Sustainability Movement. This ground breaking conceptual study which explores various potential options for beneficial re-use of ground water extracted from NYCT’s many deep wells and well points. NYCT currently extracts significant amount of water from its underground structures in order to lower the water table. By looking for ways to reuse ground water, NYCT may introduce energy savings and environmental benefits. A final design project that will ultimately showcase groundwater benefits for the subway system will be the project deliverable.

The number of private, educational, and recreational buildings in the city employing geothermal (ground-source) heat pumps (GHPs) for indoor space heating and cooling is increasing. In a GHP, a building is “coupled” to the ground using water wells or plastic pipes (aka “loops”) installed in vertical boreholes drilled into the underlying geologic materials. There are several methods for this coupling, although in all cases a working fluid (typically groundwater or city water) is circulated between the building and ground to transfer the heat energy. GHPs are extremely energy efficient systems; however, urban settings present certain challenges that deem the technology unsuitable for most buildings and result in much higher first costs and lower ROIs than other locations. There is a particularly high construction cost premium to drill and install the infrastructure in the city. The required flow rate of water can be substantial to meet the building’s heating and cooling demand, and at most city properties there is insufficient open land area to locate wells or loops to sustainably meet this demand. The availability of an outside source of moderate temperature water, such as subway dewatering water, to buildings in the city would allow for more widespread deployment of this energy efficient technology. The cost premium would be largely eliminated, leading to much more cost competitive first costs and very favorable ROIs. Buildings that heretofore were not suited, due to limited outdoor areas to drill, can now be considered. This presentation will provide a general overview of the technology, water demands, and benefits to the industry of having an outside available water source. An example case study for the General Theological Seminary will be presented.