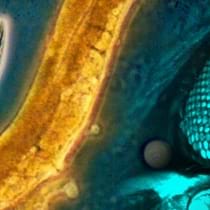 Developmental systems biology is a growing field poised to address a myriad of classic developmental topics including evolution, morphogenesis and patterning, organogenesis, signaling pathways and regulatory networks. Computational models that provide experimentally testable predictions and that are aimed to understand the complex mechanisms underlying spatiotemporal pattern formation are becoming an ever more useful tool for the developmental biologist. In this symposium, talks will focus on computational, quantitative imaging and genetic approaches to understand patterning and morphogenesis, and the gene regulatory networks that control development and evolution.

Angela DePace received her PhD in Biochemistry from the University of California San Francisco in 2002, where she worked with Jonathan Weissman on the molecular mechanism of yeast prion propagation. By measuring the growth of individual prion fibers she was able to demonstrate that a single protein can fold into multiple pathogenic conformations, each giving rise to different phenotypes, providing powerful evidence for the protein-only hypothesis. As a Helen Hay Whitney postdoctoral fellow, she worked with Michael Eisen at UC Berkeley, and as part of the Berkeley Drosophila Transcription Network Project to apply 2-photon microscopy and image processing techniques to characterize the transcriptional network directing embryonic development of multiple species of Drosophila. She started her own lab in the Department of Systems Biology at Harvard Medical School in April 2008, where her group is broadly interested in the molecular mechanisms of gene regulation and how they shape evolution of regulatory networks.

Stas Shvartsman was born on Odessa (Ukraine) and received his undergraduate degree in Physical Chemistry from the Moscow State University in Russia. His graduate degrees are in Chemical Engineering from Technion and Princeton. After a postdoctoral work at MIT, he had opened his laboratory at the Lewis-Sigler Institute for Integrative Genomics at Princeton. The Shvartsman lab combines genetic, imaging, and computational approaches to study pattern formation and morphogenesis. The model system is Drosophila development and the main emphasis is on the direct connection between experiment and theory.

Antonio Iavarone is an associate professor at the Institute for Cancer Genetics and Departments of Neurology and Pathology of Columbia University Medical Center, New York. He received an M.D. degree and Pediatric Residency from the Catholic University of Rome. He was a research fellow at the University of California at San Francisco and the Memorial Sloan Kettering Cancer Center, New York, until 1998, when he joined the Faculty of Neurology and Developmental and Molecular Biology at the Albert Einstein College of Medicine, New York. He assumed his current position in 2002. His research has focused on delineating the role of Id2 and the retinoblastoma tumour-suppressor protein in development and pediatric cancer of the nervous system. Hi lab is collaborating with the group of Andrea Califano at Columbia University on the identification of master regulatory factors in neral development and brain tumors.

Quantitative comparison of gene expression at cellular resolution in Drosophilids

Understanding how gene regulatory networks evolve requires us to measure the functional consequences of even small changes in sequence. We have applied high-resolution microscopy and image processing methods to blastoderm embryos of multiple species of Drosophila to determine the expression patterns of key transcriptional regulators of segmentation and a subset of their targets in their native context. These species span a range of evolutionary distances, and comparative sequence analysis reveals a wide variety of changes in relevant cis-regulatory elements. Our imaging techniques allow multiple types of statistically rigorous inter-species comparisons to be made, both between individual embryos and between composite multi-gene models, revealing widespread quantitative changes in expression patterns. We measure multiple types of gene-specific variation, including changes in spatial position, number of cells comprising a pattern, and the dynamics of expression. Our comparative analyses aim to put these differences in the context of complete developing embryos. Which changes are due to differences in the geometry of the embryos and which are due to genetic differences in the transcriptional networks? Furthermore, which are changes initiated by variation in the trans-network, and which are due to changes in how cis-regulatory sequences interpret that network? Differentiating these types of variation will allow us to interpret which specific sequence changes have functional consequences for gene expression, and provide insights into the molecular mechanism of gene regulation and the functional constraints under which regulatory networks evolve.

Enzymes can have remarkable substrate specificity. Fructokinase, for example, phosphorylates only one substrate, fructose. Protein-modifying enzymes, however, can have hundreds of substrates. Is processing of multiple substrates ordered in space and time, or are they processed concurrently and compete for a common enzyme? Ordered modification of multiple substrates by a single enzyme is essential for cell cycle control, where it can be mediated by kinetic proofreading mechanisms. Here we show that enzymes /in vivo/ can also operate in a strongly competitive regime. Based on genetic and imaging approaches, we propose that in the early /Drosophila/ embryo multiple substrates of the highly conserved Mitogen Activated Protein Kinase (MAPK) compete for this enzyme. As a consequence, the signaling activity of MAPK becomes dependent on the levels and spatial distributions of its substrates. The resulting substrate competition network integrates the actions of maternal morphogen gradients that pattern the embryo.

Self-renewal and proliferation of neural stem cells and the decision to initiate neurogenesis are crucial events directing brain development. Here we show that the ubiquitin ligase Huwe1 operates upstream of the N-Myc-DLL3-Notch pathway to control neural stem cell activity and promote neurogenesis. Conditional inactivation of the Huwe1 gene in the mouse brain caused neonatal lethality associated with disorganization of the laminar patterning of the cortex. These defects stemmed from severe impairment of neurogenesis associated with uncontrolled expansion of the neural stem cell compartment. Loss and gain of function experiments in the mouse cortex demonstrated that Huwe1 restrains proliferation and enables neuronal differentiation by suppressing the N-Myc-DLL3 cascade. Notably, human high-grade gliomas carry focal hemizygous deletions of the X-linked Huwe1 gene in association with amplification of the N-myc locus. Our results indicate that Huwe1 balances proliferation and neurogenesis in the developing brain and this pathway is subverted in malignant brain tumors.