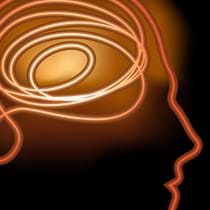 Therapeutic Inhibition of BACE1 for the Treatment of Alzheimer's disease

Alzheimer's disease (AD) is a devastating, age-dependent, neurodegenerative disorder that impairs memory, thinking, and leads, ultimately, to death. One in 10 individuals over the age of 65 and nearly half of those over the age of 85 are affected. One of the distinguishing features of Alzheimer's disease pathology is deposition of beta-amyloid peptide (Aβ)-containing senile plaques in the brains of patients. According to the amyloid hypothesis, increased production or decreased clearance and degradation of Aβ initiates a molecular cascade ultimately leading to neurodegeneration and the clinical manifestation of cognitive decline and senile dementia. A major strategy for AD therapeutics is the development of small molecules that reduce levels of Aβ in the brain. Among all the various proposed methods for reducing Aβ, the inhibition of β-secretase (BACE1) is particularly attractive: BACE1 is a key enzyme in the production of Aβ, BACE1-knockout mice do not produce Aβ and appear healthy and finally, BACE1 is an aspartic protease, a class of proteases for which successful drugs have been developed for HIV.

Despite extensive efforts in the development of BACE1 inhibitors by most of the major pharmaceutical companies over the past nine years, no ideal drug candidate is currently in clinical trials. In spite of the lack of obvious success, much progress has been made to incorporate the drug-like properties in the evolution of better inhibitors and in our understanding of the basic biology surrounding BACE1. This symposium will review the current knowledge of the role of BACE1 in AD pathogenesis and provide an update on the progress of drug development efforts.

The BPDG at the New York Academy of Sciences represents a diverse group of scientists and others with an interest in biochemistry, molecular biology, biomedical research, and related areas. Members are from pharmaceutical and biotechnology companies, and university and medical center research facilities across the Eastern United States. The group also serves as the Biochemical Topical Group for the American Chemical Society's New York Section. The purpose of the BPDG is to bring together diverse institutions and communities, industrial and academic, to share new and relevant information at the frontiers of research and development.

Alzheimer's disease (AD) is characterized by brain lesions called amyloid plaques, extracellular deposits of the beta-amyloid peptide (Aβ). Familial forms of AD are caused by genetic mutations that increase production of the long, fibrillogenic Aβ42 form of the peptide, suggesting Aβ42 plays an early central role in AD pathogenesis. Aβ is generated from the amyloid precursor protein (APP) by two proteases called β- and γ-secretase. The β-secretase, a novel transmembrane aspartic protease we originally termed β-site APP cleaving enzyme (BACE), was discovered simultaneously by several groups in 1999. BACE is required for the generation of all forms of Aβ, including Aβ42, and therefore is a prime therapeutic target for the treatment of AD. BACE knockout mice are devoid of Aβ production and amyloid plaque formation, evidence that BACE is the authentic β-secretase, and thus it represents a promising drug target.

As we will hear at this symposium, recent promising advances have been made toward the identification of BACE inhibitor drugs. However, the development of BACE drugs has also proven challenging. Other targets upstream of BACE responsible for the regulation of enzyme levels and activity should be identified and evaluated, as they may offer alternative or complementary therapeutic strategies as opposed to direct BACE inhibition. Of particular relevance in this regard is the observation that BACE levels are elevated in AD brain, suggesting increased BACE levels may play a role in AD pathogenesis. If so, normalizing BACE levels may prove therapeutically efficacious while still allowing normal BACE function. Interestingly, impaired glucose metabolism occurs early in AD, and our work has demonstrated that glucose deprivation increases BACE levels and Aβ production in the brains of an APP transgenic model of AD, the Tg2576 mouse. We have identified the molecular mechanism of the BACE increase and showed that glucose deprivation induces phosphorylation of the translation initiation factor eIF2α(eIF2α-P), which in turn increases the translation of BACE. Pharmacologically inducing eIF2α phosphorylation directly increases BACE levels. Conversely, genetically preventing eIF2α phosphorylation blocks the glucose deprivation-induced BACE increase. Chronic glucose deprivation in Tg2576 mice increases levels of eIF2α-P, BACE, Aβ, and amyloid plaques. Importantly, eIF2α-P and BACE are elevated in aggressive plaque-forming 5XFAD transgenic mice, and BACE, eIF2α-P, and amyloid load are all correlated in humans with AD. Amyloid itself also appears to increase eIF2α-P and BACE in vivo. These results strongly suggest that eIF2α phosphorylation increases BACE levels and causes Aβ overproduction, which could be an early, initiating molecular mechanism in sporadic AD. Taken together, our work is consistent with the hypothesis that impaired glucose metabolism may lead to increased BACE levels by the eIF2α-P translational mechanism, and subsequent elevation of Aβ generation. Once amyloid plaques form, Aβ causes BACE levels to increase further, thus accelerating Aβ generation and plaque growth via a positive-feedback loop.

The aspartyl protease β-site APP cleaving enzyme 1 (BACE1) initiates processing of the amyloid precursor protein (APP) into Aβ peptide, the major component of Alzheimer's disease (AD) plaques. BACE 1 knockout mice have been highly instrumental in defining parameters for BACE1 as a therapeutic target for Alzheimer's disease. Multiple studies have unequivocally demonstrated that BACE1 is the major beta-secretase in brain, and that ablation of BACE1 in transgenic models of AD prevents the development of a broad array of AD-like pathology, neurodegeneration and behavioral deficits. Early reports showed BACE1 knockout mice to be fertile, healthy and without overt deficits in morphology, physiology or gross behavior indicating that the absence of BACE1 is well tolerated. More recent studies have uncovered adverse phenotypes in the BACE1 knockout animals including cognitive deficits, emotive alterations, hypomyelination, and schizophrenia-like behavioral traits, which indicate potential untoward effects in the clinic. A critical question therefore is how much BACE1 reduction is required to effect a change on AD-like pathologies. To determine the extent of BACE1 reduction required to significantly inhibit pathology, PDAPP mice, a transgenic mouse model of AD overexpressing human mutated APP, having a heterozygous BACE1 gene knockout were evaluated for Aβ generation and for the development of pathology. Although the 50% reduction in BACE1 enzyme levels caused only a 12% decrease in Aβ levels in young mice, it nonetheless resulted in a dramatic reduction in Aβ plaques, neuritic burden, and synaptic deficits in older mice. Quantitative analyses indicate that brain Aβ levels in young APP transgenic mice are not the sole determinant for the changes in plaque pathology mediated by reduced BACE1. These observations demonstrate that partial reductions of BACE1 enzyme activity and concomitant Aβ levels lead to dramatic inhibition of Aβ-driven AD-like pathology, making BACE1 an excellent target for therapeutic intervention in AD.

Amyloid reduction is an attractive therapeutic approach for Alzheimer disease (AD) and the inhibition of β-secretase (memapsin 2, BACE1), the aspartic protease that initiates the processing of APP leading to the production of Aβ, has emerged as a major area for developing inhibitor drugs. During the past ten years, various strategies have been applied in the evolution of β-secretase inhibitors into a drug candidate. A successful drug candidate for β-secretase is likely to be a mimic to the catalytic transition-state. It needs to be potent with Ki near low nM range, size small enough to penetrate the blood-brain-barrier, selective vs. other human aspartic proteases and processes good drug properties. The first potent β-secretase inhibitor, OM99-2 (892 Da; Ki = 1.6 nM), contained eight residues with the scissile bond substituted by a hydroxyethylene transition-state isostere. To facilitate the use of structure-based evolution of inhibitor structure, we determined the crystal structure of the catalytic domain of β-secretase bound to OM99-2. For the reduction of inhibitor size, the loss of potency from the removal of outside residues P4, P3’ and P4’ was compensated by the increase in protein-ligand interaction of central residues from P3 to P2’. Structural modules discovered for selectivity and potency were incorporated into new inhibitors. The path of inhibitor structural evolution was guided by data from enzyme kinetics and Aβ inhibition in cells and mice. This process has produced some inhibitors in 600s Da range with good drug-like properties. Inhibitor GRL-8234, Ki of 1.2 nM and cellular IC50 of about 1 nM, has good selectivity vs. cathepsin D and memapsin 1 and brain penetration of about 4%. Administration of GRL-8234 at 50 mg/Kg reduced Aβ by about 60% in the plasma and about interstitial Aβ by over 50% in the brain of Tg2576 mice. To test the rescue of age-related cognitive decline in a transgenic AD mouse model, we continuous delivered GRL-8234 in Tg2576 for up to about 8 months. Such treatment produced significant difference in cognitive performance over the control mice in Morris Water Maze in escape latency, time in quadrant and annulus crossing index. The cognitive performance of the inhibitor treated mice, which had also reduced brain amyloid plaques, was near that of the wild type mice. These developments suggest that the significant progress has been made in the development of memapsin 2 inhibitors toward a drug candidate and the future of this line of drug development for an AD drug appears encouraging.

The development of drugs with potential for disease modification is pivotal for the effective treatment of Alzheimer's Disease (AD). One of the many strategies being investigated is to eliminate the formation of Aβ that deposits as senile plaques in the brains of AD patients and is thought to play a central role in AD pathogenesis. Aβ is generated physiologically following sequential processing of Amyloid Precursor Protein (APP) by β-site APP cleaving enzyme (BACE-1) and γ-secretase. Consequently, inhibition of BACE-1, a rate-limiting enzyme in the production of Aβ, is an attractive therapeutic approach for the treatment of Alzheimer's disease.

Using a rational drug design approach we identified a potent and selective non-peptidic BACE-1 inhibitor, GSK188909. In this presentation, the in vitro and in vivo profile of this inhibitor will be described along with the challenges in the development of drug-like BACE-1 inhibitors.

BACE1 is Not the Rate-Limiting Enzyme in A Production in the Brains of APPswe Transgenic Mice: Pharmacological Characterization of BACE1 Using Novel Brain Penetrant Inhibitors.
David Riddell, Wyeth Research