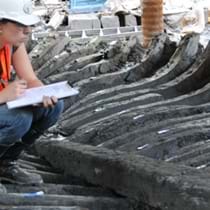 An Historic Hull on Hallowed Ground

Presented by the Tribute WTC Visitor Center and Science & the City

New Yorkers were fascinated this summer when archaeologists monitoring during construction on the south side of the World Trade Center's redevelopment site discovered the 32-foot remnant of an 18th century wooden ship's hull. Since then, archaeologists, maritime historians, and conservationists removed the remains and have been working to document and analyze this fascinating relic of New York history.

This evening, join Tribute WTC Visitor Center and Science & the City for a public event at the New York Academy of Sciences featuring presentations by three of the experts involved in this exciting excavation project in Lower Manhattan. Archaeologist Michael Pappalardo, whose firm AKRF is leading the excavation, will describe the archaeological details of the WTC renovation site and the ship discovered there in July. Norman Brouwer, formerly the chief maritime historian at the South Street Seaport Museum, will present images of the ship and tales of other ships discovered underground in New York. And conservator, Nichole Doub, will explain how she and her lab are stabilizing this ship's remains and explain options for preserving 200+ year old wooden remains. Academy member Brian Ferguson, a professor of anthropology at Rutgers University-Newark, will moderate the event.

Brian Ferguson is a professor of anthropology at Rutgers University-Newark. He received his BA through PhD at Columbia University; his doctoral research investigated long-term socio-cultural change in Puerto Rico.

Beginning as a graduate student, he has spent a quarter century studying war and today is internationally recognized as a leading authority on tribal warfare. He has written articles on many aspects of war, appearing in publications from New York Newsday to Scientific American to Foreign Affairs. His 1995 book, Yanomami Warfare, has been widely accepted as the solid core within the recent controversy over scientific research among the Yanomami. Dr. Ferguson also studies the cultural history of policing and crime in New York City.

In 1992, Dr. Ferguson organized the Columbia Graduate Anthropology Alumni Association, the first such organization in American anthropology. During his eight years as its president, the organization became a catalytic center for innovative projects and perspectives. In 1999 he created the Working Group on Political Violence, War, and Peace at the Center for Global Change and Governance. He is developing plans for a series of international conferences with the United Nations University on ethnic violence, civil war, and genocide. He was co-vice chair of the Anthropology Section of the New York Academy of Sciences from 1993 to 1994, and co-chair from 1995 to 1996.

Norman J. Brouwer is a maritime historian based in Mystic, CT. He was Marine Historian, Curator of Ships, supervisor of library and archives at the South Street Seaport Museum from 1972-2004, and is the former advisor to the maritime division of the National Trust for Historic Preservation, evaluator of maritime preservation projects, and member of the committee that drafted the Secretary of Interior's Guidelines for maritime preservation projects. Mr. Brouwer served as Principal Investigator for three expeditions to the Falkland Islands to investigate and record the remains of American 19th century sailing vessels, and he was primary contractor or participant in a series of cultural resource surveys of over 2,000 wrecked or abandoned ships lying in New York Harbor, funded by the US Army Corps of Engineers.

He holds an MA in Historical Museums from the State University College at Oneonta, Cooperstown Graduate Program, and conducted graduate studies at The Frank C. Munson Institute of American Maritime Studies at Mystic Seaport and the University of Connecticut. He has written extensively on maritime history. His publications include The International Register of Historic Ships 1985, 1993, 1999, and he is co-author of The Story of Sail (Weldon Press, Australia), Whaling and the Art of Scrimshaw (South Street Seaport Museum), All Available Boats, The Evacuation of Manhattan Island on September 11, 2001 (Spencer Books), Historic Structure Report, and Sailing Ship BALCLUTHA of 1886 (US National Park Service).

Nichole Doub holds an MSc in Conservation for Archaeology and Museums and a MA in Principles of Conservation from University College London in England and a BA in Classical Archaeology from the University of North Carolina at Chapel Hill. Her specializations include archaeometallurgy and East Mediterranean/Eastern European archaeology. She has been involved in excavations in Romania, England, Turkey, Greece, Egypt, Jordan, the United States, and Mexico. Before coming to work at the MAC Lab, Nichole was the Archaeological Objects Conservator at the Royal Albert Memorial Museum in Exeter, England where she worked on a range of Roman, Anglo Saxon and Medieval material from the Princesshay excavations. Nichole has been working as the Project Conservatorfor the Roman/Byzantine excavations at Noviodunum, Romania and is coordinating with Babes-Bolyai University in Cluj to establish a national, centralized conservation laboratory and training program. She has also been employed on conservation projects at the Fitzwilliam Museum at the University of Cambridge, the National Trust, English Heritage and the archaeological excavations at Çatalhoyuk, Turkey.

Michael Pappalardo is a Senior Archaeologist and Technical Director at AKRF and a Registered Professional Archaeologist with more than 20 years of experience in cultural resource management, working in the context of both National Historic Preservation Act compliance and state and local level legislation. He received his MA in Anthropology from Binghamton University where he focused on the application of ground-penetrating radar to urban archaeological contexts and his BA from New York University. As a professional archaeologist he has directed numerous research projects involving a wide variety of cultural resource types, from the earliest periods of American prehistory through the historic period, often as part of major development or transportation projects. Mr. Pappalardo has worked on and managed projects in many states from Maine to California but has primarily focused on the New York region and New England.