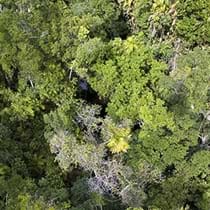 Between Earth and Sky

Join Science & the City for an evening with “The Queen of the Forest Canopy” as she explains what 30 years of exploration have taught her about the intimate connection between humans and trees. Dr. Nalini Nadkarni is an international pioneer in forest canopy studies and is known for fostering the communication of canopy research among scientists and to the general public. She has climbed trees on four continents, using mountain-climbing techniques, construction cranes, walkways, and hot air balloons to explore the world of animals and plants that live in the treetops.

Dr. Nadkarni and her collaborators have revealed that the organisms and processes of the treetops are critical players in such important environmental issues as saving biodiversity, stabilizing global climate, and enhancing sustainability of forest resources. Her specific questions – pursued in the cloud forests of Costa Rica and the temperate rainforests of Washington State – concern how canopy-dwelling plants affect nutrient cycling and provide resources for arboreal birds and mammals. Her experimental work in the treetops shows that canopy communities are vulnerable to projected changes wrought by global climate change.

In the last decade, Dr. Nadkarni's growing concerns about the negative effects of humans on forest ecosystems have prompted efforts to go beyond informing the “environmentally aware” portion of the public about the importance of forest canopies and forest ecosystems to humans. She uses non-traditional vectors to teach the general public about trees and the ecosystem. To do so, she has successfully and boldly collaborated with some unexpected partners to bring her scientific results to non-traditional venues, such as prisons, faith-based communities, and rap music clubs. She has also integrated aspects of artistic expression with scientific documentation of the natural world, and has brought artists, musicians, and Inuits to the canopy. One recent collaboration was with the San Francisco-based dance troupe, Capacitor, to explore and portray the processes of forest growth through the medium of the human body. The resulting dance, biome, has been performed in major cities in the US.

Her most recent project, funded by the Washington State Department of Corrections, is to bring science and sustainability to incarcerated men and women in prisons. Scientists collaborate with prisoners to carry out research projects in conservation and restoration biology. Inmates have raised endangered frogs, prairie plants, and butterflies, which are then released from captivity to the wild. This has given prisoners rare access to nature, as well as a sense of accomplishment and connection to doing something good.

Nadkarni has also developed ways to encourage other researchers to see public outreach as a benefit, rather than a burden. Although scientists are often portrayed as being incapable of expressing themselves beyond the narrow enclave of their fellow researchers, she has been successful in drawing researchers out of their field laboratories and university offices to more broadly disseminate their own research. In 2007, she established the National Science Foundation-funded “Research Ambassador Program” to guide scientists to do outreach to non-traditional public audiences.

This event is part of the Girls Night Out at the New York Academy of Sciences Series, featuring leading women scientists on topics of special interest to women (and the people who love them).

Other events in this series include:

Nalini Nadkarni is a faculty member at The Evergreen State College, in Olympia, Washington, where she splits a position with her husband, a tropical entomologist. Her research is supported by grants from the National Science Foundation and the National Geographic Society. Dr. Nadkarni has published more than 100 scientific articles and three scholarly books. Her recent awards include a Guggenheim Fellowship for excellence in scholarship and creativity, the J. Stirling Morton Award of The National Arbor Day Foundation, an Aldo Leopold Leadership Fellowship, the Presidency of the Association for Tropical Biology and Conservation, and the Award for Canopy Ecology. Nadkarni says that communicating the discoveries she has made is as important and diverse as the canopy communities she studies. In 1994, she co-founded the International Canopy Network, a non-profit organization to foster communication among researchers, educators, and conservationists concerned with forest canopies. Her work has been featured in popular magazines such as Natural History, Glamour, Discover, and Ranger Rick. She has also appeared in numerous television documentaries, including Bill Nye the Science Guy, Good Morning, America, and the Emmy-Award winning National Geographic Heroes of the High Frontier.