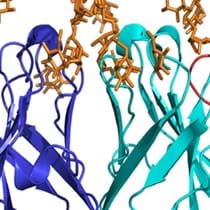 Glycosylation creates a diverse array of carbohydrate epitopes attached to cell surface proteins and lipids. These carbohydrates or glycans play crucial roles in a diverse array of medically relevant biological processes from viral pathogenesis to tumor cell metastasis and stem cell differentiation. The biosynthetic and molecular complexity of these biopolymers, which are branched and often epimeric, has constrained our understanding of both the chemistry and biology of these molecules. New approaches to research in this arena are bringing together chemists and biologists to meet the analytical, synthetic and biochemical challenges of understanding this important class of biomolecules.

Jon Lai received his B. Sc. (Hons.) in Biochemistry from Queen’s University in Ontario, Canada, then completed his Ph.D. in 2004 in Biophysics and Chemistry at the University of Wisconsin – Madison with Sam Gellman. From 2004 – March 2007, he was Helen Hay Whitney post-doctoral fellow with Chris Walsh at Harvard Medical School and then studied virus envelope glycoprotein structure and function as a research associate in Stephen Harrison’s lab (Harvard Medical School) from April – November 2007. He began his current appointment as Assistant Professor of Biochemistry at the Albert Einstein College of Medicine in December 2007. His research program has two major focus areas: (i) dissecting and evolving antibody-antigen interactions by phage display; (ii) understanding mechanisms of viral membrane fusion and how this process can be inhibited with designed peptides and proteins.

Lara K. Mahal is an Associate Professor of Chemistry at New York University. An expert in glycomics, she is currently a Sloan Foundation Fellow and the recipient of the NIH Director’s New Innovator Award, an NSF CAREER Award and a Beckman Fellowship. Professor Mahal obtained her B. A. from the University of California at Santa Cruz, her Ph.D. at the University of California at Berkeley and was a Jane Coffins Child Postdoctoral Fellow at Sloan Kettering Research Center.

Samuel J. Danishefsky received his B.S. degree at Yeshiva University. He did his graduate research under the late Professor Peter Yates. He then joined the laboratory of Professor Gilbert Stork at Columbia University as an NIH Postdoctoral Associate. His first academic position was at the University of Pittsburgh, where he joined as Assistant Professor in 1963. He was promoted to Associate Professor, Professor, and University Professor. In January 1980, he moved to Yale University and was named Eugene Higgins Professor in 1981. Appointed by President A. Bartlett Giamatti as Chairman of the Department of Chemistry, he served until 1987. He became Sterling Professor at Yale in 1990. In 1993, Professor Danishefsky moved back to New York as Professor of Chemistry at Columbia University and the Eugene Kettering Chair and Head of the Laboratory of Bioorganic Chemistry at Memorial Sloan-Kettering Cancer Center. In 1996, he shared the Wolf Prize in Chemistry with Professor Gilbert Stork. In 2006, he was the recipient of the Franklin Medal in Chemistry, the Bristol Myers Squibb Lifetime Achievement Award in Chemistry, and the National Academy of Sciences Award in the Chemical Sciences.

Professor Suzanne Walker received her Ph.D. from Princeton University in 1992, where she eventually joined the faculty as a Professor of Chemistry. In 2004, she moved to the Department of Microbiology and Molecular Genetics at Harvard Medical School. Professor Walker started her independent career working on cell wall biosynthesis in bacteria, an area that continues to be a major focus. She currently studies metabolic pathways involved in microbial survival and pathogenesis. The underlying motivation for her projects is to develop the scientific foundations for the discovery and evaluation of new targets, strategies, and compounds to treat resistant bacterial infections.

Peng Wu received his doctorate from the Scripps Research Institute in 2005 under the guidance of Professor K. Barry Sharpless. From September 2004 to April 2005, he was a visiting student in the laboratory of Professor Craig J. Hawker at IBM Almaden Research Center and at the University of California, Santa Barbara. His graduate studies, in collaboration with the Hawker lab, demonstrated for the first time the powerful utilization of click chemistry in the preparation of well-defined macromolecules and nanostructured materials. After completing postdoctoral work at the University of California, Berkeley with Professor Carolyn Bertozzi, he joined the faculty of Albert Einstein College of Medicine in 2008. The Wu lab research spans the disciplines of chemistry, materials science and biology, with a focus on the invention of new tools for studying protein glycosylation, especially those related to infectious diseases.

The Society for Glycobiology

General operating perspective in pharma is that small molecule drug targets are fashioned by chemists through various means. The current emphasis is on producing huge libraries for heavy-duty screening. By contrast, biologics are presumed to arise from strictly natural means. The lecture will deal with the very special nature of small molecule natural products in enabling small molecule leads. It will also show that chemical synthesis is now able to think realistically about gaining access to biologic‐level targets through chemistry.

Glycosylation is important in a variety of biological processes from cell signaling to tumor cell metastasis. Our laboratory has developed tools to examine both dynamic glycosylation as part of signaling by O-GlcNAc and complex cell surface glycans. Herein we discuss our work in these areas.

O-GlcNAc transferase is an essential mammalian enzyme that functions as a nutrient sensor to couple metabolic status to the regulation of a wide variety of cellular signaling pathways. OGT catalyzes the transfer of N-acetyl glucosamine from UDP-GclNAC to serines and threonines of cytoplasmic, nuclear, and mitochondrial proteins, including transcription factors, tumor suppressors, kinases, phosphatases, and histone modifying proteins. Aberrant O-GlcNAcylation by OGT has been directly linked to insulin resistance, diabetic complications, cancer and neurodegenerative diseases including Alzheimer's. We will report the crystal structure of human OGT, both as a binary complex with UDP and as a ternary complex with a peptide substrate, and will discuss the mechanistic implications of the structures. We will also describe progress towards the development of inhibitors useful as cellular probes to explore the biology of OGT and to assess its potential as a therapeutic target.

Imaging the glycome within a cellular environment is now possible using chemical tools from the emerging field of bioorthogonal click chemistry.
Azides and alkynes are phenotypic bioorthogonal chemical reporters that are small, biologically inert, and capable of reacting with each other at physiological pH. Most glycan subtypes can be imaged by metabolic labeling with azide- or alkyne-bearing monosaccharide precursors. In this talk, I will discuss our recent results of imaging and profiling sialylated and fucosylated glycans in living organisms using a click chemistry-based approach.