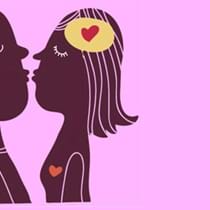 What happens when you fall in love? Helen Fisher says it begins when someone takes on special meaning. “The world has a new center,” she says, “then you focus on him or her. Your beloved’s car is different from every other car in the parking lot, for example. People can list what they don’t like about their sweetheart, but they sweep these things aside and focus on what they adore. Intense energy, elation, mood swings, emotional dependence, separation anxiety, possessiveness, a pounding heart and craving are all central to this madness. But most important is obsessive thinking.” As Fisher says, “Someone is camping in your head.”

A biological anthropologist who has conducted fMRI studies on the brains of people in love, Fisher maintains that humans have evolved three core brain systems for mating and reproduction: lust, romantic attraction, and attachment to a long term partner. Fisher and her colleagues have put 49 people into a brain scanner (fMRI) to study the brain circuitry of romantic love: 17 had just fallen madly in love; 15 had just been dumped; 17 reported they were still in love after an average of 21 years of marriage. One of her central ideas is that romantic love is a drive stronger than the sex drive. She says, “After all, if you causally ask someone to go to bed with you and they refuse, you don’t slip into a depression, or commit suicide or homicide; but around the world people suffer terribly from rejection in love.” She also maintains that taking serotonin-enhancing antidepressants (SSRIs) can potentially dampen feelings of romantic love and attachment, as well as the sex drive.

Fisher has looked at marriage and divorce in 58 societies, adultery in 42 cultures, patterns of monogamy and desertion in birds and mammals, and gender differences in the brain and behavior. In her newest work, she reports on four biologically-based personality types, and using data on 28,000 people collected on the dating site Chemistry.com, she explores who you are and why you are chemically drawn to some types more than others.

This evening, learn about the brain in love, and gain understanding of your own personality type and the science behind what attracts you to others. A reception and booksigning will follow the presentation.

Presented in conjunction with Works & Process at the Guggenheim, which will host Motion & Emotion, an evening with Helen Fisher and the Paris Opera Ballet on February 14 & 15, 2010.

This event is part of the Girls Night Out at the New York Academy of Sciences Series, featuring leading women scientists on topics of special interest to women (and the people who love them).

Other events in this series include:

Helen Fisher is a Research Professor and member of the Center for Human Evolution Studies in the Department of Anthropology, Rutgers University, and Chief Scientific Advisor to the Internet dating site, Chemistry.com, a division of Match.com.

A longtime member of the New York Academy of Sciences, she has conducted extensive research on the evolution and future of human sex, love, marriage, gender differences in the brain and how your personality type shapes who you are and who you love. Fisher is author of five books on the evolution and future of human sexuality, monogamy, adultery and divorce, gender differences in the brain, the chemistry of romantic love, and most recently, human personality types and why we fall in love with one person rather than another.

Her most recent book, Why Him? Why Her? Finding Real Love by Understanding Your Personality Type (Henry Holt, January 2009), draws on data from genetics and neurochemistry to answer the question why we fall in love with one person rather than another.