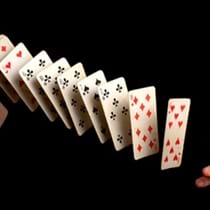 Presented by Scientific American and Science & the City

Magic tricks work because humans have a hardwired process of attention and awareness that is hackable. Stephen L. Macknik and Susana Martinez-Conde, two vision scientists and authors of Scientific American MIND's November/December cover story, reveal just how magicians distract and fool an audience by surreptitiously manipulating people’s attention, tricking them into focusing on irrelevant objects or occurrences and into making incorrect assumptions about the purpose of an action.

World-renowned magician, The Amazing Randi, will illustrate some of these cognitive tricks.

Susana Martinez-Conde, PhD, is the Director of the Laboratory of Visual Neuroscience, Division of Neurobiology at the Barrow Neurological Institute. Her laboratory's research focuses on understanding the neural bases of our visual experience. How can the electrical activity of a neuron, or a neuronal population, convey the color or brightness of an object? How can we determine the signal from the noise in a train of electrical impulses within a neuron? What type of neural code do neurons use to communicate information to each other? How are neural impulses grouped to represent the different features of a visual scene? To address these questions we use a combination of techniques, including fMRI, electrophysiological recordings from single neurons, psychophysical measurements, and computational models of visual function.

Stephen L. Macknik, PhD, runs the  Laboratory of Behavioral Physiology at the Barrow Neurological Institute. The Macknik laboratory is dedicated to studying the neural underpinnings of visual and sensory awareness and perception. A number of neurobiological techniques are employed so as to study the neural correlates of sensory experience, such as psychophysics (quantified measurements of behavior), electrophysiology of neuronal activity, and brain imaging such as functional Magnetic Resonance Imaging and macroscopic as well as microscopic optical imaging. A special interest in the laboratory is the study of microscopic blood flow driven by perception and awareness, and occurring during disease states.

James Randi has an international reputation as a magician and escape artist, but today he is best known as the world's most tireless investigator and demystifier of paranormal and pseudoscientific claims. Randi has pursued "psychic" spoonbenders, exposed the dirty tricks of faith healers, investigated homeopathic water "with a memory," and generally been a thorn in the sides of those who try to pull the wool over the public's eyes in the name of the supernatural. He has received numerous awards and recognitions, including a Fellowship from the John D. and Catherine T. MacArthur Foundation in 1986. In 1993, the PBS-TV "NOVA" program broadcast a one-hour special dealing with Randi's life work, particularly with his investigations of Uri Geller and various occult and healing claims being made by scientists in Russia. He is the author of numerous books, including The Truth About Uri Geller, The Faith Healers, Flim-Flam!, and An Encyclopedia of Claims, Frauds, and Hoaxes of the Occult and Supernatural. His lectures and television appearances have delighted - and vexed - audiences around the world. In 1996, the James Randi Education Foundation was established to further Randi's work. Randi's long-standing challenge to psychics now stands as a $1,000,000 prize administered by the Foundation. It remains unclaimed.