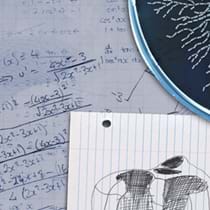 Systems biology seeks to understand not only the regulatory networks that govern cellular behavior but also the processes that govern the integration of higher-level physiological structures and functions. We are now witnessing the generation of predictive models that simultaneously address such systems at multiple scales — from the genome, to the cell, to the organ — in an attempt to account for their dynamism and complexity.

This symposium will bring together researchers who use the tools of systems biology to study multi-scale processes. Topics discussed will include bacterial sensing and response to the environment, tumor angiogenesis and invasion, and cardiac function.

Ned Wingreen received his Ph. D. in theoretical condensed matter physics from Cornell University in 1989. He did his postdoc in mesoscopic physics at MIT before moving, in 1991, to the newly founded NEC Research Institute in Princeton. At NEC, he continued to work in mesoscopic physics, but also started research on the statistical mechanics of protein folding. Thinking about proteins led him inexorably down the path into biology. During a sabbatical at UC Berkeley in 1999, his primary focus shifted to systems biology of bacteria. Wingreen joined Princeton University as a Professor of Molecular Biology in 2004, with a joint appointment in the Lewis-Sigler Institute as of 2008. Wingreen's current research focuses on modeling intracellular networks in bacteria

Alexander R. A. Anderson, PhD is co-director of the Integrated Mathematical Oncology (IMO) department and Senior member at Moffitt Cancer Center. Dr. Anderson performed his doctoral work on hybrid mathematical models of nematode movement in heterogeneous environments at the Scottish Crop Research Institute in Dundee, UK. His postdoctoral work was on hybrid models of tumor-induced angiogenesis with Prof. Mark Chaplain at Bath University, UK. He moved back to Dundee in 1996 where he worked for the next 12 years on developing mathematical models of many different aspects of tumor progression and treatment, including anti-angiogenesis, radiotherapy, tumor invasion, evolution of aggressive phenotypes and the role of the microenvironment. He is widely recognized as one of only a handful of mathematical oncologists that develop truly integrative models that directly impact upon biological experimentation. His pioneering work using evolutionary hybrid cellular automata models has led to new insights into the role of the tumor microenvironment in driving tumor progression. Due to his belief in the crucial role of mathematical models in cancer research he moved his group to the Moffitt Cancer Center in 2008 to establish the Integrated Mathematical Oncology department.

Dr. Rice is a Research Staff Member at the Center for Computational Biology at IBM’s Thomas J. Watson Research Center. He is a member of the Functional Genomics and Systems Biology Group and seeks to merge computational simulation with emerging technologies in genomics and proteomics. He is currently working on methods to infer cellular signaling pathways from high-throughput data. He has published extensively in the field of cardiac physiology simulation, including models of electrophysiology, calcium signaling and muscle contraction. This work continues from his Ph.D. thesis work at the Department of Biomedical Engineering of The Johns Hopkins University from which he graduated in 1998. He is currently an adjunct faculty member of the same department and teaches undergraduate and graduate courses in modeling and physiology.

Bacteria swim toward food (chemotaxis) by detecting temporal changes in their chemical environment and using this information to make a decision to swim straight or change direction. The chemotaxis system is remarkable for its sensitivity to multiple chemicals, over a wide range of concentrations. These properties rely on cooperativity within teams of receptors and on an adaptation system in which chemoreceptors are modified by methylation/demethylation. I'll discuss recent experiments that reveal new aspects of adaptation, including "assistance neighborhoods" in which tethered modifying enzymes can act on multiple receptors, and adaptive variation in the sizes of receptor teams which adjusts gain, all contributing to optimal chemotactic behavior.

An Integrated Approach to Cancer: Insights from Multiscale Mathematical Models

Mathematical and computational models are an ideal compliment to experimentation
as they allow for the integration of multiple experimental results across a range of
spatial and temporal scales. In application to cancer they hold great promise for
prediction of tumor outcomes; however their application has been limited by the lack of
experimental data integration. This highlights the need for a new integrated approach
to understanding cancer and biological systems in general. In this talk we discuss our
recent efforts using mathematical modeling, computation and experimentation to study
cancer progression, with a special emphasis on the role of the tumor
microenvironment. Specifically, to understand the competitive dynamics of tumor cells
in diverse microenvironments, we experimentally parameterized a hybrid discretecontinuum
mathematical model with phenotypic trait data from a set of related
mammary cell lines with normal, transformed, or tumorigenic properties. Analysis of the
relative performance of each phenotype in constrained versus unconstrained
microenvironments revealed that, although all cell types grew more slowly in resourceconstrained
microenvironments, the most aggressive cells were least affected by
microenvironmental constraints. Our results suggest that a critical feature of the
process of tumor progression is selection of cells that can escape from resource
limitations by achieving a relative microenvironmental independence.

Long QT Syndrome is an inherited or acquired disorder with a phenotype of a prolonged QT interval in the electrocardiogram (ECG) associated with an increased risk of arrhythmia and sudden cardiac death. This presentation describes an in silico model of Long QT type 1 (LQT1) in which genetic mutations at the ionic channel level can be simulated and the resulting changes in the ECG can be assessed. Collaborators at the University of Rochester, NY, provided in vitro ionic channel data from wild type (WT) and two LQT1 mutants (Mut A and Mut B) for which long-term clinical outcomes were known. The in silico prediction of much stronger QT-prolongation and arrhythmic events in Mut B vs. Mut A compares well with the clinical of outcomes in which corresponding populations had shown 70% vs. 25% likelihood of arrhythmia and sudden cardiac death over a 30 year window. Similar methodology could be applied to other mutations and numerous drugs that in prolonged QT interval in the ECG and are associated with an increased risk of sudden cardiac death.