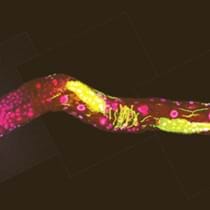 The New York Area C.elegans Discussion Group meetings will be held in the evenings from 6:30-8:30 PM and will be followed by a reception to which all participants are welcome. Each meeting will include four presentations by graduate students, post-docs, or by laboratory heads. Talks are selected from area laboratories by the program committee with an emphasis on new and emerging data.

Dreaming of a GLOWorm Repository/database/interface

The Skirball Institute of Biomolecular Medicine

The neuromusculature that drives the reproductive behavior of the C. elegans hermaphrodite, egg laying, is anatomically simple but is regulated by multiple neurotransmitter systems. We have identified a neuropeptide signaling pathway that inhibit motor neurons of the egg-laying neuromusculature. These neuropeptides are FMRFamide-related peptides that activate a Go-coupled receptor encoded by the gene egl-6. One source of inhibitory peptides is a pair of anterior sensory neurons that are carbon dioxide-sensing neurons. This simple circuit comprising only sensory neurons and motor neurons promises to be a useful model for molecular genetic studies of peptidergic signaling in the nervous system.

Dynamic remodeling of the actin cytoskeleton plays an essential role in all organisms. Our laboratory has established that in C. elegans the actin nucleation cassette encoded by Rac1-WAVE/SCAR-Arp2/3, hereafter referred to as the GEX ( G TPase/ E nhancer of nucleation/actin nucleation e X ecution) complex, is essential throughout development. However, cell polarization and migration requires dynamic interplay between filamentous actin (F-actin) and microtubules (MTs). Within a migrating cell, the nucleus migrates along MTs and is repositioned on F-actin, which requires distinct complexes composed of two novel nuclear envelope protein families, SUN and KASH domain proteins. To date, the role of actin nucleators in nuclear migration and positioning remains unknown. Using 4D movies we observed nuclear migration defects in various tissues at different developmental stages upon depletion of GEX molecules. Loss of GEX components leads to nuclear migration failure during early and late embryonic development and post-embryonic tissue formation. Accordingly, mutations in known nuclear migration proteins, including UNC-84 (SUN) and UNC-83 (KASH) lead to similar defects. In particular, the female and male pronuclei undergo a stereotypical migration within the one-cell zygote to form the one-cell embryo. Embryos depleted of WAVE/SCAR components or Arp2/3 components display a defective anterior migration of the male pronucleus in the one-cell zygote that is accompanied by altered non-muscle myosin-II dynamics, which affects the distribution of the polarity determinants, including PAR-2 and PAR-6. Additionally, mutation of actin nucleators delays the accumulation of tubulin to the centrosomes. In conclusion, our studies establish that Arp2/3-dependent actin nucleation contributes to nuclear migrations throughout development, and provide a novel system to examine the interaction of the MT and actin cytoskeleton.

The coordination of cell fate specification and proliferation is crucial during early germline development when the balance between these two processes establishes the stem/progenitor cell populations that ultimately produce gametes. In C. elegans, insulin/IGF-like receptor (IIR) signaling has been implicated in fertility, but the basis for this role was not previously characterized. We found that IIR signaling stimulates the larval germline cell cycle to ensure robust germ cell proliferation, separate from its well-characterized role in preventing dauer entry. This activity of IIR is distinct from Notch signaling, is predominantly germline-autonomous, and responds somatic activity of ins-3 and ins-33, genes encoding putative insulin-like ligands. IIR signaling in this role acts through the canonical PI3K pathway, inhibiting DAF-16/FOXO. However, signaling from these ligands does not inhibit daf-16 in neurons nor in the intestine, two tissues previously implicated in other IIR roles. Our data are consistent with a model in which (1) under replete reproductive conditions the larval germline responds to insulin signaling to ensure robust germline proliferation that builds up the germline stem cell population, and (2) distinct insulin-like ligands contribute to different phenotypes by acting on IIR signaling in different tissues.

Dreaming of a GLOWorm Repository/database/interface

Since before the first experiments with GFP, C. elegans has been an ideal system for the application and development of vital imaging. Yet there is a major lag between our community's increasing ability to acquire image data sets and our ability to view, analyze, and share their content. We envision an organized repository for optical images that allows existing light microscope data to be accessed and used experimentally by the whole community. A key part of making such an image collection useful for researchers will be delivery of images via the internet through a display that allows data from disparate sources to be analyzed while virtually superimposed in time and space. Such a framework for access and presentation can take advantage of the highly reproducible anatomy of developing embryos and worms to foster experiments such as virtual co-expression, direct mutant-to-wild-type comparisons, and quantitative assessments of different imaging regimes. I will present some early but encouraging steps in these developments, and I hope for critiques and suggestions from the community that can drive further development toward widely useful goals.