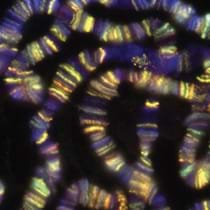 New York Area Drosophila Discussion Group meetings will held in the evenings from 6:30-8:30 PM and will be followed by a reception to which all participants are welcome. Each meeting will include four presentations by graduate students and post-docs selected from area laboratories by the program committee with an emphasis on new and emerging data.

A Novel Role of Myc in the Regulation of Organismal Growth and Metabolism, News from the Fly Room
Federica Parisi, City College (Paola Bellosta Lab)

This is a Free Event.  Advance Registration is Encouraged.

A Novel Role of dMYC in the Regulation of Organismal Growth and Metabolism, News from the Fly Room

In our laboratory, we seek to understand the mechanism(s) that control growth. Specifically, we interrogate the possibility of a novel function for dmyc in the regulation of systemic growth through the activation of metabolic pathways. Drosophila fat body, analogous to the vertebrate liver and adipose tissue, amongst all metabolic tissues, carries out a particularly significant role, since it is responsible for integrating an animal’s growth rate with nutrient availability. We show that expression of dmyc in the fat body controls animal growth and survival through a mechanism involving the regulation of lipid and glucose metabolism. We suggest that dmyc functions as sensor for amino acid availability and acts as a critical component of the foxo-insulin pathway. Our findings thus establish a novel link between dmyc expression in the fat body and the non-cell-autonomous control of growth, metabolism, and survival of the organism.

Ras signaling can promote a number of important processes including cell proliferation, cell survival, and differentiation. Excess Ras activation during development can disrupt normal patterning and cause developmental disorders while excess Ras signaling in mature tissues can lead to cancer. We report characterization of the gene Rabex-5 in Drosophila; we show in vivo evidence that Rabex-5 restricts Ras signaling, and we demonstrate that this negative regulation of Ras is required in multiple tissues and developmental processes in order to establish proper organism size, wing vein patterning, and eye versus antennal fate.

After mating, Drosophila melanogaster females are able to store sperm in the seminal receptacle and two spermathecae. Each of the spermathecae is surrounded by a layer of epithelial cells, which secrete proteins directly into the lumen of the cuticle cap where sperm are stored. It is well established that the accessory gland proteins (Acps) transferred by males to females upon mating have a profound effect on fertilization, female post-mating behavior, and sperm storage. However, little is known of the gene products expressed in the spermathecal secretory cells (SSC) and how these proteins affect reproduction.

I have identified tissue specific gene enhancers active during spermathecal morphogenesis or in the differentiated SSC. This allows me to genetically ablate the secretory cells of the spermathecae at different time points and to monitor their existence and function. Females that do not develop the SSC during the pupal stages, fail to store sperm properly in the seminal receptacle as well as the spermathecae. They also fail to ovulate, although they exhibit normal production of mature eggs. If I allow the SSC to develop normally and ablate them in the adult female, they are able to ovulate and fertilize eggs. However, these females do not store sperm in the two spermathecae and lay fewer eggs. These results suggest that the SSC secrete proteins that are required for maturation of the female reproductive tract to allow ovulation and for proper sperm storage in the spermathecae.

The coordinated orientation of bristles and epidermal hairs towards posterior in the Drosophila thorax is controlled by the activity of the Frizzled (Fz)/ Planar Cell Polarity (PCP) signaling pathway. We show that along with this pathway the ability of the epidermal tendon cells to resist the tension generated by the developing flight muscles is fundamental to establish the correct polarity of these structures. We discuss the role of chascon and its relation with the Fz/PCP signaling pathway during the planar polarization of the notum.