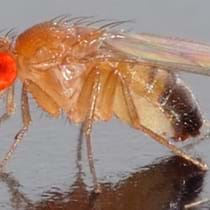 The New York Area Drosophila Discussion Group meetings are held in the evenings, and are followed by a reception to which all participants are welcome. Each meeting includes four presentations by graduate students and post-docs selected from area laboratories by the program committee, with an emphasis on new and emerging data.

This is a Free Event.  Advance Registration is Encouraged.

I conducted my Ph.D. work at the Max Delbrueck Center for Molecular Medicine in Berlin, Germany. The subject of my dissertation was the identification of the structural determinants that dictate the product specificity of the Steroid hydroxylases synthesizing Glucocorticoids and Mineralocorticoid. Subsequently, I moved to Cold Spring Harbor Laboratory to join Linda Van Aelst’s laboratory to work on diverse signaling aspects controlled by small GTPases of the Rho and Ras superfamilies. More closely engaging in the role of Rap1, I started to study its functions in cultured epithelial cells but prompted by the availability of distinct phenotypes and genetic possibilities continued by investigating developmental episodes in Drosophila melanogaster. Having spent 2 years in Ulrike Gaul’s laboratory at Rockefeller University, we collaboratively unraveled a novel functional interaction between Rap1 and its effector protein Canoe during the embryonic dorsal closure process late in gastrulation. After having returned to Cold Spring Harbor Laboratory this research since has been expanded to other components of a Rap1-dependent signaling network, that govern Rap1 activity and signaling output. Current efforts are focusing on diverse aspects of cell-cell adhesion and adherens junction biology in various tissues.

I was born in Madrid, Spain, in 1978. In 2000 I received a bachelor’s degree in Computer Engineering from Universidad Autonoma de Madrid. I then worked as a research associate at the Lawrence Berkeley National Laboratory, in Berkeley, California, in the laboratory of Dr. Carlos Ortiz de Solorzano, where I developed a computational microscopy platform for the three-dimensional reconstruction of serially-sectioned tissues. From 2001 to 2006 I was a graduate student and the Joint Graduate Group in Bioengineering of UC Berkeley and UCSF under the supervision of Drs. Carlos Ortiz de Solorzano and Mary Helen Barcellos-Hoff. There I developed image analysis tools to characterize nuclear morphology and to quantify the spatial distribution of cell populations. I applied these tools to the in situ characterization of a putative stem cell population in the adult mouse mammary gland. After obtaining my PhD degree in 2006, I moved to Jen Zallen’s lab, at the Sloan-Kettering Institute, in New York, where I have been using biophysical methods to investigate how mechanical forces regulate the dynamics of cytoskeletal proteins during Drosophila embryogenesis, and how this regulation affects cell behavior.

Ah-Ram Kim is a graduate student of the Department of Biochemistry and Cell Biology at Stony Brook University. A graduate of Handong University, South Korea (B.S, 2003), then He worked for Dr. Koh Lab in KAIST (Korea Advanced Institute of Science and Technology) to study angiogenesis. Now he is finishing his Ph.D program under Prof. John Reinitz and he will continue his work at the University of Chicago this July.

Andrew Tomlinson is Professor of Genetics and Development at Columbia medical school. He has been working on Drosophila cell-cell signaling for 30 years.

The modeling of tissues relies on context-dependent segregation and cohesion of defined cell populations. In epithelia, E-cadherin levels and activity are vital for such sorting processes; however, the functional interplay of factors impinging on E-cadherin to modulate specific cell sorting events remains largely elusive. We demonstrate that the functions of Rap1 and Echinoid (Ed), two factors that affect adherens junction (AJ) formation and cell sorting behavior, are coordinated by Canoe (Cno). cno acts as a Rap1 effector in maintaining the circumferentially seamless distribution of AJs and the clonal cohesion exhibited by mitotic lineages. Over-expression of Cno triggers the accumulation of AJ proteins, and signals through Ed to expand adherens junctional perimeters. We provide further evidence that Cno in addition synergizes in parallel pathways with Crb and a Rap1- and Cno-independent activity of Ed in the general homeostasis of AJs. These observations define Cno as a critical mediator between pathways regulating AJ integrity and clonal cohesion.

Axis elongation in Drosophila embryos occurs through coordinated cell rearrangements driven by the activity of the cytoskeletal proteins actin and myosin II, which generate contractile forces. Using dual-color time-lapse imaging of living Drosophila embryos, we have found that actin and myosin II localize to two different pools in intercalating cells, one associated with cell-cell junctions and another located at the medial-apical cortex in a fibrous meshwork. We have used custom image analysis to show that junctional myosin forms multicellular cable-like structures that are actively assembled and contract to form rosettes, promoting efficient tissue elongation. Our results show that mechanical tension generated by actomyosin contractility inhibits myosin dissociation from cell-cell junctions, leading to myosin accumulation, cable assembly and contraction. Simultaneously, intercalating cells undergo cell shape fluctuations, with rapid cycles of apical expansion and contraction. Apical contraction is preceded by the assembly of highly dynamic, medial actomyosin structures, while disassembly of medial contractile structures precedes cycles of cell expansion. Intercalating cells also undergo cell shape fluctuations in mutant embryos where the adjacent mesoderm is not specified. Together, these results suggest that the dynamic assembly of medial actomyosin structures generates intrinsic forces that drive oscillatory behaviors in intercalating cells. Oscillatory behaviors may be necessary to accommodate the increasing cellular strain resulting from junctional contractility and axis elongation.

The prediction of expression patterns from genomic sequence is a major research challenge in modern molecular genetics. Its solution requires an understanding of the transcriptional consequences for particular configurations of bound factors. One of the most informative experimental materials for such studies is an instance where the usual additive, modular behavior of enhancers breaks down. Such instances can reveal underlying rules, but the complexity of the experimental phenomena requires precise quantitative models for their interpretation. We developed a generalized and predictive model of quantitative, time-resolved mRNA expression of the Drosophila melanogaster gene even skipped (eve). I have used this model to understand non-additive behavior of 4 enhancer fusions of the -3.8 to -3.3 kb (stripe 3 enhancer) and the -1.6 to -1.1 kb (stripe 2 enhancer) regions of gene eve with and without spacer sequence between them. Quantitative gene expression data obtained by utilizing a site-specific RMCE technique allows for a precise computational analysis of gene expressions of multiple reporter constructs at single nuclei-6min temporal resolution. Analysis of non-classical behavior of 4 enhancer fusions revealed detailed biology of fundamental transcriptional mechanisms – competitive binding, cooperative binding, co-activation, direct repression and short-range quenching that are essential in the regulation of gene expression of eve. Furthermore, my computational model of eve is able to predict gene expressions of a variety of enhancers including stripe 2 elements of eve from 19 different Drosophila and Sepsis species and some of other pair-rule and gap gene enhancers with high accuracy.

Receptor tyrosine kinases (RTKs) and Notch proteins are different types of transmembrane receptors that transduce extracellular signals that control cell fate. Here we examine cell fate specification in the Drosophila ommatidium and examine how Notch acts together with the RTKs Sevenlesss (Sev) and the EGF receptor (DER) to define the R7 photoreceptor. The developing ommatidium grows by recruiting surrounding undifferentiated cells and then directing them to specific fates. The R7 photoreceptor derives from a cohort of three cells that are incorporated together. Two of these are specified as the R1/6 photoreceptor type by DER activation. These cells then activate N in the third cell (the R7 precursor), and this N signaling performs three roles. First it provides a block to photoreceptor specification; a block that DER signaling cannot overcome. The second role is (paradoxically) to negate the first; Notch signaling induces the expression of Sev which provides an RTK signal sufficient to overcome the block and thereby specify the cell as a photoreceptor. The third role is to designate the cell as the R7 type rather than the R1/6 photoreceptor type. We speculate why Notch activation has dual and opposite effects on photoreceptor differentiation within the prospective R7 cell, and provide a model for how Notch and RTK signaling combine to specify the distinct fates of the R1/6 and R7 photoreceptors as well as the surrounding non-neuronal cone cells.