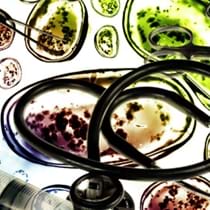 Nearly 100,000 patients die in the United States every year from infections acquired while in the hospital. The high incidence, increased severity, and burgeoning costs of these infections to the health care system have resulted in a growing interest in new vaccines and other preventative measures. Common bacterial pathogens in the clinical setting include Staphylococci, Enterococci, Clostridia, and Pseudomonas. Clinicians also see a high incidence of resistance to antibiotics, pathogenicity islands, and toxins in these settings. In particular, the spread of community-associated, methicillin-resistant Staphylococcus aureus (CA-MRSA) has increased concerns for public safety.

This meeting will focus on current knowledge about vaccines for nosocomial infections, and specifically on the pathogenesis of select nosocomial bacteria. Talks will discuss host immunology, as well as lessons learned from vaccines already in use and those under development.

Centers for Disease Control and Prevention

Dr. McDonald graduated from Northwestern University Medical School in Chicago. He completed his Internal Medicine Residency at Michigan State and an Infectious Diseases Fellowship at the University of South Alabama, following which he completed a fellowship in Medical Microbiology at Duke University. Past positions have included Associate Investigator at the National Health Research Institutes in Taiwan, where he helped develop an island-wide surveillance system for antimicrobial resistance, and Assistant Professor in the Division of Infectious Diseases at the University of Louisville, where he worked as a hospital epidemiologist in infection control. Dr. McDonald is a former officer in the Epidemic Intelligence Service and is currently the Chief of the Prevention and Response Branch in the Division of Healthcare Quality Promotion at the CDC. He is the author or co-author of over 100 peer-reviewed publications, is a Fellow of the American College of Physicians and the Society for Healthcare Epidemiology of America, and a member of the Infectious Diseases Society of America and American Society for Microbiology.

Dr. Johnson is a Professor of Medicine at Loyola University Stritch School of Medicine at Loyola University Medical Center in Maywood, Illinois and the Deputy ACOS for Research at the Hines VA Hospital. Dr. Johnson received his MD degree from the University of Minnesota Medical School and completed his internal medicine residency and infectious disease fellowship training at the University of Minnesota Hospital and the Minneapolis VA Medical Center. He received a Diploma in Tropical Medicine and Hygiene at Mahidol University in Bangkok, Thailand and a Career Development Ward from the Department of Veterans Affairs. He is the past President of the Anaerobe Society of the Americas. His main research interest and focus has involved the epidemiology and pathogenesis of Clostridium difficile infections. He is actively studying variant strains of C. difficile and the role of the various toxins in the pathogenesis of C. difficile disease. He also has been involved in clinical research on the parasite, Angiostrongylus cantonensis, responsible for most cases of eosinophilic meningitis, world-wide.

Dr. Novick is professor of microbiology and medicine at NYU School of Medicine and is widely regarded as the founder of research on the molecular biology of the staphylococci, and as a co-founder of the study of bacterial plasmids, making key discoveries in both areas during his long career. He has authored some 230 original research articles plus 35 reviews and chapters, has edited several books, and has reviewed several others. He has recently been elected to the National Academy of Sciences.

Dr. James Liang is an Associate Professor of Chemistry, Chemical Biology, and Biomedical Engineering Department at Stevens Institute of Technology. Dr. Liang did his graduate study in the area of Chemistry and postdoctoral training on biomedical engineering and controlled drug delivery. Dr. Liang's lab at Stevens Tech is engaging in developing new
technologies for the treatment of biofilm infections.

Dr. Gruber is Senior Vice President of Pfizer Vaccine Clinical Research. He joined in 1999 as Vice President of Clinical Vaccine Research for Wyeth, now a wholly owned subsidiary of Pfizer. Prior to his position at Wyeth, Dr. Gruber was an Associate Professor of Pediatrics in the Division of Pediatric Infectious Diseases, Vanderbilt University School of Medicine. He served as the Director of the Diagnostic Virology Laboratory at Vanderbilt University Hospital. Dr. Gruber is Board Certified in Pediatrics and Pediatric Infectious Diseases. He is a member of the American Academy of Pediatrics, the Society for Pediatric Research, the Infectious Diseases Society of America, and the America Society for Microbiology. Dr. Gruber has served as a consultant reviewer for the National Institutes of Health, NIAID. Dr. Gruber received his bachelor degree in Mathematical Sciences from Rice University, Houston, Texas, and his medical degree from Baylor College of Medicine, Houston, Texas. He received his pediatric and infectious disease training at Baylor College of Medicine, where he also served as Chief Resident in Pediatrics. Dr. Gruber has authored or co-authored more than 100 research articles and book chapters. He is a reviewer for several scientific journals.

Ginamarie Foglia, DO, MPH, FACP is a Director of Clinical Development at Sanofi Pasteur Inc., and a board-certified infectious disease specialist, medical epidemiologist, and associate professor. Dr. Foglia received her doctoral degree from the University of Medicine and Dentistry of New Jersey and her Masters of Public Health from Yale University, and completed an Infectious Disease/Public Health Fellowship at the Centers for Disease Control and Prevention in Georgia. Prior to joining Sanofi Pasteur, Dr. Foglia was the Medical Director of Infectious Disease Consulting and Infection Control at Pocono Medical Center in Pennsylvania. She also served with the United States Army Medical Corps from 2000–2005, attaining the rank of Lieutenant Colonel. During her military service, Dr. Foglia initially worked as Principal Investigator at the Walter Reed Army Institute of Research and Associate Professor at the Uniformed Services University of Health Sciences in Maryland. From 2002–2005 she was based in Kenya, where she led an HIV/AIDS program, jointly sponsored by the National Institutes of Health and the Department of Defense (DoD), conducting vaccine research, international surveillance, and infrastructure development. During this period, she was also appointed as the DoD representative for the Presidential Emergency Plan for AIDS relief in Kenya, and served as advisor to the Kenyan Ministry of Health and the US Embassy. Dr. Foglia has published several manuscripts and has presented at many international conferences.

For sponsorship opportunities please contact Kathy Granger at kGranger@nyas.org or 212.298.8625.

The Epidemiology of Healthcare-Associated Infections: Challenges and Opportunities for Prevention

At least 1.7 million Healthcare-Associated Infections (HAIs), resulting in over 100,000 deaths, occur in U.S. hospitals annually, with additional infections and deaths occurring in non-hospital settings. The majority of recognized HAIs are caused by bacterial pathogens that gain entry into the body following the use of invasive devices and surgical procedures. This presentation will provide an overview of these infections, the pathogens responsible, risk factors for their occurrence, and the settings and patient populations most affected. Special focus will be given to the pathogens and infections seeming most amenable to prevention through vaccination.

Over 95 % of bacteria existing in nature are in biofilms. The solid-liquid interface between body fluids (e.g. blood) and the surfaces of tissues or implanted devices provides an ideal environment for bacterial attachment and colonization. One of the most important features of biofilms is that bacteria protected in the biofilms can evade the clearance by the host defenses and resist to antibiotic treatment. Bacteria living in biofilms can exhibit up to 1,000 times greater resistance to antibiotics than planktonic bacteria. A wide range of human infections is due to biofilms. Biofilm associated nosocomial infections and diseases are currently the fourth leading cause of death in the United States, behind only heart disease, cancer and stroke. In this talk, new approaches to deal with biofilm infections will be discussed.

Lessons from vaccines that have been successfully developed: Pneumococcal polysaccharide CRM197 conjugate vaccines

Pneumococcal polysaccharide CRM197 vaccines have been successfully developed and have dramatically reduced community acquired pneumococcal disease. The clinical research experience with these vaccines can be used to inform thinking about nosocomial vaccine antigens, target populations, regulatory approach, study endpoints, immunologic correlates of protection, and evaluation post licensure. These features may be combined with strategies unique to nosocomial vaccine development to ensure a comprehensive approach.

Antibiotic therapy is a key risk factor for development of symptoms associated with Clostridium difficile infection (CDI) yet CDI is routinely treated with antibiotics. Not surprisingly, there is much interest in the development of non-antibiotic interventions for CDI. This presentation will describe the rationale for a vaccine against CDI, the inherent challenges for developing such vaccines and the vaccination strategies currently being employed. An overview of the lead active vaccine program in this important disease area will be also provided.