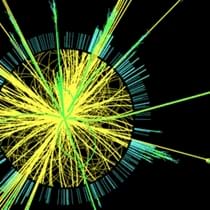 Presented by Science & the City, The ATLAS Experiment, CERN - The European Organization for Nuclear Research, and the the Consulate General of Switzerland in New York, and Papadakis Publisher

ATLAS will learn about the basic forces that have shaped our Universe since the beginning of time and that will determine its fate. Among the possible unknowns are the origin of mass, extra dimensions of space, unification of fundamental forces, and evidence for dark matter candidates in the Universe.

Voyage to the Heart of Matter, is a pop-up book that Sanders has authored with pop-up engineer and illustrator Anton Radevsky about the science of CERN's Large Hadron Collider, focusing on the ATLAS experiment. In this unique collaboration, 7,000 tons of metal, glass, plastic, cables, and computer chips leap from the page in miniature pop-up, to tell the story of CERN’s quest to understand the birth of the universe.

This event is presented with the support of the Consulate General of Switzerland. Deputy Consul General Sabine Ulmann Shaban, representing the home country of the Large Hadron Collider, will make opening remarks.

A reception and booksigning will follow, where both CERN's Voyage to the Heart of Matter and Dr. Randall's Warped Passages will be available for purchase.

After the event, find Voyage to the Heart of Matter for sale online or at these Manhattan and Brooklyn bookstores: Bookcourt, Crawford Doyle, Greenlight Bookstore, Rizzoli, Barnes& Noble, and Archivia Books.

Alan Alda is an internationally recognized actor, writer, and director who has won six EMMY awards and been nominated for many more EMMY's, as well as the Oscar and Tony awards. His memoirs, "Never Have Your Dog Stuffed, and Other Things I’ve Learned," and “Things I Overheard While Talking to Myself," were both New York Times bestsellers.

Mr. Alda is a great supporter of communicating science to the public. He has been awarded the National Science Board’s Public Service Award, and has been inducted into the American Academy of Arts and Sciences. On Broadway, he has appeared as the physicist Richard Feynman in the play "QED." And on television, he hosted the award winning PBS series "Scientific American Frontiers" for eleven years, interviewing leading scientists from around the world. A new three-part science series entitled “The Human Spark” is currently running on PBS.

Lisa Randall is Frank B. Baird, Jr. Professor of Science at Harvard University. She is a professor of theoretical physics and studies particle physics and cosmology. Her research concerns elementary particles and fundamental forces and has involved the development and study of a wide variety of models, the most recent involving extra dimensions of space. She has made advances in understanding and testing the Standard Model of particle physics, supersymmetry, models of extra dimensions, resolutions to the hierarchy problem concerning the weakness of gravity and experimental tests of these ideas, cosmology of extra dimensions, baryogenesis, cosmological inflation, and dark matter.

Professor Randall earned her PhD from Harvard University and held professorships at MIT and Princeton University before returning to Harvard in 2001. She is a member of the National Academy of Sciences, the American Academy of Arts and Sciences, a fellow of the American Physical Society, and is a past winner of an Alfred P. Sloan Foundation Research Fellowship, a National Science Foundation Young Investigator Award, a DOE Outstanding Junior Investigator Award, and the Westinghouse Science Talent Search. In 2003, she received the Premio Caterina Tomassoni e Felice Pietro Chisesi Award, from the University of Rome, La Sapienza. In autumn, 2004, she was the most cited theoretical physicist of the previous five years. In 2006, she received the Klopsted Award from the American Society of Physics Teachers (AAPT). In 2007, she received the Julius Lilienfeld Prize from the American Physical Society for her work on elementary particle physics and cosmology and for communicating this work to the public. Professor Randall’s book Warped Passages: Unraveling the Mysteries of the Universe's Hidden Dimensions was included in the New York Times' 100 notable books of 2005.

In 2008, Prof. Randall was among Esquire Magazine's "75 Most Influential People of the 21st Century". She was included in Time Magazine's "100 Most Influential People" of 2007 and was one of 40 people featured in The Rolling Stone 40th Anniversary issue that year. Prof. Randall was featured in Newsweek's "Who's Next in 2006" as "one of the most promising theoretical physicists of her generation" and in Seed Magazine's "2005 Year in Science Icons".

Michael Tuts is an experimental particle physicist on the faculty of Columbia University since 1983. He is currently the Operations Program manager for the 44 US institutions that make up one fifth of the ATLAS collaboration at the Large Hadron Collider (LHC) at the CERN Laboratory in Geneva, Switzerland. Since the mid-1970s, he has carried out numerous experiments at accelerators, with ever increasing energies, focused on understanding the fundamental forces and particles from which all matter is made. Now that the ATLAS experiment is taking data, he is eagerly awaiting the first look at the world's highest energy collisions.

Emma Sanders is a science writer in CERN’s education and outreach team, and developer of the Laboratory’s Microcosm exhibition centre. She is coauthor of Voyage to the Heart of Matter, a pop-up book about the science of CERN's Large Hadron Collider, focusing on the ATLAS experiment. A radio astronomer by training, Emma has worked in science communication for the last 16 years, helping set up the first National science weeks in the UK, working as a science journalist at BBC World Service and at CERN where she ran the laboratory’s exhibitions team for 10 years.