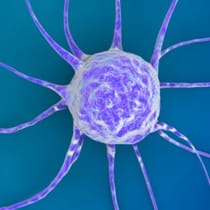 The Hedgehog Pathway in Cancer

Presented by the Cancer and Signaling Discussion Group and the Dr. Paul Janssen Memorial Series

The Hedgehog (Hh) signaling pathway regulates processes that are essential for the proper development of an embryo. Although this pathway plays a limited role in adult tissues, a growing body of evidence has indicated that the pathway can become reactivated in specific types of cancers through sporadic mutations or other mechanisms. Blockade of this pathway may represent a novel therapeutic approach to the treatment of such cancers and preliminary findings in basal cell carcinoma patients treated with inhibitors of this pathway have begun to provide clinical proof of concept. We will review the role of Hh signaling in disease pathogenesis and discuss potential therapeutic opportunities for targeting this pathway.

Julian Adams, Ph.D., is President of Research and Development and Chief Scientific Officer. Prior to joining Infinity, Dr. Adams was the Senior Vice President, Drug Discovery and Development at Millennium Pharmaceuticals. In this capacity, he had global responsibility for multiple drug discovery programs, including the successful discovery and development of VELCADE®, a proteasome inhibitor for cancer therapy. He joined Millennium through its acquisition of LeukoSite in 1999 where he was Senior Vice President, Research and Development. Dr. Adams joined LeukoSite as a result of its acquisition of ProScript, Inc., where he had served as a member of the founding management team, Executive Vice President of Research and Development, and a member of the Board of Directors. Earlier in his career, Dr. Adams served in various positions, including Director, Medicinal Chemistry at Boehringer Ingelheim, where he successfully discovered the drug Viramune® for HIV. Also, from 1982-1987, he was a Medicinal Chemist at Merck. Dr. Adams received a B.S. from McGill University and a Ph.D. from the Massachusetts Institute of Technology in the field of synthetic organic chemistry. He has received many awards, including the 2001 Ribbon of Hope Award for VELCADE® from the International Myeloma Foundation. Dr. Adams is an inventor of over 40 patents and has authored over 100 papers and book chapters in peer-reviewed journals. He is the editor of Proteasome Inhibition in Cancer Therapy published in July 2004.

Andrew P. McMahon completed his Ph.D. at University College London, in the UK in 1981. He worked for three years as a Postdoctoral Fellow at the California Institute of Technology before returning to the UK in 1984 to take on the position of Staff Scientist at the National Institute for Medical Research in London. In 1988, he joined Roche Institute for Molecular Biology in New Jersey, and was later appointed Head of the Department of Cell and Developmental Biology in the same institute in 1991. He moved to assume a Professorship at Harvard University in 1993, and was appointed Frank B. Baird, Jr. Professor of Science in 1999. He also served as Chairman of the Department of Molecular and Cell Biology of Harvard University from 2001 to 2004. Professor McMahon is currently a member of the Department of Stem Cell and Regenerative Biology and the Department of Molecular and Cellular Biology, and a principle investigator within the Harvard Stem Cell Institute. Dr. McMahon is an elected Fellow of the American Association for the Advancement of Science (2000), the American Academy of Arts and Sciences (2003), and the Royal Society, UK (2007), as well as an elected Associate Member of the European Molecular Biology Organization (2003). He has also served as an editor of the journals Development and Developmental Biology, and served on the editorial boards of several other scientific journals, including Genes and Development and Current Biology, His group is interested in understanding the mechanisms that generate complex structures in the developing mammalian embryo, focusing on the mammalian kidney, neural tube and limb skeleton and the mechanisms of repair and regeneration that ensure their normal function in adult life.

Kenneth Olive is an Assistant Professor of Pathology and Medicine and the Columbia University Herbert Irving Comprehensive Cancer Center. Prior to joining Columbia, Dr. Olive performed his postdoctoral studies at the University of Pennsylvania and the University of Cambridge. While there, he established a preclinical therapeutics testing facility to utilize advanced genetically engineered mouse models of pancreatic cancer for assessing therapeutics. Prior to this, Dr. Olive received a B.S. in Biology from Bucknell University in 1998 and a Ph.D. in Biology from MIT in 2005. While at MIT, he used a knock-in model of Li-Fraumeni Syndrome to support the p53 “gain-of-function” hypothesis and collaborated on the development of a mouse model of advanced lung adenocarcinoma. His laboratory now studies the response of pancreatic tumors to therapeutic intervention using mouse models of pancreatic cancer.

I received a B.S. from Rutgers University and a Ph.D. in Immunology from Northwestern University in 1995. Following a post-doctoral fellowship at Harvard University / Dana-Farber Cancer Center (1995-1999), I joined SUGEN, Inc. (1999-2003) working on the discovery and validation of novel protein kinases. I subsequently joined Genentech in 2004 and formed a laboratory focused on the development of predictive classifiers of therapeutic activity for new cutting-edge drug candidates that are under development at Genentech. Our laboratory utilizes molecular and proteomic technologies, in combination with pre-clinical model systems, to generate and test a diagnostic hypothesis for each molecule, determine marker prevalence in a given indication, and evaluate the utility of such markers in a clinical setting. Combined, these approaches not only facilitate the design of clinical trials, but ensure that we are on track to enrich for the right patient population, as well as uncovering exciting insights into the biology of cancer pathways. My recent focus has been on the development of inhibitors of the Hedgehog signaling pathway in cancer.

The Hedgehog signaling pathway plays a central role in generation and maintenance of wide-variety of body structures. Deregulated Hedgehog signaling is thought to underlie, or support, a number of cancers. A key component in the signal transduction pathway is Smoothened. Smoothened encodes a seven-pass membrane protein whose activity is essential for all ligand-based signaling. Activating mutations within Smoothened are directly linked to Hedgehog-dependent cancers. Interestingly, Smoothened action is associated with a specific cell organelle, the primary cilium. In broad screens for drugs that inhibit Hedgehog action, Smoothened has emerged as a particular target of interest. I will discuss recent studies addressing the trafficking processes that regulate Smoothened action. In addition, I will review our efforts utilizing a novel, high content screen to mechanistically dissect this process, and to develop new opportunities for pharmacological intervention in Hedgehog signaling.

Ductal pancreatic tumors are unusually resistant to chemotherapy, exhibiting primary resistance to each of the numerous regimens tested to date. These tumors are also unusually desmoplastic and harbor a sparse and inefficient vasculature. The resulting lack of perfusion appears to play a role in the inefficient delivery of numerous chemotherapeutic agents to the parenchyma of pancreatic tumors. The sonic hedgehog pathway has been implicated in promoting desmoplasia through a paracrine signaling mechanism active in pancreatic tumors of both humans and the Kras/p53/PdxCre (KPC) mouse model. Using an inhibitor of the Smoothened protein, we found that stromal contribution to KPC pancreatic tumors was markedly diminished within 10 days of inhibition of the Hh pathway. Paradoxically, the depletion of stromal cells was coincident with an increase in microvessel density, despite previous data indicating a pro-angiogenic role for the Hh pathway. These non-cell autonomous changes resulted in an increase in the delivery of small molecules to KPC pancreatic tumors and an increase in apoptosis when administered in combination with gemcitabine. Ultimately, mice treated with both IPI-926 and gemcitabine had a significant extension of survival and a decrease in the incidence of liver metastases. We conclude that the Hh pathway plays an important role in the maintenance of pancreatic tumor stroma and that this contributes to the primary chemoresistance of pancreatic tumors.

Smoothened can promote the growth of certain cancers via three modes of malignant activation: ligand-dependent signaling between tumor cells or between tumor cells and their microenvironment, and ligand-independent signaling caused by mutations in Ptc or Smo. IPI-926 is a potent, semisynthetic Smo inhibitor derived from a natural product, currently in a Phase 1 clinical trial. In BCC and medulloblastoma models with activating Ptc mutations, IPI-926 leads to tumor regression. IPI-926 also has activity in models where tumor cells produce Hh ligand that results in paracrine signaling to the stromal microenvironment. IPI-926 inhibits Smo in the stromal cells, resulting in reduced growth of pancreatic xenografts. Studies in a Kras, p53 model of pancreatic cancer demonstrated that IPI-926 decreased the desmoplastic stroma and enabled chemotherapy to access the tumor cells, leading to decreased incidence of tumor metastases and an increase in median survival. In chemoresponsive tumor models, the Hh pathway plays a significant role after tumor reduction by chemotherapy, as observed in lung and ovarian cancer models. Following chemotherapy, Hh ligand is upregulated in the tumor leading to an increase in signaling to the stroma; IPI-926 inhibits this signaling and prolongs the time to tumor relapse. Up-regulation of ligand is also observed following targeted therapy. NSCLC tumor cells treated with the EGFR inhibitor gefitinib increased Hh ligand expression. In NSCLC models, IPI-926 inhibits regrowth of tumors post-gefitinib treatment, delaying time to tumor relapse. These data suggest that Hh pathway inhibition could be an important strategy to extend progression free survival in patients who initially respond to therapy but later relapse.

Targeting the Hedgehog Pathway in Cancer: From Bench to Bedside

The Hedgehog (Hh) signaling pathway has been directly implicated in the pathogenesis of human basal cell carcinoma (BCC) and a subset of medulloblastoma; most often caused by underlying loss-of-function mutations in the gene encoding the inhibitory receptor Patched1 (PTCH1). The novel Hedgehog pathway inhibitor, GDC-0449, targets the G protein coupled-like receptor Smoothened (SMO). In early stage clinical studies, administration of GDC-0449 to patients with advanced BCC has produced promising results, highlighted by a 55% overall response rate. Results of these early phase clinical studies will be discussed, including molecular analyses of tumor specimens obtained from patients that have provided valuable insight regarding drug activity and acquired resistance. In addition, opportunities for the clinical development of GDC-0449 in cancers without Hh pathway mutations will be discussed.