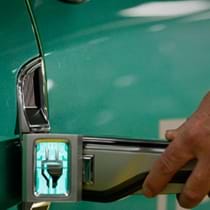 The Road to Widespread Adoption of Electric Vehicles

Electric vehicles can reduce greenhouse gas emissions by 50% to 75% compared with conventional gasoline-powered cars. Several automakers including GM and Toyota plan to roll out plug-in hybrid electric vehicles in the next two years while Nissan has announced the availability of full battery electric vehicles in late 2010. Widespread market penetration of electric vehicles and battery dominant hybrids requires addressing issues that include availability of recharging stations, capacity of the electric grid and consumer understanding and acceptance of the new technology. Just how is this accomplished in a dense urban environment? This panel discussion will explore these practical issues for electric vehicle introduction in New York City.

Office of Long-term Planning and Sustainability

Britta K. Gross is Director, Global Energy Systems and Infrastructure Commercialization within GM R&D and Strategic Planning. In this role she is responsible for assessing energy system alternatives and steering the commercialization efforts for new infrastructures required to support GM’s biofuel, battery-electric and hydrogen fuel cell electric vehicle programs. Britta has an extensive and diverse background in Automotive and Aerospace industries. She received a degree in Electrical Engineering from Louisiana State University in Baton Rouge, Louisiana and studied language arts at the University of Wurzburg in Germany. She serves on the Board of Directors of the National Hydrogen Association.

Office of Long-term Planning and Sustainability

Neal J. Parikh is a Senior Policy Advisor with Mayor Michael R. Bloomberg’s Office of Long-Term Planning and Sustainability, which is responsible for implementing New York City’s comprehensive sustainability plan (“PlaNYC”) and supporting other sustainability efforts in the City. In this capacity, Neal leads the office’s transportation, federal infrastructure, and energy efficiency financing initiatives. He recently led a market research study to identify what factors would drive early consumers to purchase electric vehicles in New York City, and what the City and other stakeholders could do to facilitate early adoption of this technology in the coming years. Mr. Parikh also serves as a board member for Building America’s Future, a bipartisan coalition of elected officials that Mayor Bloomberg founded with Governors Arnold Schwarzenegger and Edward Rendell in 2008 to bring about a new era of U.S. investment in infrastructure. Before joining the Bloomberg Administration, Mr. Parikh was an Associate Director of Infrastructure at the Millennium Challenge Corporation, a U.S. government corporation that seeks to reduce global poverty through the promotion of sustainable economic growth. He has also worked on transportation finance and reform as a Congressional staffer and analyzed social welfare and labor policies as a research analyst at the Urban Institute. Neal holds an undergraduate degree from Brown University and a Master’s in Public Policy and Urban Planning from Harvard University.

Bruce Schaller is Deputy Commissioner for Planning and Sustainability at the New York City Department of Transportation. He oversees agency planning, design and implementation of the transportation elements in Mayor Bloomberg's PlaNYC sustainability plan for 2030, and key elements of DOT’s Sustainable Streets Strategic Plan. The division’s responsibilities include development and implementation of bus, parking, curbside management, congestion mitigation, public space, street design, urban art, freight mobility and clean fuel initiatives. These include publication and implementation of the agency’s new Street Design Manual, which promotes designs and materials to make streets safer, last longer, and work better for all users; development of bus rapid transit, including the recently implemented Fordham Road Select Bus Service (SBS); a series of pilots for peak-rate parking pricing; implementation of clean fuel initiatives and publication of the Department’s annual Sustainable Streets Index. Mr. Schaller previously worked for MTA New York City Transit, several New York City agencies and as an independent consultant on transportation policy issues. He has a Masters in Public Policy from the University of California at Berkeley and a BA from Oberlin College.

Mike Ligett has led Progress Energy’s electric transportation program since its inception in 2006. Progress Energy is an extensive supporter of electric transportation through research grants, policy dialogue, public education programs and direct fleet investment. In recent years Progress Energy has funded a national plug-in hybrid school bus development program, developed a fleet of plug-in hybrid electric cars and trucks, led regional educational initiatives and researched the utility impacts and environmental impacts of electric transportation. Prior to joining Progress Energy Mr. Ligett gained 30 years of experience in a variety of industries including stints as General Manager of a packaging machinery manufacturing company, Vice President of an international trade business in Eastern Europe and founder of an internet services business. Mr. Ligett is a graduate of Michigan State University and the Rutgers Graduate School of Business Administration. He currently serves on the Board of the Electric Drive Transportation Association, the Advisory Board of the Advanced Transportation Energy Center at NC State University and participates actively in the Electric Power Research Institute electric vehicle development programs. Today he will discuss the impact of electric transportation on utilities.