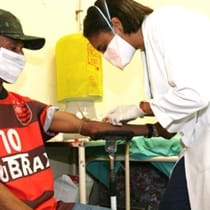 Tuberculosis: Novel Therapies through Knowledge of the Genetics of the Causative Agent

Tuberculosis kills close to two million people each year and infecting strains of Mycobacterium tuberculosis resistant to standard regimens are increasingly more prevalent. There is a clear need for new TB drugs and for new drug discovery paradigms. It has been more than 10 years since the sequence of M. tuberculosis genome was published. The accumulated knowledge from the intervening years, together with recent use of innovative genetic techniques, has shifted the emphasis in TB drug discovery from empirical approaches to hypothesis-driven processes. These new processes can accelerate identification and validation of pharmaceutical targets, unveil resistance mechanisms, and present new compound screening strategies and drug development pathways. This symposium will highlight recent advances in these areas as well as deeper insights into the pathophysiology of the disease that has been enabled by genetic tools.

Dr. Helena I.M. Boshoff received both her BSc and MSc degrees in biochemistry at the University of Pretoria in South Africa. She continued graduate studies at the University of Witwatersrand, also in South Africa, where she received a PhD in molecular biology in 2000. She then conducted research on tuberculosis as a postdoctoral fellow in the Tuberculosis Research Section of the Laboratory of Clinical Infectious Diseases at the National Institute of Allergy and Infectious Diseases at the NIH in 2001–2005. From 2006–2008, she was a research fellow in the Tuberculosis Research Section. Since 2008, she has been a staff scientist in the Tuberculosis Research Section, of which Clifton E. Barry III is chair, where she leads the biology section of the lab. The Tuberculosis Research Section is a multidisciplinary group of research scientists comprised of biologists, chemists, and clinical researchers who focus on understanding the scientific issues that facilitate the development of drugs that will improve chemotherapy of tuberculosis globally. Dr. Boshoff’s research interests include the identification and validation of drug targets in Mycobacterium tuberculosis, the etiologic agent of the disease, as well as mechanisms that give rise to drug resistance in this pathogen. Dr. Boshoff is the co-author of numerous articles in peer-reviewed publications and serves on the editorial board of the journals “Tuberculosis” and “Drugs of the Future”.

William Jacobs, by initiating work with mycobacteriophages, has developed novel genetic approaches to make mutations and transfer genes in Mycobacterium tuberculosis. With these tools, he has identified drug targets and novel virulence factors of M. tuberculosis, many of which are enzymes or products of complex lipid metabolism. These complex lipids are unique among bacterial pathogens and likely to contribute significantly to the pathogenic property of mycobacteria. His lab uses this knowledge to develop novel chemotherapies, vaccines, and diagnostic tests to treat tuberculosis.

Carl Nathan, MD is R.A. Rees Pritchett Professor and chairman of the Department of Microbiology and Immunology at Weill Cornell Medical College and co-chair of the Program in Immunology and Microbial Pathogenesis at Weill Graduate School of Medical Sciences of Cornell University. After graduation from Harvard College and Harvard Medical School, he trained in internal medicine and oncology at Massachusetts General Hospital, the National Cancer Institute and Yale before joining the faculty of The Rockefeller University from 1977-1986. He has been at Weill Cornell Medical College since 1986, where he has served as founding director of the Tri-Institutional MD-PhD Program, senior associate dean for research and acting dean. A member of the Institute of Medicine of the National Academies of Sciences and a Fellow of the American Academy of Microbiology, Nathan serves as associate scientific director of the Cancer Research Institute, a Trustee of the Hospital for Special Surgery, and since 1988, an editor of the Journal of Experimental Medicine. He received the Robert Koch Prize in 2009 for his work on host defense against infection.

Over four decades Nathan established that lymphocyte products activate macrophages, that interferon-gamma is a major macrophage activating factor in mice and humans, and that mechanisms of macrophage antimicrobial activity include induction of the respiratory burst and inducible nitric oxide synthase (iNOS). Although iNOS helps the host control Mycobacterium tuberculosis, Mtb resists sterilization by host immunity. The biochemical basis of Mtb’s persistence is the lab’s present focus. Genetic and chemical screens have identified enzymes that Mtb requires to survive during non-replicative persistence, including the proteasome, a serine protease that controls intrabacterial pH, and components of pyruvate dehydrogenase and nucleotide excision repair, along with inhibitors of each.

Christopher Sassetti, PhD, is an Assistant professor of Molecular Genetics and Microbiology and the University of Massachusetts Medical School and an Early Career Scientist of the Howard Hughes Medical Institute. After receiving his PhD in Immunology from the University of California San Francisco, he pursued his postdoctoral training in bacterial genetics at the Harvard School of Public Health. He joined the faculty at the University of Massachusetts in 2004. Dr. Sassetti’s research focuses on the application of high-throughput genetic approaches to understand the how Mycobacterium tuberculosis adapts to the host environment.

Dirk Schnappinger received his PhD from the Friedrich-Alexander University of Erlangen-Nürnberg, Germany in 1998. After his graduate work on protein engineering, Dr. Schnappinger began to study the human pathogen Mycobacterium tuberculosis, first at the University of California Berkeley and then at Stanford University. In 2001 he founded his own research group at the Weill Cornell Medical College. His work focuses on the development of genetic tools and the analysis of essential genes of M. tuberculosis.

Novel drugs are needed to kill M. tuberculosis cells, particularly strains that are multi-drug resistant or extensively drug resistant. Genetics - transformation, complementation, and allelic exchanges - have been indispensable in providing the knowledge of Tuberculosis drug targets and their mechanisms of action. Transposon screens which look for the absence of insertions in saturated libraries have revealed numerous new drug target candidate genes and provide a way to validate the essentiality of drug target genes. Using a suppressor genetic approach, we have elucidated a previously unknown trehalose to glucan pathway. A reverse chemical genetics approach, we have developed a conditional system of inactivation of two different enzymes of this pathway and demonstrated that these inactivations leads to rapid death of M. tuberculosis cells both in vitro and in mice. These pathways provide novel targets for further drug development. Lastly, the combining of various deletion mutations in different glucan pathways, have allowed for the discovery of novel synthetic lethal combinations which thereby define novel drug targets sets. In summary, target essentiality validation, suppressor genetics, reverse chemical genetics, and synthetic lethal screens provide a new model for identifying novel ways to kill M. tuberculosis cells.

The ability of Mycobacterium tuberculosis to survive in the host and cause disease requires the bacterium to adapt to a number of potentially hostile microenvironments. By defining the biochemical pathways that are critical for bacterial survival in each of these niches we are learning how the bacterium responds to the many different host pressures encountered as infection proceeds, including nutritional availability, oxidation state, and antimicrobial effectors. The outcome of these interactions determines the growth rate of the bacterium, its susceptibility to antibiotics, and the ultimate outcome of disease.

Treatment and prevention of tuberculosis (TB) depend almost entirely on chemotherapy, which is generally effective but requires a long treatment period. New drugs are needed to develop therapies that cure active TB, drug resistant TB and latent TB in a short period of time. Development of such drugs has been hampered by the lack of validated targets. This presentation will discuss genetic approaches to silence gene activities in Mycobacterium tuberculosis during growth in vitro and during infections and the use of these approaches to validate new drug targets.

High-throughput Screening to Accelerate the Process of Drug Discovery

Traditional target-based high-throughput screening programs have failed to yield promising leads for tubercular drug development despite many initial successes in the identification of potent enzyme inhibitors in these assays. In contrast, whole cell screening assays identifies compounds that inhibit bacterial growth indicating that the target is essential for growth or survival. In an effort to identify new drug targets in Mycobacterium tuberculosis, we have employed high-throughput screening under metabolically relevant growth conditions in order to explore the limits of target vulnerability and to identify potentially novel pathways for drug development. The successes from these screens and the attempts at drug target identification in this program will be discussed.

Toward Chemotherapy of Infectious Disease Guided by Host-Pathogen Interactions

Mycobacterium tuberculosis (Mtb) resists sterilization by host immunity. The biochemical basis of Mtb's persistence is the lab's present focus. Genetic and chemical screens have identified enzymes that Mtb requires to survive during non-replicative persistence, including the proteasome, a serine protease that controls intrabacterial pH, and components of pyruvate dehydrogenase and nucleotide excision repair, along with inhibitors of each.