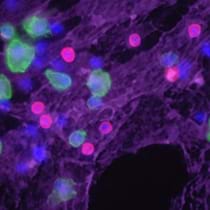 Over the years, a plethora of different therapeutic approaches have been discovered and developed in an effort to treat patients with the most severe forms of cardiovascular diseases, including critical limb ischemia (CLI) and chronic heart failure. These approaches have ranged from small molecules, biologics, devices, gene therapy (using growth factors such as HIF, VEGF, FGF), and, more recently, cell therapy. While some of these therapeutic approaches are effective at first, these chronic diseases progress with time until there are no more viable therapeutic options. Very limited surgical options are frequently the last resort, either heart transplantation or a left ventricular assist device placement in the case of chronic heart failure or limb amputation in the case of CLI. The objective of today's current standard of care is to halt or delay disease progression. In contrast, regenerative medicine therapies strive to rebuild and restore the structure and function of the damaged or diseased tissues. An increasingly studied regenerative medicine approach is to use adult stem cells to repopulate and promote the healing process in damaged or diseased tissues. Cell therapy can now be derived from a variety of sources, from embryos and placentas to different types of adult tissues. The most widely studied and most advanced type of cell therapy now in clinical trials utilizes cells derived from bone marrow. Bone marrow derived stem cells, either used immediately or cultured to significantly expand the essential cell populations, have been studied in a variety of chronic cardiovascular diseases with promising results in clinical trials. Various autologous or allogeneic adult stem cell therapies are about to be evaluated in pivotal, randomized Phase III trials, underscoring the potential clinical benefit of this approach. The objective of this symposium is to provide a review of recent advances in the field, and to show how this work is translating into new approaches to treat difficult-to-treat, chronic cardiovascular diseases, ranging from compelling preclinical data to mid-stage clinical trial results.

Mr. Mayleben joined Aastrom as a member of the Company's Board of Directors in June 2005, and has served as Chief Executive Officer, President, and Director since December 2009. Mr. Mayleben was formerly an advisor to life science and healthcare companies through his advisory and investment firm, ElMa Advisors. Prior to this he served as the President and Chief Operating Officer and a Director of NightHawk Radiology Holdings, Inc. Mr. Mayleben was also formerly the Chief Operating Officer of Esperion Therapeutics, which later became a division of Pfizer Global Research & Development. He joined Esperion in late 1998 as Chief Financial Officer. While at Esperion, Mr. Mayleben led the raising of more than $200 million in venture capital and institutional equity funding and later negotiated the acquisition of Esperion by Pfizer in December 2003. Prior to joining Esperion, Mr. Mayleben held various senior and executive management positions at Transom Technologies, Inc., now part of Electronic Data Systems, Inc., and Applied Intelligent Systems, Inc., which was acquired by Electro-Scientific Industries, Inc. in 1997. Mr. Mayleben holds a Masters of Business Administration, with distinction, from the J.L. Kellogg Graduate School of Management at Northwestern University, and a Bachelor of Business Administration degree from the University of Michigan Ross School of Business. He is on the Advisory Board for the Wolverine Venture Fund and serves as a director for several private life science companies.

George B. Zavoico, PhD, is Managing Director, Research, and a Senior Equity Research Analyst at MLV, a boutique investment bank and institutional broker-dealer based in New York. He has over 6 years of experience as a life sciences analyst writing research on publicly traded equities. Prior to MLV, he was an equity analyst with Westport Capital Markets and Cantor Fitzgerald. Prior to working as an analyst, Dr. Zavoico established his own consulting company serving the biotech and pharmaceutical industries by providing competitive intelligence and marketing research, due diligence services, and guidance in regulatory affairs. He also wrote extensively on healthcare and the biotech and pharmaceutical industries for periodicals targeting the general public and industry executives. Dr. Zavoico began his career as a Senior Research Scientist at Bristol-Myers Squibb Co., moving on to management positions at Alexion Pharmaceuticals, Inc. and T Cell Sciences, Inc. (now Celldex Therapeutics, Inc.). He has a BS in Biology from St. Lawrence University and PhD in Physiology from the University of Virginia and has held post-doctoral positions at the University of Connecticut Health Sciences Center and Brigham and Women's Hospital and Harvard Medical School.

Ronnda joined Aastrom in 2006 and is responsible for research, development and manufacturing and engineering operations. She has more than 20 years of research and product development experience and most recently was executive director, biological research at MicroIslet and vice president, scientific development at StemCells Inc. Earlier in her career, she was senior principal scientist, cell biology at Advanced Tissue Sciences and was involved in the development and approval of some of the first cell-based products approved by the FDA. She has also worked as senior director, science and technology at SRS Capital, LLC evaluating life science investments and has held positions in clinical development, drug delivery, business development and manufacturing. Ronnda holds a PhD in biochemistry from the University of Kansas, has completed postdoctoral work at the University of Michigan and received a BA in chemistry and biology from Tabor College.

Arnold I. Caplan, Professor of Biology and Director of the Skeletal Research Center at Case Western Reserve University. He received his PhD from The Johns Hopkins University School of Medicine. Dr. Caplan is a national and international scholar focusing on experimentation in the area of musculoskeletal and skin development. He has published over 375 papers and manuscripts and has long been supported by the NIH and other non-profit and for-profit agencies for his efforts in trying to understand the development, maturation and aging of cartilage, bone, skin and other mesenchymal tissues and for his pioneering research on Mesenchymal Stem Cells.

Dr. Messina has longstanding NIH grant funding to investigate the role of eNOS in collateral artery enlargement as well as the role of bone marrow-derived stem cells on the revascularization of the ischemic limb. He has over 130 peer-reviewed publications, and has been supervisor to more than 20 post-doctoral researchers. He has co-authored over 80 book chapters and five books. He is the Associate Editor of the Journal of Vascular Surgery and the Associate Editor of Rutherford's Vascular Surgery, each the leading publication in its field.

Dr. Iraklis Pipinos is a Professor of Surgery at the University of Nebraska Medical Center. Dr. Pipinos concentrates his clinical practice in vascular surgery at the VA Nebraska and Western Iowa where he is the Chief of the Vascular Surgery section. Dr. Pipinos' clinical efforts focus on open and endovascular surgery, with a particular interest on carotid and peripheral arterial operations. The major focus of the laboratory of Dr. Pipinos and his collaborator Dr. Casale is the development of regenerative medicine strategies for skeletal muscle tissue in the legs of patients suffering from peripheral arterial disease (PAD). PAD afflicts 5% of the US population older than 55 years of age and develops along with hardening (atherosclerosis) of the arteries of the legs. The laboratory of Drs. Pipinos and Casale is funded by the NIH (NIA and NHLBI) and evaluates the mechanisms that produce the clinical manifestations of PAD. The objective of the work performed in the laboratory is to improve patient prognosis and produce significant new diagnostic and treatment strategies for the care of patients with PAD.

Sharon Watling joined Aastrom in February 2010 and is responsible for clinical development, clinical operations and regulatory affairs. Dr. Watling has over 12 years of experience in clinical development, with an emphasis on translational and early stage development, as well as development of clinical strategies. Her industry career started in late stage development within Warner-Lambert/Parke Davis and evolved while at Pfizer to include an early clinical leadership role in cardiovascular-metabolic diseases. Following Pfizer, she was Site Leader and Senior Director, Clinical Development at Metabasis, Inc. Most recently, she served as the Research and Development Strategy Leader at Cognigen Corporation, working with multiple companies to incorporate modeling and simulation practices into their development strategies. Prior to industry, she was an intensive care unit clinical specialist at various academic institutions. Dr. Watling received a Doctor of Pharmacy Degree from the University of Michigan College of Pharmacy.

Marrow derived adult Mesenchymal Stem Cells (MSCs) can be isolated and culture expanded. Although these cells are capable of differentiating into lineages that result in the fabrication of bone, cartilage, muscle, marrow stroma, tendon/ligament, fat and other connective tissues, MSCs have recently been shown to be intrinsically therapeutic. Such culture expanded adult/MSCs are immuno-modulatory especially in muting T-cells and, thus, allogeneic MSCs have been used to mute or cure graft-versus-host-disease and Crohn's disease and are now being tested in certain autoimmune diseases. Furthermore, these allo-MSCs set-up a regenerative micro-environment which is anti-apoptotic, anti-scarring, mitotic for tissue intrinsic progenitors and angiogenic. These immuno and trophic activities result from the secretion of powerful bioactive molecules that, in combination, support localized regenerative event. The MSCs reside in every tissue of the body and function as perivascular cells (pericytes) until a focal injury occurs. At sites of injury the pericyte is released and functions as a MSC that provides molecular assistance in activities leading to tissue regeneration. Such assistance involves many tasks involving the immuno-protection and trophic activities provided by the MSCs.

In recent years, an increasing number of studies have demonstrated that a myopathy is present, contributes, and, to a certain extent, determines the pathogenesis of peripheral arterial occlusive disease. These works provide evidence that a state of repetitive cycles of exercise induced ischemia followed by reperfusion at rest operates in patients with peripheral arterial occlusive disease and mediates a large number of structural and metabolic changes in the muscle, resulting in reduced strength and function. The key players in this process appear to be defective mitochondria that, through multilevel failure in their roles as energy, oxygen radical species, and apoptosis regulators, produce and sustain a progressive decline in muscle performance. In this talk, the currently available evidence that characterize the nature and mechanisms responsible for this myopathy is highlighted. Furthermore, accumulating evidence that oxidative stress (related to ischemia reperfusion) and inflammation are probably critical operating mechanisms in the pathophysiology of the myopathy will be presented. Learning more about these mechanisms will enhance our understanding of the degree to which they are preventable and treatable.