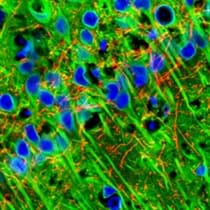 Protein misfolding is a characteristic of several neurodegenerative diseases including the prion encephalopathies, Alzheimer's disease (AD), Parkinson's disease (PD), Multiple System Atrophy (MSA), Huntington's disease (HD), and amyotrophic lateral sclerosis (ALS).  While the transmission of alterations in protein conformation has long been recognized as being central to the prion diseases, evidence has recently emerged to suggest that the alpha-synuclein pathology characteristic of PD can be transmitted from host to graft in cases of PD patients with embryonic nigral transplants. Transmission of alpha synuclein pathology is also characteristic of MSA where alpha-synuclein aggregates are found in oligodendrocytes, a cell type that does not express alpha synuclein.   Non-autonomous, pathological cell-cell interactions are characteristic of mutant SOD-1 expressing animal models of ALS and mutant huntingtin expressing animal models of HD.  Finally, reports that prion protein mediates the Abeta toxicity underlying AD suggests that a pathological synergy may occur among these aggregation prone proteins. This symposium will review recent discoveries that suggest that non-autonomous disease propagation is characteristic of the major protein misfolding diseases, and will review the implications of these findings for the development of disease therapies.

Ron R. Kopito received his A.B. from Bowdoin College in 1976 and his Ph.D. from the Massachusetts Institute of Technology (MIT) in 1982. He was a Postdoctoral Fellow with Harvey Lodish at the Whitehead Institute at MIT from 1982-1987. Since 1987 he has been on the faculty of Stanford University where a Professor in the Department of Biology is currently. His is a recipient of many awards, including appointments as a Lucille P. Markey Scholar (1985-1991) a Presidential Young Investigator (1989-1994) an Established Investigator of the American Heart Association. He has served or is serving on the editorial boards of the Journal of Biological Chemistry, the Journal of Cell Sciences, the Journal of Membrane Biology and Autophagy. Research in Professor Kopito’s lab is focused on understanding the cellular ‘quality control’ mechanisms that monitor protein folding and assembly in mammalian cells, and the role of these processes in the prevention of human disease.

Eliezer Masliah received his Medical Doctor Degree from the National Autonomous University of Mexico in 1982. After completing a post-graduate residency training in Pathology at the National Institutes of Health in Mexico City in 1986, Dr Masliah completed a fellowship in neuropathology and neurodegenerative disorders at the University of California, San Diego in 1989. Dr Masliah was recruited both by the Departments of Neurosciences and Pathology at the University of California, San Diego where he is currently Tenured Professor, Director of the Laboratory of Experimental Neuropathology and Director of the Autopsy Service at the UCSD-Medical Center. Dr Masliah has published over 400 original research articles and over 40 books and chapters.

Dr. Pam McLean graduated from the University of Glasgow in 1990. She received her Ph.D. in Pharmacology from Boston University in 1997 and joined the lab of Dr. Bradley Hyman at Massachusetts General Hospital/Harvard Medical School as a post-doctoral fellow shortly thereafter. Dr. McLean went on to join the research faculty as an Instructor in 2001 and was promoted to the rank of Assistant Professor in February 2007.

Stephen M. Strittmatter earned his undergraduate degree from Harvard College, summa cum laude, in 1980. He completed M.D. and Ph.D. training at Johns Hopkins in 1986 with mentorship from Solomon H. Snyder, M.D. He then moved to Massachusetts General Hospital for a medical internship and an Adult Neurology residency. While at Massachusetts General Hospital, he worked as a Research Fellow with Mark Fishman, M.D., exploring the molecular basis of axonal guidance. After a year as Fellow, he served briefly as an Assistant Professor at Harvard Medical School before moving to Yale University in 1993. He is currently holds the Vincent Coates Professorship of Neurology and founded the Yale Program in Cellular Neuroscience, Neurodegeneration and Repair. His research on axonal growth during development and regeneration has been recognized by honors from the Ameritec Foundation, the John Merck Fund, the Donaghue Foundation, the McKnight Foundation, the Jacob Javits Award of the NINDS and the American Academy of Neurology.

Dr. Yang obtained combined M.S. and B.S. (summa cum laude) degrees in Molecular Biophysics & Biochemistry from Yale University in 1991. He then pursued combined M.D./Ph.D. training, with a Ph.D. degree from Rockefeller University in 1998 under the mentorship of Dr. Nathaniel Heintz, and an M.D. degree from Weill Medical College of Cornell University in 2000. After completing his Medicine Internship at New York-Presbyterian Hospital in 2001, and a brief postdoctoral training with Nat Heintz, he joined the UCLA as an assistant professor in 2002. He was a recipient of the McKnight Brain Disorder Award in 2009, and serves on the Scientific Advisory Board of the Hereditary Disease Foundation.

Dr. Yang is the co-inventor (together with Nat Heintz) of the first method to engineer Bacterial Artificial Chromosomes (BACs) for generating transgenic animals. Dr. Yang's laboratory at UCLA has developed a series of novel BAC transgenic mouse models for major neurodegenerative disorders, including Huntington's disease (HD) and Parkinson's disease (PD). Analyses of such models have already yielded novel cellular and molecular insights into disease pathogenesis. Additionally, Dr. Yang's lab is also developing novel molecular and genetic approaches to study how the basal ganglia neural circuitry, particularly the direct and indirect pathway striatal medium spiny neurons, regulate normal behavior and how imbalance of the circuitry may lead to pathological behaviors as observed in movement disorders such as HD and PD as well as in neuropsychiatric disorders.

Supported by an educational grant from Biogen Idec.

Prion-like Protein Propagation of a-Synuclein in Disorders with Dementia and Parkinsonism: Prospects for Immunotherapy Interventions

Parkinson’s Disease (PD) and Dementia with Lewy bodies (DLB) are common neurogenerative disorders of the aging Abnormal accumulation characterized by progressive accumulation of a-synuclein in synapses. Alterations in the balance between factors promoting aggregation, clearance and synthesis of a-synuclein might be centrally involved in the formation of oligomers and the pathogenesis of neurodegeneration. The mechanisms through which these oligomers lead to neurodegeneration include the formation of pores with abnormal calcium flux, mitochondrial dysfunction and alterations in the lysosomal dependent autophagy pathway. In addition, recent studies suggest that propagation of a-synuclein oligomers from neuron to neuron and neuron to glia in a prion-like mode might also contribute to neurodegenerative process. Grafted neuronal precursor cells uptake and propagate a-synuclein oligomers leading to graft dysfunction and neuro-inflammatory responses. While a-synuclein propagate in a synuclein reach environment, deletion of endogenous a-synuclein reduces the dissemination of exogenously applied a-synuclein from neuron to neuron. These findings demonstrate the cell-to-cell transmission of a-synuclein aggregates and provide critical insights into the mechanism of progression and treatment in PD and other a-synucleonopathies. Therapeutic strategies directed at reducing the formation and propagation of a-synuclein oligomers might be critical in developing new treatments for PD and DLB. Among them considerable effort has been devoted in the last few years at promoting the clearance. This can be achieved by increasing lysosomal activity (autophagy) or degradation with immunotherapy or pharmacologically by blocking a-synuclein aggregation with small organic molecules.

This work was performed with support from NIH and Neotope Biosciences. The a-synuclein propagation studies were done in collaboration with Dr. Seung-Jae Lee at Konkuk University Seoul, Korea

The paradoxical appearance of aggregated αsynuclein (αsyn) in naïve transplanted embryonic stem cells in Parkinson’s disease brains has recently been reported, highlighting the possibility of neuron to neuron transmission of αsyn in Parkinson’s disease (PD). Our lab and others have demonstrated, in a cellular model, the presence of αsyn oligomers in the extracellular space, their uptake by neurons, retrograde axonal transport to cell soma, and detrimental effects on neighboring cells. Moreover, we have found that heat shock protein 70 (Hsp70) can chaperones αsyn in the extracellular space and reduce extracellular αsyn oligomer formation and related toxicity. Taken together with recently published data, we provide evidence that extracellular αsyn oligomers may represent a crucial player in the propagation of pathology in PD with their modulation by Hsp70 representing a potential new target for therapeutic interventions.

Huntington's disease (HD) is one of the most common inherited neurodegenerative disorders and is characterized clinically by the mid-age onset of movement, cognitive and psychiatric deficits. HD is caused by a CAG repeat expansion encoding an expanded glutamine repeat near the N-terminus of the huntingtin protein. How the mutant huntingtin (mhtt) causes progressive and selective degeneration of striatal and cortical neurons, leading to symptoms of HD, remains unclear. In this presentation, I will discuss a novel reductionist approach to use conditional Bacterial Artificial Chromosome (BAC) transgenic mouse models of HD to dissect disease pathogenesis at both the cellular and molecular levels. Insights gained from such studies may facilitate the identification of novel therapeutic targets for HD and may be informative for genetic analyses of other familial neurodegenerative disorders.

Sequence-specific nucleated protein aggregation is closely linked to the pathogenesis of most neurodegenerative diseases and constitutes the molecular basis of prion formation. Here we report that fibrillar polyglutamine peptide aggregates can be internalized by mammalian cells in culture where they gain access to the cytosolic compartment and become co-sequestered in aggresomes together with components of the ubiquitin-proteasome system and cytoplasmic chaperones. Remarkably, these internalized fibrillar aggregates are able to selectively recruit soluble cytoplasmic proteins with which they share homologous, but not heterologous amyloidogenic sequences and to confer a heritable phenotype upon cells expressing the homologous amyloidogenic protein from a chromosomal locus.