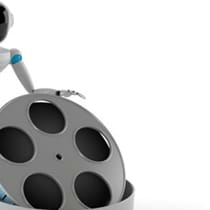 Presented by Science & the City and the Imagine Science Film Festival

If you know anything about science, you understand that it is a highly complex human endeavor that mixes perseverance and luck, eccentricity and training, feasts and famines. As a medium, film has the potential to bring us into the inner world of science, breaking down misconceptions about the nature of science by creating an alternative narrative.

Science & the City teams with the Imagine Science Film Festival (ISFF) to present a panel discussion about telling the stories of science through film. Moderating this panel will be A Planet of Viruses author Carl Zimmer. On the panel will be Sean Carroll, PhD (evolutionary biologist and founder of the Howard Hughes Medical institute's Documentary Institute); David J. Heeger, PhD (neuroscientist who studies the brains under the influence of cinematic stimuli); Darcy Kelley, PhD (biologist at Columbia University); and Valerie Weiss, PhD (scientist and award-winning writer and director, Losing Control).

At this event, ISFF will also presents the Film Lab, a new initiative that brings scientists and filmmakers together to generate short films.

One of the signature traits of being human is our quest to define what it means to "be human." But that definition is always changing—now perhaps more than ever. From virtual reality to mundane reality, science and technology continue to push the boundaries of human existence. In this series, Science & the City will examine what it means to be human in the 21st century.

Other upcoming events in this series:
• System Overload: The Limits of Human Memory, September 6, 2011
• Virtual Humanity: The Anthropology of Online Worlds, November 9, 2011
• Familiar but Strange: Exploring our Relationship with Robots, December 5, 2011
• Matchmaking in the Digital Age, February 15, 2012

Carl Zimmer writes about science regularly for The New York Times and magazines such as Discover, where he is a contributing editor and columnist. He is the author of ten books, the most recent of which is A Planet of Viruses.

Professor of Molecular Biology and Genetics
University of Wisconsin

Sean B. Carroll is an award-winning scientist, author, and educator. He is currently Professor of Molecular Biology and Genetics and an Investigator with the Howard Hughes Medical Institute at the University of Wisconsin. His research has centered on the genes that control animal body patterns and play major roles in the evolution of animal diversity. Major discoveries from his laboratory have been featured in TIME, US News & World Report, The New York Times, Discover, and Natural History.

David J. Heeger is a Professor of Psychology and Neural Science at New York University. He received his PhD in computer science from the University of Pennsylvania. He was a postdoctoral fellow at MIT, a research scientist at the NASA–Ames Research Center, and an Associate Professor at Stanford before coming NYU. His research spans an interdisciplinary cross-section of engineering, psychology, and neuroscience, the current focus of which is to use functional magnetic resonance imaging (fMRI) and computational theory to quantitatively investigate the relationship between brain and behavior. He was awarded the David Marr Prize in computer vision in 1987, an Alfred P. Sloan Research Fellowship in neuroscience in 1994, the Troland Award in psychology from the National Academy of Sciences in 2002, and the Margaret and Herman Sokol Faculty Award in the Sciences from New York University in 2006.

Valerie Weiss, a critically-acclaimed, award-winning writer-director-producer, is the founder of PhD Productions. She recently completed her first feature film, Losing Control, a fresh and funny independent comedy about a female scientist who wants proof that her boyfriend is "the one." Losing Control will be released in theaters in early 2012. Dr. Weiss began her writing and directing career while at Princeton where she earned a dual degree in Molecular Biology and Theatre. After Princeton, she founded Harvard University's renowned Dudley Film Program and served as its Filmmaker-in-Residence while earning her PhD in Biophysics at Harvard Medical School. While writing her dissertation, Valerie directed her first film and, two weeks after wrapping production, defended her PhD thesis... and never did another experiment. Shortly thereafter, she moved to Los Angeles, where she completed the American Film Institute (AFI) Directing Workshop for Women and directed the BAFTA-winning short, Transgressions.

In addition to her work as a scientist and a filmmaker, Valerie has appeared on the L'Oreal For Women in Science: Shaping A New Image Panel, where she spoke alongside astronaut Sally Ride about the importance that film and television will play in reshaping our image of women scientists. She also participated on the Newsweek Advisory Committee for its Women in Leadership issue.

Valerie is currently developing her next two film projects, Overstuffed and Positively Negative, and resides in Los Angeles with her husband and two young daughters.

Darcy Kelley studies vocal communication focusing on molecular, behavioral and evolutionary mechanisms that underlie the exquisite match between hearing and specific vocalizations. Using molecular, genomic and highly sophisticated physiological methods, she has identified sex-specific structures, neural circuits and interactive vocal behaviors that shaped by the expression of sex steroids and their receptors in African clawed frogs. In addition to the research program in her laboratory, she has a long-standing interest in the portrayal of science in theater and films. Dr. Kelley serves as a scientific consultant for the EST Sloan Project and has been a jurist for the Tribeca, Sundance and Imagine Film festivals and a panelist at the Tribeca Film Institute Sloan Science Summit, Sundance, Imagine, and East Hampton Film Festivals.