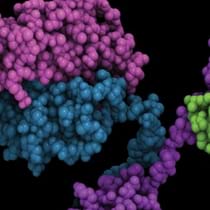 The development and commercialization of monoclonal antibodies has revolutionized medical care with exquisitely targeted drugs that interact with critical protein targets that play important roles in disease pathogenesis.  Today, numerous marketed antibodies are used to treat a variety of diseases, including cancer and autoimmune and inflammatory diseases, for which small molecule drugs are largely ineffective.  Antibodies are complex proteins with several domains, including an antigen-binding domain and an effector domain that interacts with a variety of cells of the immune system.  The development of monoclonal antibodies as therapeutic agents has progressed through several stages. The first monoclonal antibodies were from rodents and unfortunately stimulated a host response against the antibody itself.  This prompted the development of chimeric, humanized and then fully human antibodies. In addition, the unique manufacturing process and regulatory procedures virtually assured that generic monoclonal antibodies, or so-called 'biosimilars,' could not be easily manufactured and launched. However, the increased market share of highly priced therapeutic antibodies—expected sales by 2012 are projected at approximately $50 billion—are beginning to trigger changes in regulatory procedures that will pave the way for biosimilar antibodies. Partly to create a proprietary platform to avoid losing market share to biosimilar antibodies and partly to enhance the efficacy and safety of monoclonal antibodies, investigators have created innovative truncated, fusion, or otherwise structurally modified monoclonal antibodies. The objective of this symposium is to provide insight into several novel approaches in the design and manufacturing of structurally-modified monoclonal antibodies with improved properties.

* Presentations times are subject to change

Patrick Baeuerle has served as Micromet’s Chief Scientific Officer since May 2006, and was Chief Scientific Officer of the Company’s subsidiary Micromet AG from 1998 to 2006. From 1996 to 1998, Dr. Baeuerle oversaw drug discovery at Tularik Inc, a publicly traded biotechnology company that was acquired by Amgen. From 1994 to 1996, Dr. Baeuerle served as a full Professor and Chairman of Biochemistry at the Medical Faculty of Freiburg University, Germany. In 1989, he was awarded a group leader position at the Gene Center in Martinsried, Germany, where he did seminal research on transcription factor NF-kappaB. According to a survey conducted in 2000 by the Institute for Scientific Information, Dr. Baeuerle was Germany’s most frequently cited biomedical scientist of the past decade, and 38th worldwide. He has published more than 220 scientific papers. In addition, Dr. Baeuerle is the first recipient of the Prix Européen de l’Avenir and an elected member of the European Molecular Biology Organization (EMBO). He was appointed Honorary Professor of Immunology at the University of Munich in 2000. Dr. Baeuerle performed his Ph.D. work at the Max Planck Institute for Psychiatry in Martinsried and at the European Molecular Biology Laboratory (EMBL) in Heidelberg, obtained a Ph.D. degree in biology from the University of Munich, and performed his post-doctoral research with David Baltimore at the Whitehead Institute of the Massachusetts Institute of Technology.

Dr. Benjamin is Executive Director, Experimental Therapeutics at Seattle Genetics where he directs preclinical research into empowered antibody technologies including antibody-drug conjugates and effector-enhanced antibodies. Previously he was Director, Biochemistry at Praecis Pharmaceuticals where he was co-inventor of the company's DNA-encoded synthetic library technology and LC/MS based biomarker discovery platform. He studied Chemistry at MIT, Medicinal Chemistry at UCSF, and was a Hitchings-Elion Postdoctoral Fellow at the University of Oxford.

Steven Olsen, MD, PhD is senior group medical director and global development team leader for trastuzumab emtanisine (T-DM1) at Genentech, Inc., a member of the Roche group. He oversees worldwide late stage development of T-DM1. He earned his MD from Oregon Health Sciences University and a PhD in cellular and molecular biology from the University of Michigan where he studied signal transduction pathways. He trained in internal medicine at UC San Diego and completed his medical oncology fellowship at UC San Francisco, with a clinical emphasis on breast cancer treatment. He held a number of medical affairs positions at Sanofi in the US, Japan, and France before joining Genentech. Prior to joining the T-DM1 development team, he worked within Genentech medical affairs to support early access programs and post-marketing clinical programs for targeted therapies, including the BRAF inhibitor vemurafenib and the hedgehog pathway inhibitor vismodegib.

Jeffrey V. Ravetch, MD, PhD is currently the Theresa and Eugene Lang Professor at the Rockefeller University and Head of the Leonard Wagner Laboratory of Molecular Genetics and Immunology. He is a graduate of Yale University, Rockefeller University and Cornell Medical School, has published over 155 papers in the highest profile journals and received numerous awards for his research including the Coley Award in 2007. His laboratory cloned the first genes for Fc receptors, identified the SHIP inhibitory receptor signaling pathway and contributed significantly to understanding the mechanisms of antibody mediated effector responses, establishing the FcR pathways as fundamental components of the immune response. He is a member of the National Academy of Sciences, the Institute of Medicine, the American Academy of Arts and Sciences and the American Association for the Advancement of Science.

The diversity of antibody recognition, encoded by the variable regions, is mirrored by the diversity of the effector responses, encoded by the Fc domain. The Fc domain of IgG antibodies is essential to the triggering of inflammatory responses, critical to host defense, such as pathogen clearance, viral and toxin neutralization, as well eliciting pathogenic inflammatory responses, central to the pathogenesis of autoimmune diseases such as SLE and RA. In addition to these pro-inflammatory effector properties of IgG antibodies, the Fc domain of IgG is also responsible for initiating anti-inflammatory responses through a novel pathway that involves the modification of the Fc glycan. IgG antibodies are key regulators of the immune response through their ability to modulate antigen presenting cell activation and, consequently, T cell activation, as well as control the survival of long-lived plasma cells. This diversity of effector responses embedded in the Fc domain is achieved through diverse receptors that can selectivity engage the Fc domain and mediate divergent cellular responses. The lecture will focus on the structure and function of these diverse Fc receptor families, including the FcγRs and the SIGN lectins, and the structural diversity of the Fc ligands that distinguish among these receptors.

Trastuzumab emtansine (T-DM1) is an antibody-drug conjugate in development for the treatment of HER2 positive tumors. It is composed of the humanized monoclonal antibody trastuzumab, a non-reducible thioether linker, and the potent cytotoxic agent DM1, a derivative of maytansine. The proposed mechanism of action of T-DM1 combines the known targeting and anti-cancer activities of trastuzumab, which is approved for the treatment of HER2 positive early and metastatic breast cancer (MBC) and metastatic gastric cancer, with the anti-microtubule activity of DM1. In patients with previously treated HER2 positive MBC, T-DM1 has demonstrated clinical efficacy with an acceptable safety profile. Ongoing Phase III clinical trials in HER2 positive MBC compare T-DM1 to standard therapies such as capecitabine and lapatinib or taxanes and trastuzumab.

Monoclonal antibodies (mAbs) have played a major role in cancer medicine, with active drugs such as trastuzumab (Herceptin), cetuximab (Erbitux), bevacizumab (Avastin) and rituximab (Rituxan) used in a wide range of therapeutic applications. In order to improve activity, attention has turned towards enhancing mAbs with a number of strategies, including enhancing the innate ADCC activity. Towards this end, we have identified biochemical inhibitors of the enzymes fucosyl transferase and GDP-d-mannose dehydratase (GMD). The inhibitors are fucose analogues, and can be added to cells that produce mAbs; the resulting defucosylated mAbs demonstrate substantially enhanced ADCC activity.

mAb activity can also be enhanced by appending highly potent cytotoxic drugs to them. While this idea has been in existence for many years, it is only recently that mAb-drug conjugates have demonstrated the potential of playing a convincing role in cancer chemotherapy. The field has advanced significantly, with new insights gained into the roles that antigen target, normal tissue expression, drug potency, drug mechanism, linker stability, and mechanism of drug release play in generating active antibody drug conjugates (ADC) with acceptable safety profiles. Brentuximab vedotin (SGN-35) is an example of an ADC that has been designed with these parameters in mind, and has shown promising activities in pivotal clinical trials.

Bispecific antibodies can transiently link tumor cells with T lymphocytes of patients for induction of a potent redirected lysis of tumor cells. One example is blinatumomab (MT103), a CD19/CD3-bispecific bispecific T cell-engaging (BiTE) antibody for the treatment of human B cell-derived malignancies. A phase 2 study in acute lymphocytic leukemia (ALL) patients has shown an 80% complete molecular response rate at a dose level of 15 micrograms/squaremeter per day. In non-Hodgkin’s lymphoma (NHL) patients with relapsed or refractory follicular and mantle cell lymphoma, the rate of centrally confirmed complete and partial responses according to Cheson criteria exceeded 80% at a dose level of 60 micrograms/squaremeter/day. First signs of efficacy have also been observed in patients with diffuse large B cell lymphoma (DLBCL). Blinatumomab now is in a pivotal study for the treatment of adult patients with therapy-refractory ALL.