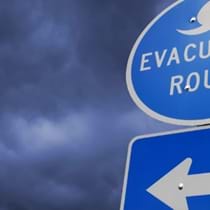 Presented by the Greening Transportation and Infrastructure Discussion Group

Extreme weather events often disrupt transportation infrastructure, thus impacting the vital economic and social networks of cities and compromising the means to escape the consequences of these events. This upcoming panel discussion addresses the New York City experience in building transportation system resilience given the overarching context of severe weather and climate events and their impacts.

Rae Zimmerman is Professor of Planning and Public Administration at New York University's Wagner Graduate School of Public Service and since 1998, Director of its Institute for Civil Infrastructure Systems (ICIS www.nyu.edu/icis). Her research and teaching include transportation from the perspectives of sustainability, climate change, natural hazards, environmental impacts and security. Publications in these areas appear in the Journal of Risk Research, Risk Analysis, the Journal of Applied Security Research, the Journal of Urban Technology, and Current Issues in Environmental Sustainability. Through ICIS, she co-produced Beyond September 11th (U. Colorado Boulder 2003) and co-edited Digital Infrastructures (Zimmerman and Horan 2004) and Sustaining Urban Networks (Coutard, Hanley and Zimmerman 2005).  She is a Fellow of the American Association for the Advancement of Science, past president and Fellow of the Society for Risk Analysis, an appointed member of NYC Panel on Climate Change, and an appointed member of the Homeland Security Advisory Committee of the U.S. Environmental Protection Agency's Science Advisory Board. In 2010 and 2011 she presented at the Transportation Research Board Annual Meetings under the auspices of the TRB Critical Transportation Infrastructure Protection committee. Education: B.A. in Chemistry from the University of California (Berkeley), Master of City Planning from the University of Pennsylvania, and Ph.D. in planning from Columbia University.

Thomas Abdallah, P.E. LEED AP, Chief Environmental Engineer for the Capital Program Management Department (CPM) of MTA New York City Transit. He holds a B.S. in Chemical Engineering from Rutgers University and he is both a Professional Engineer and a LEED® Accredited Professional. Thomas has been with NYCT for 24 years and has extensive experience with all areas of the environmental disciplines including the National Environmental Policy Act, Waste Management, Air & Water Pollution Prevention, and Green Design.

Adam Freed is the Deputy Director of Mayor Bloomberg’s Office of Long-Term Planning and Sustainability, which was charged with developing and implementing New York City’s long-term sustainability plan (“PlaNYC”). Since releasing PlaNYC in 2007, the City has enacted landmark legislation to increase energy efficiency in existing buildings, invested $80 million a year to reduce City government’s greenhouse gas emissions, and a launched comprehensive climate resilience program. Freed developed the City’s resilience efforts and chairs the NYC Climate Change Adaptation Task Force, which consists of 40 city, state, and federal agencies and private companies and is identifying climate vulnerabilities to the city’s critical infrastructure and developing strategies to mitigate these risks. Freed has over 10 years of experience in city and state government. Prior to joining the Bloomberg Administration he served as the Assistant Comptroller for NYC in the Office of the New York State Comptroller. He also worked on several city, state, and national political campaigns. Freed received his master's in Urban Planning from NYU and is a member of the American Institute of Certified Planners. He currently resides in New York City’s Lower East Side with his wife and sons.

Kenneth E. Kunkel is Lead Scientist for Assessments with the NOAA Cooperative Institute for Climate and Satellites and Research Professor with the Department of Marine, Earth and Atmospheric Sciences, North Carolina State University. He holds a B.S. degree in physics from Southern Illinois University-Edwardsville and M.S. and Ph.D. degrees in meteorology from the University of Wisconsin-Madison. His research has focused on regional climate variability, extremes, change, and modeling and he has published numerous scientific articles and book chapters on these topics. He has led several projects on the development and quality control of U.S. surface climate datasets used for evaluation of long-term historical trends in extreme climate events, including extreme precipitation, heat and cold waves, and snowfall. He has performed several diagnostic analyses of global and regional climate model simulations, focused on various aspects of the climate of the U.S. He is one of the lead authors on two recent synthesis and assessment reports of the U.S. Climate Change Science Program, entitled Weather and Climate Extremes in a Changing Climate and Climate Change Models: An Assessment of Strengths and Limitations.

Angela Licata is a Deputy Commissioner for the New York City Department of Environmental Protection (NYCDEP) and the director of the Bureau of Environmental Planning and Analysis (BEPA).  She has worked for over 20 years with a diversified portfolio in the field of drinking water and wastewater infrastructure and is engaged in key initiatives for ensuring that long-term sustainability objectives are met. These include the opportunities for green infrastructure, water conservation, and improved harbor water quality. Ms. Licata oversees the forecasting and projections for water consumption, trend analysis, regulatory review, and scientific modeling and research.  She is currently overseeing multiple planning efforts to increase storm water management, develop strategies and data for climate change adaptation, provide Superfund support for two recently listed NYC water ways (Gowanus Canal and Newtown Creek).  She also directs efforts related to watershed plans for the protection of Jamaica Bay and supervises staff that are pioneering ecological recovery and restoration initiatives for New York Harbor.   Ms. Licata is a graduate of the State University of New York at Binghamton, where she earned a BA in Political Science with a concentration in Environmental Policy from Harpur College.

Andy Wiley-Schwartz is an Assistant Commissioner for Planning and Sustainability at New York City Department of Transportation.  Andy was hired by Commissioner Janette Sadik-Kahn in 2007 to develop a public space program, and a complete street design and planning process for DOT.  In this capacity he developed and launched the NYC Plaza Program, an initiative of Mayor Bloomberg's PlaNYC2030 to develop new public spaces out of existing streets in communities across New York City.  He also co-managed the development of the New York City Street Design Manual, an effort to streamline and standardize streetscape improvements on New York City's streets.  In addition, Andy has supervised several special projects for the DOT Commissioner including a contract with Danish Architect Jan Gehl to measure, evaluate and promote public life in New York.

Prior to working at NYCDOT, Andy was a Vice President at Project for Public Spaces, Inc. where he directed their Transportation Program.  He supervised and coordinated PPS's key transportation projects, including DOT training programs, corridor management projects, main street and downtown street enhancement, traffic calming and bicycle/pedestrian projects.   In addition to his training and project work, Andy has conducted in-depth research into park partnerships, transportation facility development, public space programming and downtown and neighborhood revitalization programs.  Prior to working at PPS, Andy was a political analyst for Washington Analysis Corporation, an investment research firm, where he wrote and commented on political affairs and the impact of trade, monetary, and domestic policy on the financial markets.

For sponsorship opportunities please contact Michel Wahome at mwahome@nyas.org or 212.298.8628.